Good morning, early birds. Our leaders are back from holiday, but the debate sounds exactly the same. It's the news you need to know, by Sally Whyte and Max Chalmers.

Prime Minister Malcolm Turnbull has labelled Opposition Leader Bill Shorten a “shallow populist” and “a disgrace to the legacy of economic reform that his predecessors as leaders of the Labor Party demonstrated, Hawke and Keating in particular”. The war of words is over the Trans Pacific Partnership, Turnbull’s pursuit of which Shorten has called a “waste of time”. The Australian says this means Shorten is siding with US President-elect Donald Trump, who is stridently against the 11-country trade deal. Neither leader announced a new position on the TPP; they’re just warming up their insults after the summer break.

Police commissioners from around the country are set to make a landmark apology to victims of child sex abuse in institutional care, reports The Australian‘s Dan Box in an exclusive today. The report cites a letter sent last week by Victorian Police Commissioner Graham Ashton, in which an apology is mooted after the final report of the Royal Commission into Institutional Responses to Child Sex Abuse is due in December this year.

We have not heard a lot about the 12,000 “extra” Syrian and Iraqi refugees Tony Abbott was pressured into agreeing to accept into Australia in the wake of the famous Alan Kurdi picture, but The Sydney Morning Herald today has the story that at least half of them will be settled in Fairfield council area, in Sydney’s west. Fergus Hunter reports: “Across the one-off 12,000 cohort and the regular humanitarian program, Fairfield took in 75 per cent of all western Sydney’s refugee intake, with Liverpool City Council second at 14 per cent.” More than 9000 Syrian and Iraqi refugees of the additional 12,000 have arrived in Australia since September 2015, when Abbott made the announcement. Fairfield Council has asked the federal government for money and support to create services for its new residents.

Davos, Switzerland: The World Economic Forum runs from January 17 to 20, meaning it opens overnight. The annual meeting is a who’s who of international leaders in economics and politics, and this year’s theme is “”responsive and responsible leadership”. Chinese President Xi Jinping will attend for the first time, and even though President-elect Donald Trump won’t be there (he has the small matter of his inauguration to attend), he will be a major topic of conversation.

Melbourne: Day two of the Australian Open takes place today, with Serena Williams and Rafael Nadal taking centre court. Yesterday was full of good news for the Australians (we can’t always say that after the first round of our home grand slam). Nick Kyrgios (below) had a straight sets win against Gastau Elias, and its the first time since 1999 that Australian teenagers have won first round matches on both the women’s and men’s sides of the draw, with Jaimee Fourlis and Alex De Minaur both having wins yesterday. There are 10 Australians on court today, and the full schedule is here. 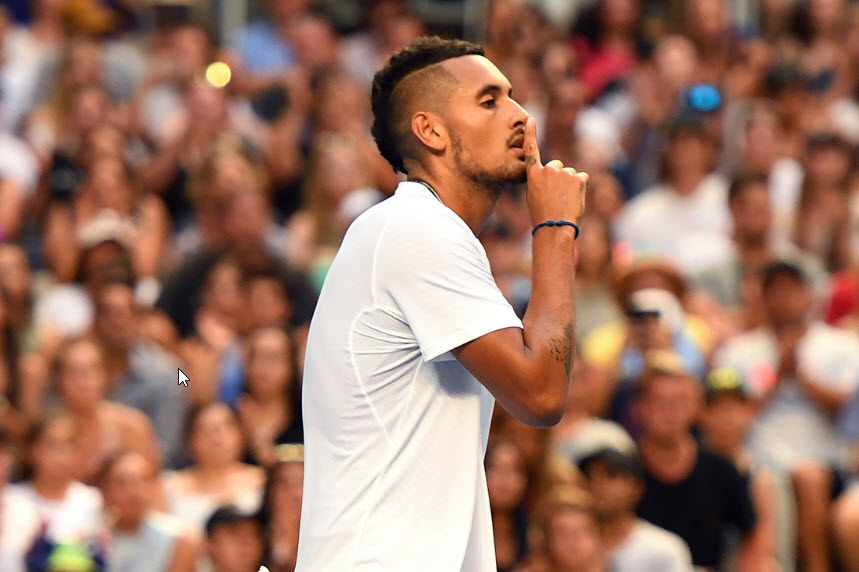 Sydney/Melbourne: Former Senator Bob Day is back in court today, with the High Court sitting as the Court of Disputed Returns. Day’s eligibility to be elected at the 2017 poll is being challenged “on the grounds he received an indirect benefit from the government in relation to his Adelaide electorate office”, AAP reports.

London: The trial of Rolf Harris continues. Overnight the court heard that Harris allegedly groped a blind, disabled woman at Moorfields eye hospital in London in 1977.

Lurks, perks and entitlements: how MPs consolidate themselves as a distinctive caste — Jeff Sparrow (Guardian Australia): “With every day bringing new revelations about politicians abusing their entitlements, it’s easy to forget that the remuneration of MPs was a goal achieved only after a long social struggle: a leftwing demand intended to make democracy more accessible to the people.”

The ministers leading the war on the poor — Jenna Price (Sydney Morning Herald): “The cascade of harm from the Centrelink automated debt notifications debacle now includes providing too little legal help for those who need it most. And the little offered them now will disappear in July.”

March on, but remember girls mutilated at home — Caroline Overington (The Australian $): “…which is more important? Macho bragging about pussy-grabbing in a trailer on the set of The Apprentice? Or acts of extreme violence against girls — and the rights of girls — here and now?”

Syrian rebel groups have agreed to join peace talks sponsored by Russia and Turkey. While at least one of the disparate groups fighting Bashar al-Assad’s Syrian regime has said it will refuse to join, other groups told The Guardian they would attend with the aim of shoring up the present ceasefire. Barriers to a lasting political agreement remain high, with rivalries between rebel groups and Iran’s commitment to prevent regime change among the many difficulties. — The Guardian

Comments by US President-elect Donald Trump have caused “worry and concern” among NATO allies, according to German Foreign Minister Frank-Walter Steinmeier. In an interview with a German and a British newspaper, Trump called NATO “obsolete” and castigated it for failing to tackle terrorism. He also criticised German Chancellor Angela Merkel’s response to Europe’s refugee crisis and warned German car companies using factories in Mexico would be targeted by tariffs. German Vice-Chancellor Sigmar Gabriel hit back, blaming US interventionism in the Mediterranean and Middle East for spiking migration rates. — BBC

The world’s richest eight men have as much wealth as the bottom half of the global population, according to a new Oxfam report. Released at the World Economic Forum in Davos, Oxfam’s findings have altered from previous reports as a result of a re-evaluation and lowering of the estimated wealth held by the global poor. — The New York Times

Five people have been killed after a man with a weapon was prevented from entering a Mexican nightclub, sparking a gunfight that included security staff. The incident occurred at the Blue Parrot club, which was participating in the BPM music festival, an event that draws top international DJs. Several Australian witnesses, including DJ Wax Motif, described the chaos that erupted after the shooting began. — Reuters

Letter From Birmingham Jail (The Atlantic): “King’s famous letter, published in The Atlantic as “The Negro Is Your Brother” several months after its original writing, was written in response to a public statement of concern and caution issued by eight white religious leaders of the South. It stands as one of the classic documents of the civil-rights movement.”

The return of civil disobedience (The New Yorker): “The Congress is unlikely to check the new President, but democracy may thrive in the states, the courts, the next elections, and, lest the lessons of the sixties be forgotten, the streets.”