Dasher has found a new calling.

Labor Senator Sam Dastyari has been spending a lot of time doing the Jailhouse Rock as penance for the donations scandal that cost him his job in the shadow cabinet, but now he’s possibly found a new calling in life as an Elvis tribute artist. Dastyari visited the NSW town of Parkes on the weekend, where the 25th annual Elvis festival descends on the town in January each year to pay homage to the King of Rock’n’Roll. Dastyari first interviewed Elvis fans about his prospects of impersonating Elvis and was told those dressed in jumpsuits with sunglasses and wigs were called “tribute artists”, not impersonators. By the end of the video we see Dastyari himself in full Elvis mode, dressed as “halal Elvis”. We had suspicious minds, but he does a decent job. 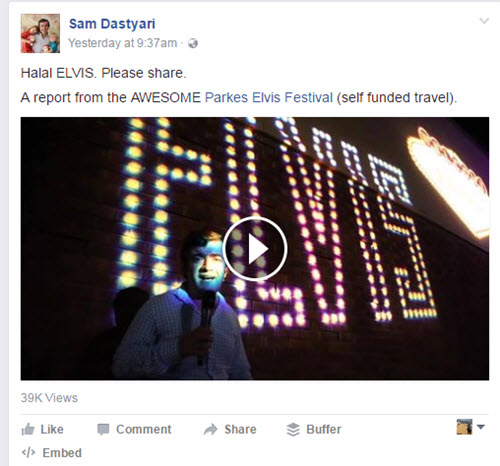 Thank you, thank you very much.