The 457 visa system is rorted and plagued with scandals but it also benefits an economy undergoing significant change.

If you listen to Opposition Leader Bill Shorten in Labor’s current campaign against the 457 visa system, you could be forgiven for thinking the scheme was doing honest blue-collar Aussies in traditional industries like construction and manufacturing out of a job — taken by a foreigner brought in by an unscrupulous employer.

Abuse of the scheme is indeed extensive, and construction employers have been regular abusers of 457 visa and student visa systems to exploit foreign workers. And as we’ve seen from Caltex and 7-Eleven, retailers have also used the 457 and student visas systems unethically and illegally.

But a look at the numbers from 457 visa statistics shows that the scheme has been important in responding to a changing economy. In 2009-10, 457 applications, which had declined to 40,000 that year, were dominated by three industries: healthcare, ICT and construction. Manufacturing, previously a large industry for 457s, had applications more than halve to 2190; mining also fell significantly.

But the following year numbers rebounded again, to over 50,000. Construction and mining both surged as sources of applications, as did ICT. But manufacturing failed to recover ground again, and a hitherto small industry, professional scientific and technical services, surged to be almost equal to manufacturing.

Construction and mining both continued to grow rapidly as sources of applications in 2011-12, which rose to over 70,000. More than 13% of applications were for construction, easily the biggest industry, as the mining construction boom powered along. Mining rose more than 60%; health and ICT continued to grow steadily as well; even manufacturing rebounded, but professional services overtook manufacturing and another industry also appeared prominently: accommodation and food services (cooks now appeared as the sixth most common application).

We can thus see the 457 system responding to the mining boom when it was needed, while longer-term trends continued changing the economy.

The next year, 2013, accommodation and food became the biggest source of applications and cooks the most common job; cafe and restaurant managers also appeared on the list of most common jobs. Construction was still strong, as well as the health and IT stalwarts, but manufacturing went backwards again. In 2013-14 there was a big drop in applications, by around 40%, reflecting the slowing economy; the main categories were now accommodation and food, health, ICT and professional services; manufacturing slumped further, over 40%, and mining declined significantly as well. The top two jobs were cooks, and cafe and restaurant managers. 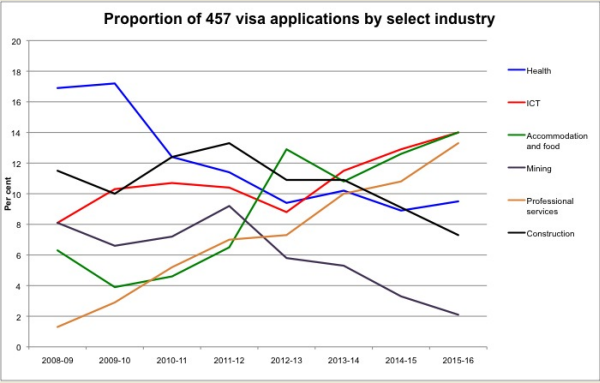 In 2014-15, cooks were still king, along with programmers, though health marked time from the slump the previous year. Mining fell by nearly a third and construction failed to recover from the previous year, too; professional services was the second biggest industry.

And last year (when there were a total of 53,000 applications, around the same as in 2008), according to the most recent quarterly report cooks and programmers were still dominant; construction had fallen again, mining fell to almost negligible levels (just 2% of applications) and services continued its strong growth. Manufacturing was less than 5% of applications.

[How to employ more Aussies and reduce 457 visa rorting]

There are some micro and macro trends here: health has long been a big user of 457s but that has declined somewhat recently, whereas Australia’s IT sector remains a big user of the visas for its staff. As interesting are the macro trends: the mining industry understandably drifted off the 457 radar as the boom came to an end. Construction, too, is significantly lower, at its lowest point in the last eight years. But the use of 457 visas for professional services jobs has come from virtually nowhere to be one of the most important sources of visa applications. And the surge of cooks reflects the years-long growth of cafes and restaurants, which has resulted in that sector booming well ahead of the growth of other Australian businesses.

The numbers provide some grist for Labor’s campaign for more training and fewer 457s. The tech industry clearly continues to rely on 457s and any investment it has made in training Australians in areas like software development — which some in the industry complain doesn’t happen — has been dwarfed by the decline in Australian STEM (which, admittedly, both Labor and the Coalition have developed policies to address). But health — which is Australia’s biggest and frequently fastest-growing employer — is now bringing in fewer 457 visas than back in 2008 despite employing around 400,000 more Australians in that period.

And there’s no better illustration of the long-term shift in the Australian economy than how manufacturing is almost irrelevant for 457 visa applications, while professional services is now a key industry. The foreign workers attacked by Labor for stealing Australian jobs are very different to the blue-collar image its campaign conjures.

A fairly scholarly review, relevant only to dry economists. Nowhere do I see any mention of people …. just “the economy”, “business sectors” and the like.

457 visas popped up as a way basically for business to avoid its social contract to participate in training of young Aussies for work in the market place. Double whammy: no training costs, and exploitation of foreign workers with lower wages.

Great for the economy? It’s hard to see it. Aussies don’t get trained, don’t get jobs go on welfare. Foreign workers tend to send money out of the country. It IS great for business, whose costs are screwed ever down, and their profits increase. They don’t pay tax on that, and where does the money go? Out of the country, to join the PM’s wealth in a tax haven.

There’s no long term benefit in this for Australia, no matter what you economic psychopaths appear to believe about “the economy”.

I can’t see why ICT 457 visa’s are at all appropriate while current Australian ICT graduates can’t get work. I can’t help but conclude that the 457 visas are being used to simply reduce costs and not to fill position where no skills exist. There are plenty of graduates willing to fill those positions. With the IT industry’s predilection of not hiring people over 40 there are panty of experienced people too.
If there is any industry where 457 visas should be sparingly used it is the IT industry.

Anyone working in IT in this country will tell you there are many, many “programmers” looking for work.

I cannot even fathom why anyone would think we need to be importing cooks.

457s are appropriate to handle needs for highly specialised and unique skills which do not exist locally and cannot be created in a reasonable timeframe, or when there is an actual shortage of workers (ie: unemployment is low to zero). Can anyone seriously argue with a straight face that is how they have, and are, being used for the last decade or two ?

Agree with Smithy.
There has always been capacity for employers to bring in highly skilled workers with skills not readily available in Australia. Skills transfer and a satisfactory record of recruiting and training Australians used to be a requirement. Why any employer was allowed to bring in a cafe manager is a mystery as this is a learn-on-the-job job. Cooks are a perennial problem. An awful lot of these are scam applications, not the celebrity chef type of chef that Bernard might be thinking about, but often someone’s brother or mate rather than a genuine vacancy for a cook.
As for health workers, I know of at least one hospital which got rid of all its senior, older, more expensive nursing staff through a sham dismissal process that nurses were too frightened to challenge and then brought in overseas workers who were qualified but could be paid less and could also be required to work unreasonable shift arrangements that locals wouldn’t accept.
Australia has always benefited from the entry of highly skilled workers and skills transfer but the introduction of the 457 visa to replace the former 414 Specialist visa seems to have allowed far too many scams.

Your comment, and all those above, are spot on JMNO.
In the area I know best, healthcare, there are not even enough places in our hospitals to employ graduating nurses to complete there graduate year. This is a requirement for registration. Also, I’m reliably informed that some of the nurses being employed from overseas can’t speak or understand English well. This leads to increasing patient frustration/complaints and, more importantly, the question of safety in such areas as medication administration, understanding treatment ordered, etc.
So why continue to bring in nurses and other health workers when we have a plentiful supply here in Oz who can’t get jobs?
I think Bill Shorten is correct in advocating an inquiry into the whole 457 rort!