American political TV channel C-SPAN (which shows “gavel-to-gavel” coverage of the US Congress) says it is investigating after its live coverage of US House of Representatives suddenly switched to a live feed of Russia Today. Yes, that’s the Kremlin-backed, English news channel of Russia, which was showing on C-SPAN for about 10 minutes before the feed was switched back, Politico reports. Deadspin editor Tim Burke recorded a video of the change, and uploaded it to Twitter: 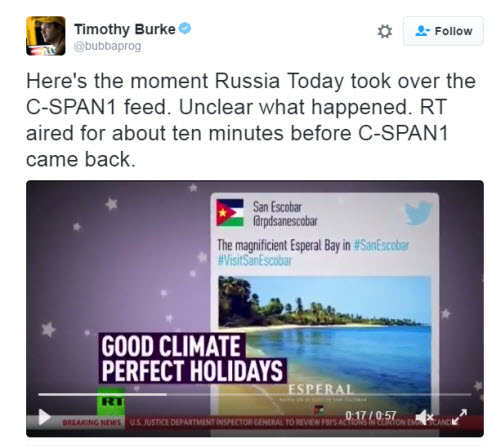 C-SPAN explained in a statement “As RT is one of the networks we regularly monitor, we are operating under the assumption that it was an internal routing issue”.

RT news is smarter and more informed than anything we have to offer!