And just wait until you see his homemade online polls.

Like politician’s expenses, stories about the online postings of One Nation candidates are becoming a daily occurrence. Today it is Peter Rogers, who will run for the Queensland seat of Mulgrave in the state election this year. BuzzFeed reported on his blog posts, in which he says the photo of Syrian toddler Alan Kurdi, lying dead on a Turkish beach, was fake, as was the Port Arthur massacre. Rogers’ website is a revealing insight into his ways of thinking, with posts on conspiracy theories, global warming and the United Nations, but it was taken down just before 10.30 this morning.

Rogers also gave visitors to his website the chance to take part in many polls on issues he cares about, including Queensland’s bikie laws, the United Nations and halal certification. The polls gave a few options chosen by Rogers (we presume) but also the opportunity to add your own answers, which are then available to others to view. One poll asks “should treason/sedition laws be brought back in and those found guilty executed?” and the options included “yes if there is no doubt they committed the crime” “laws are too tough as it is” and “Absolutely, there has to be severe punishment for betraying a nation. Whatever the majority decide I would support. I do not believe most citizens of Australia want to be involved with the UN or the EU at this time in history.” It’s unclear if that last one was provided by Rogers or added by a reader. 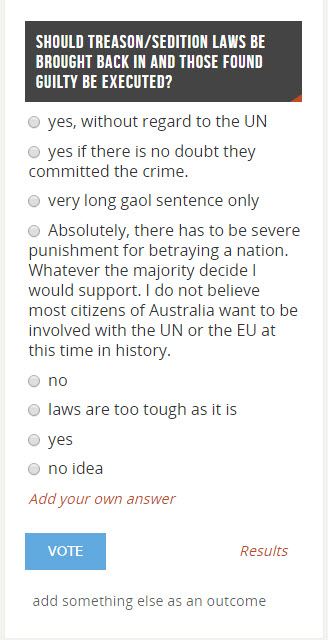 The option to add answers to the polls has created a few issues though, with the two polls attached to the article about Alan Kurdi. One asks “do you believe the drowned boy story?” and the possible answers include “Peter Rogers is a goose,” “peter Rogers is a mad cunt” and “Peter Rogers has the face of a smashed meat pie”. Another poll asked “Do you think Abbott was an innocent victim of the Turnbull/Abbott coup?”, and the answers given included the (obviously false) and particularly vitriolic “Peter Rogers gave aids to monkeys first”. 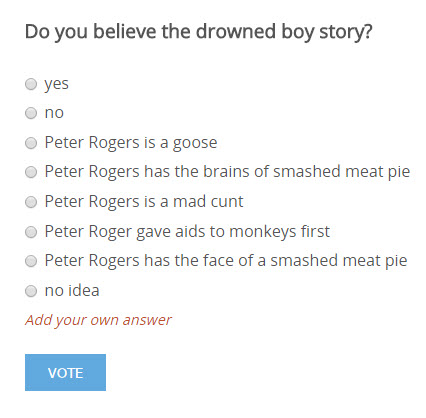 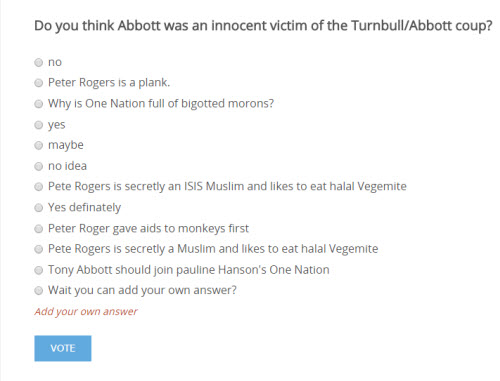 This is fantastic, these one nation wannabies are coming out on a daily basis like a deliciously mind numbing advent calender.

Gotta hand it to those PHON talent scouts ,scanning the sunburnt countryside to bring us the best of the worst wherever they can find them.