On Wednesdays we wear white

Three women turned up in white to discuss golden showers. 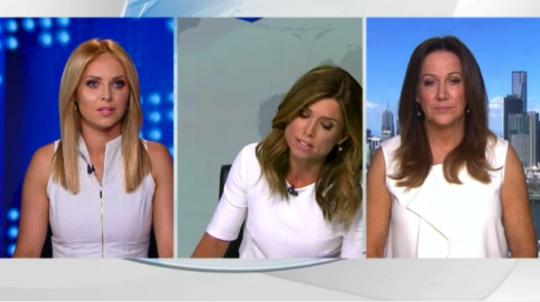 How vapid is commercial television?

Vapid enough that the colour of a presenter’s top can mean minutes of very tense discussion in the seconds before a live news bulletin. Nine News’ Amber Sherlock is being pilloried today, after Mumbrella published a video of her berating sports reporter Julie Snook for wearing a white outfit too tonally similar to those worn by Sherlock and guest Sandy Rea.

SHERLOCK: “I need Julie to put a jacket on … I asked her before we came on … I told you two hours ago.”

SHERLOCK: “I made this clear two-and-a-half-hours ago.”

SHERLOCK: “It is an issue. Go and grab a jacket … I wasn’t saying it for no reason. The wardrobe girls will be furious downstairs.”

SNOOK: “If there’s an issue I can just head on out and get back to work because I’m flat-chat, I genuinely forgot.”

SNOOK: “Amber, please, this is not the only thing I’m doing today.”

It seems the video was in wide circulation, though according to the Daily Tele, the leaker has been found.

Wardrobe is seen as crucially important in commercial TV news, as one Nine insider told news.com.au. “I’ve seen some big tantrums about presenters being given similar outfits to colleagues. This is not a rarity. Some stars often claim the others are getting preferential treatment because they got to wear some brand or another. It’s all paranoid stuff, but it sets them off.

“Producers often wish that some presenters cared as much about the content as they do about the colour of their top.”

The presenters issued a statement last night to Nine-owned 9Honey (Nine’s “women’s publication”), trying to make light of the situation, with Sherlock saying she “probably overreacted”.

“What can I say? Amber and I just really love white!” said Snook. “Amber and I are good friends, and I really enjoy working with her, News is a fast-moving environment, and sometimes these things happen.”

After watching the two women plaster warm smiles on their faces the moment the bulletin started, we bet not too many people buy it.

How damn silly! We, as audience need presenters to convey a scene to our mind’s eye, not to be the eye candy. To that end, the top criterion should be how they sound, not how they look.

Time would be better spent checking their pronunciations (especially foreign names) rather than eyeing off a colleague’s outfit. It would be highly unlikely men would have a hissy fit if they were both wearing a grey suit or a similar colour tie.

Call me sexist but you know it’s true.

Sexist but you know it’s true.

Did this really happen? My brain began to hurt half way through the article.
Pleeeeeezzzz somebody tell me this is not true.