Good morning, early birds. Centrelink problems are not over, Australia's offshore detention criticised yet again, and the Japanese PM is in town. It's the news you need to know, by Sally Whyte and Max Chalmers.

A leaked memo shows front-line Centrelink staff have been told not to process disputes over debts generated by the government’s new automated data-matching system. Obtained by the ABC, the memo says staff “must not process activities in relation to the Online Compliance Intervention”. The memo comes despite claims by Human Services Minister Alan Tudge that people who have received notices can see someone in a Centrelink office “in 10 minutes”. The Guardian is also reporting internal documents show the system is sending letters to old addresses and its earnings calculations are “wildly wrong”.

Australia’s offshore detention system has been described as “draconian” by Human Rights Watch’s annual report card, to be released today. The report calls for the Manus Island detention centre in Papua New Guinea to be closed, and said neither Australia or PNG had taken steps to do so, despite a court ruling in PNG.

VIDEO OF AUSTRALIAN HOSTAGE IN AFGHANISTAN

A video has emerged of an Australian teacher taken hostage by the Taliban in Afghanistan, showing Timothy Weeks pleading with the US government for a prisoner swap in order to save his life and that of his American colleague Kevin King. The video, which has not been verified, shows Weeks and King, who were captured near their workplace, the American University in Kabul, in August.

After four trials spanning three years, Sydney man Robert Xie has been found guilty of murdering five members of his family seven years ago. “The victims included Xie’s brother in-law, newsagent Min Lin, Min Lin’s wife Lily Lin, and Lily Lin’s sister Irene Lin. Min and Lily Lin’s sons Henry, 12, and Terry, 9, were also killed,” writes the ABC. The Sydney Morning Herald detailed the evidence presented against Xie, including that “a small ‘transfer’ stain found in Xie’s garage was allegedly a mixture of blood of at least four victims”. Xie continues to maintain his innocence, telling the jury “I am innocent” moments before the 11-1 verdict was announced. Deliberations took eight days. “The trial was Xie’s fourth, with the first aborted after undisclosed new evidence came to light, the second cut short when the judge became ill, and the third — the longest trial in NSW history involving a single accused — resulting in a hung jury, leading to a six-month retrial that began in late June last year,” reports The Australian.

QUOTE OF THE DAY

“What other section of our youth is required to endure such an ordeal to attain the corporeal manifestation of their identity? What purpose is there in making them and their loved ones do so, particularly at such a fraught time of their lives?” — Family Court judge Peter Tree, who told Caroline Overington it’s “inhumane” to require Australian children experiencing gender dysphoria to get the court’s permission to receive hormonal treatment.

Sydney: Japanese Prime Minister Shinzo Abe is in Australia to meet with Australian PM Malcolm Turnbull, and the Trans Pacific Partnership is on the agenda, which will focus on business.

Perth: Today marks the final day of the 21-day stay of a bankruptcy ruling for Rod Culleton. The Parliament House website has already put him in the “former” pile, but yesterday a judge granted a one-week extension on the stay. As always Culleton is positive, telling reporters yesterday: “I’ve still got my senator’s badge on and I’m going to my senator’s office.”

London: The second trial of entertainer Rolf Harris continues. A London court has heard allegations that Harris dragged a 14-year-old girl “onto his knee” at a music festival in 1971.

Mooloolaba: One Nation’s Pauline Hanson says she will make a “game-changing” announcement on the Queensland election.

Brisbane: First cricket One Day International against Pakistan today at the Gabba. The Australian team is here.

Thanks to Sussan Ley, it’s no wonder so many Australians feel they’re being played for mugs — Nick Xenophon (The Advertiser $): “Next month, I will reintroduce the Bill and my warning to colleagues is: ignore it at your peril. This latest entitlements scandal is as corrosive to trust in our elected representatives as an acid bath. It’s time we drained it.”

Life outside the bubble — vote for more grey heads Terry Barnes (Herald Sun $): “Americans have minimum age requirements for election to Congress and the presidency, ensuring candidates have lived a little before taking high elected office. Maybe we should consider doing the same in Australia.”

Debate: should we be fighting for a universal basic income in Australia? — Troy Henderson and Gigi Foster (Guardian Australia): “The massive cost of a UBI is not its only problem. UBIs are also inefficient: not only those who need the money, but also those who do not, are paid. And depending on the dollar figure, people presently receiving social support might see a reduction in their incomes.”

NSW has its own problem with politician entitlements — Sean Nicholls (Sydney Morning Herald): “Cleaning up election funding in NSW was a keystone promise, yet the government’s response to the recommendations of a parliamentary committee that has been considering changes advised by Kerry Schott‘s panel leaves a lot to be desired.”

President-elect Donald Trump’s pick for Secretary of State has told a Senate confirmation hearing the US must not let China access the islands it has developed in the South China Sea. Former Exxon Mobil head Rex Tillerson compared China’s construction of military instalments on the reefs and atolls to Russia’s annexation of Crimea. He did not elaborate on how the US could prevent China continuing to access the islands, which have been used to bolster territorial claims in the disputed waters. — Reuters

Russia has responded angrily to the deployment of 3000 US troops to Poland. A Polish defence official said the move was necessary given Russian exercises across the border, but a spokesperson for Vladimir Putin described it as a threat to Russian security. — BBC

The human rights situation in Hong Kong is the worst it has been since the territory was handed from Britain to China in 1997, according to a new report by Amnesty International. After the handover, Hong Kong retained some freedoms not afforded on the Chinese mainland, but recent attacks on civil society and the independence of the local judiciary have provoked anger and protest. Last year, five vendors offering books critical of the Chinese Communist Party disappeared, only to resurface in Chinese police custody. — The Guardian

Hardline President of the Philippines Rodrigo Duterte has signed an executive order directing government agencies to distribute contraception to 6 million Filipino women, as well as reproductive health information. The policy is controversial in the very Catholic country, and the Church is likely to push back. Compared to neighbouring countries, the Philippines has a high birthrate. — The Washington Post

Aboriginal Australians co-existed with the megafauna for at least 17,000 years (The Conversation): “This single fossil has changed the nature of the megafauna extinction debate. We can now abandon the rapid/over kill hypothesis and start to untangle how climate may have played a role, or how changes in Aboriginal population numbers may have impacted on the ecology of the megafauna?”

‘This evil is all around us’: Trump’s pick for the CIA, Mike Pompeo, sees foreign policy as a vehicle for holy war (Slate): “If a normal Republican president had nominated a figure like this to head the country’s major foreign intelligence agency, there likely would have been a lot of attention paid to his apocalyptic religiosity and Manichaean worldview. Amid the fire hose of lunacy that is the Trump transition, however, Pompeo’s extremism has been overlooked.”

San Escobar: How Poland’s foreign minister helped create a fake country (The Washington Post): “There is no country called San Escobar. And on social media, Waszczykowski’s flub was soon mocked. Many users suggested that he was thinking of Pablo Escobar, the late Colombian drug lord and subject of the Netflix show ‘Narcos.’” 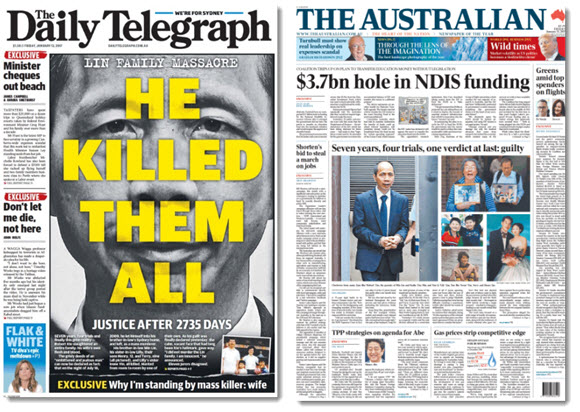