Video of the day: no Sam Kekovich in new Australia Day ad, but it causes a stir

Last year, BuzzFeed was leaked a copy of the script, and reported that Aboriginal actors had distanced themselves from the production.

The latest Australia Day ad from Meat & Livestock Australia (MLA) doesn’t mention Australia Day (AKA “Invasion Day”), and revolves around a barbecue hosted by a trio of indigenous Australians, which is promptly gatecrashed by the friendly occupants of boats arriving from across the world.

Last year, BuzzFeed was leaked a copy of the script, and reported that Aboriginal actors had distanced themselves from the production as it trivialised the violence in the British settlement of Australia. The final ad appears tweaked but not greatly changed from the script leaked to BuzzFeed. It’s been lauded by Mumbrella, where Alex Hayes wrote that MLA have “opened up a conversation. And while you may ‘never lamb alone’, by doing this the MLA has shown it stands alone among Aussie marketers right now.” The Australian appears less than impressed with the decision not to cite Australia Day: “Strewth, that’s un-Australian!” 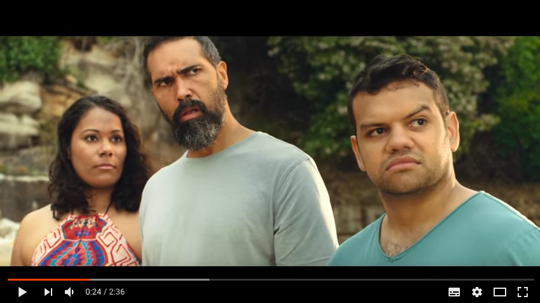 Yeah, it’s a whitewash (sorry) but it’s good communication. and it begins the process of acceptance. I hope.

I must be getting old, grumpy and politically correct. But I found this video
distinctly uncomfortable to watch.

I recall an excoriating one-off on SBS in the mid 90s, called ‘BARBARKUE AREA’ .
Never rebroadcast – could be a good one for NTV.

We loved this ad, great message. I heard a TAC representative speak well of it yesterday afternoon on ABC radio.