The ABC has not, so far, issued a retraction.

In a press release sent last night to only ABC journalists, Culleton’s chief of staff and policy adviser Margaret Menzel said that the claims that Culleton had been made bankrupt and wasn’t still a senator were “grossly defamatory and completely inaccurate”.

The ABC has not, so far, issued a retraction. Unusually, Crikey understands Culleton has actually not issued the ABC with a formal legal threat, but merely signalled his disapproval through the press release. It is thus not clear who Culleton’s legal advisers are — he has been closely advised by Peter Gargan, who believes Australian courts are no longer constitutional as they do not issue writs in the name of the Queen, and who seems proud to be considered a vexatious litigant in four jurisdictions.

On the Senate website Culleton is listed as a “former Senator”. 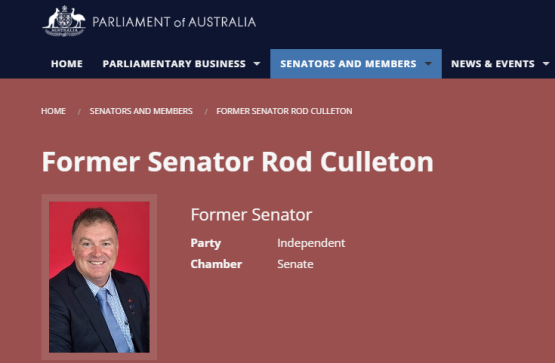 On December 23, a Federal Court ruled Culleton was an “undischarged bankrupt” — which Senate President Stephen Parry relied on when he wrote to the Western Australian Governor saying Culleton had been disqualified as a senator.

But Culleton is hanging on, fighting the ruling both in court and in the media.

Yesterday, Culleton sent another press release to all the gallery (released publicly on Facebook), in which he said he had received “sound legal advice” that said Parry’s claim that Culleton was bankrupt was “premature and should be withdrawn immediately”. Culleton also said he was solvent and had filed proof of this to the court. He has filed a notice of appeal in the Federal Court over the bankruptcy ruling. Culleton argues that as there was a 21-day stay over the ruling anyway, he is not, at this point in time, strictly speaking, a bankrupt (the 21-day stay ends on Friday).

Numerous other media outlets have also written about Culleton’s bankruptcy, and yesterday, Parry’s letter saying a vacancy existed in the Senate was widely covered by most media outlets. It appears Culleton’s office has only issued the press release demanding a retraction to the ABC.

In One Nation’s previous incarnation the party imploded in Qld due partly to the preselection of a number complete nitwits. This is one area where Pauline has not learned much. A quick look at Culleton’s antics, as well as those of Roberts, would have had any leader of commonsense running a mile. Alas when you vote based on spleen and frustration…..

LAtest is he might never have been a senator, so, yes, inaccurate.

The fact that Culleton’s chief of staff sent a demand for retraction only to the ABC is indicitive of many current politicians targeting the national broadcaster.

Or perhaps the ABC is the only media outlet regarded as credible therefore Culleton didn’t care what others reported.

We should be grateful that PHON continues to have space cadets & self immolators. Given the size of the vote going begging, just be thankful that some smarter folk don’t show an interest.

If we exclude Cory Bernadi and George Christiansen from the ranks of the smarter people this is true.

A breakaway Conservative party with better political nous and organisational ability would hoover up this vote in short order. And sit to the right of the current LNP and although being the junior partner in any coalition would be the tail that wagged the right wing dog. As well as getting Cory back and George into the ministry.

Am I reading this right.
The order clearly indicates that the act of bankruptcy dates from the 30 Aug 16. To me this means Mr Culleton was ineligible to sit as a Senator from this date. If he did so that raises some interesting constitutional questions.

The 21 day stay is not on the bankruptcy order, merely on proceedings under the sequestration order subsequent to the bankruptcy. The sequestration order is the act of placing his assets into the care of a trustee to administer his estate as a bankrupt, not his actual bankruptcy. He is already bankrupt and has been since the start of September.
Is this the logic Parry has used to declare his position vacant?