Good morning, early birds. Today is all about Donald Trump, but there are also gas prices, a heatwave and (yes even more) MP expenses in Australia. It's the news you need to know, by Sally Whyte and Max Chalmers. 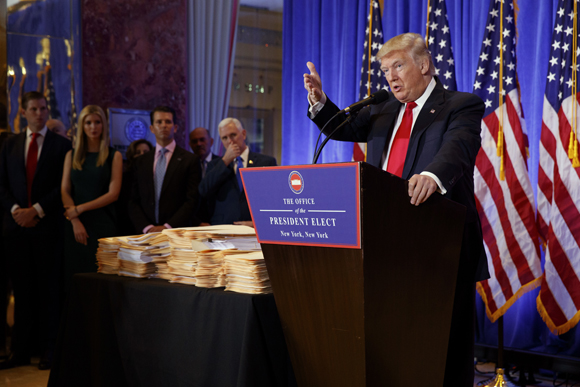 President-elect Donald Trump has given his first press conference in almost six months and:

We’re not done with raking over politicians’ expenses, with The Australian publishing figures showing Labor leader Bill Shorten charged taxpayers three times as much as PM Malcolm Turnbull for family flight expenses in the six months before the election. As the Oz does point out (albeit right at the end), Shorten’s three children are much younger than those of former PMs and opposition leaders during election campaigns.

Crikey‘s Josh Taylor and Myriam Robin have also done the maths — it cost the Australian taxpayer more than $2 million to fly MPs around the country during the election campaign caretaker period — and that’s completely within the rules, although some MPs claimed more than others. While Sussan Ley has a reprieve from the harsh spotlight for now, her colleagues are briefing the media that it is unlikely she will return to her job as health minister. “Her position is completely untenable. Most people [in the Coalition] agree she has gone way over the line on so many occasions — it’s indefensible,” an MP told Fairfax.

Both The Australian and the Australian Financial Review‘s front pages carry stories declaring a shortage of available gas, which is set to stymie manufacturing and lead to job losses, as the federal government and industry try to put pressure on state governments. Environment and Resources Minister Josh Frydenberg told the Oz : “Sensitive as we should be to the needs of landowners and the environment, we can unlock our gas reserves in a sustainable way by lifting the state moratoriums and bans currently in place,” in a call to end moratoriums and restrictions on gas developments. The headline in the AFR is “Victoria ‘to blame for price rise'”, with Shell Australia chairman Andrew Smith saying the Andrews government’s ban on onshore gas production is leading to higher prices, which will cost Victorian manufacturing jobs.

Bellamy’s Australia has reacted to its plunging share price by parting ways with CEO Laura McBain, but shareholders of the organic baby formula and food company are looking to spill the positions of four of the six board members. Bellamy’s went into a trading halt in December after struggling in tough trading conditions in China, but returned to trading on the ASX yesterday, with shares closing at $5.35, a drop of 20% after they tumbled as much as 40% during the day. Tasmanian entrepreneur Jan Cameron is one of four major shareholders controlling 35% of Bellamy’s shares who want two-thirds of the board gone as well, telling the Oz the company needs an extraordinary general meeting. “They have made Laura (McBain) a scapegoat; they hung on to her long enough (through the ASX trading suspension) to get the Fonterra contract renegotiated because no one else was capable of doing that, and then (they jettisoned) her.”

Many Australians will be hiding from the sun today, with temperatures to soar above 40 degrees in parts of Queensland and New South Wales. A 1000km stretch of the country will be affected by high temperatures for a few days. Authorities are warning people to stay out of the sun, to avoid exercise or activity in the hottest part of the day and to stay hydrated.

“It’s no secret we’re not ready to form government. We’re building something, we’re probably not even ready to form a coalition yet. But we certainly are ready to be the ones with the balance of power.” — Western Australian One Nation leader Colin Tincknell. Full interview in the Australian Financial Review

Time to revisit politicians’ pensions — James Campbell (Herald Sun $): “Abolishing the defined pension for MPs has been a disaster. The beauty of the pension was that it was a trade-off. By entering parliament the best and brightest forgo the money they could make elsewhere and in return we look after them for the rest of their lives.”

Why axing Abbott was a big mistake — Rowan Dean (The Daily Telegraph $): “The reason some Liberals and journalists insist that Tony Abbott can’t come back is not because they think he’d be no good, but because they can’t bear to admit they were wrong.”

States must unlock gas reserves to help lower prices — Josh Frydenberg (The Australian $): “The answer must be for the states to adopt a more sensible and nuanced approach by assessing the environmental and economic merits of each particular gas exploration proposal rather than pursuing blanket statewide moratoriums and bans.”

“The torture in my country is transparent, in Australia it is not obvious” — Imran Mohammad (Sydney Morning Herald): “I am trapped in Australia’s camp on Manus Island but I have remained the master of my soul. While I don’t have control over my life, I have never relinquished control over my mind”

Australia’s unscrupulous pursuit of East Timor’s oil needs to stop — Tom Clarke (Sydney Morning Herald): “This issue is not about charity, it’s about justice. East Timor is simply asking for what it is legally entitled to – no more and no less.”

Barack Obama has delivered the customary presidential farewell address, speaking to an audience of around 18,000 in Chicago. The outgoing leader encouraged Americans to get outside their bubbles, stop arguing with strangers on the internet, and stay engaged in politics, while shedding a tear as he thanked First Lady Michelle Obama. He also warned of the coming displacement of middle-class jobs as a result of automation and called for unionisation, a focus on education, and an updating of the social security net in response. — Chicago Tribune

A Chinese aircraft carrier has passed through the Taiwan Strait, provoking the Taiwanese government to dispatch F-16 fighter jets. Taiwanese officials are encouraging people to remain calm, though the incident is further evidence of rising tensions in the region. Taiwan’s President Tsai Ing-wen, who controversially called President-elect Donald Trump to congratulate him on his election victory, is currently on an international tour that includes US stopovers. — Al Jazeera

Palestinian militant group Hamas has been gathering information on Israeli soldiers by having operatives pose as women and then strike up conversations online. According to an Israeli army spokesperson, the fake profiles then try to convince soldiers to download applications that could help Hamas gather intel on Israeli army movements, operations and armaments in the Gaza Strip. — Reuters

Clare Hollingworth, Reporter Who Broke News of World War II, Dies at 105 (New York Times) “In 1989, though nearly 80 and nominally retired, Ms. Hollingworth, attired in a safari suit, her working uniform of choice for 60 years, was spotted in Tiananmen Square shinnying up a lamppost for a bird’s-eye view of the government’s violent crackdown against civilian protesters.”

These Reports Allege Trump Has Deep Ties To Russia (BuzzFeed): “The dossier, which is a collection of memos written over a period of months, includes specific, unverified, and potentially unverifiable allegations of contact between Trump aides and Russian operatives, and graphic claims of sexual acts documented by the Russians” 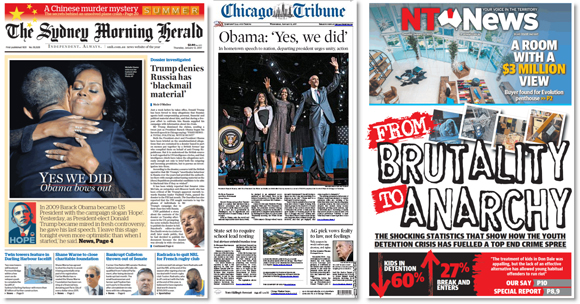