Cultural turnover. Veteran Sydney Morning Herald literary editor Susan Wyndham is bowing out of the paper at the end of the month, after three and a half decades with Fairfax. She is an important and well-respected figure in Sydney’s literary scene, and her pending departure has left many publishers bereft. Of particular lament has been the news that Wyndham is not being replaced by another Sydney-based editor, but that her counterpart at The Age, Jason Steger, is to now run the books pages of both titles. Steger is seen as very Melbourne-centric in focus, and unlike Wyndham, isn’t a regular on the Sydney literary events circuit and lacks Wyndham’s warm relationships with Sydney publishing houses. Sydney’s literary scene is up in arms about the change, according to Ms Tips’ literary sources. Mind you, the Melbourne-based Ms Tips can see the irony of it all. Writers and readers of The Age have long known what it’s like to be subsumed by the suits and scribes in Sydney.

Slipper nips MPs. Human Services Minister Alan Tudge was asked repeatedly this morning on RN Breakfast why those who were overpaid by Centrelink should face the prospect of going to jail while MPs were given the chance to step down from their jobs while an investigation went on (if that). He struggled to answer the questions, but guess who does have an opinion about the difference in treatment? Former speaker Peter Slipper, who is familiar with spurious uses of travel expenses, has weighed in on the debate about what MPs should claim and what the consequences should be for getting it wrong. Slipper was convicted of three dishonesty charges that were later appealed and set aside over the use of his Cabcharge allowance in 2010. He believes all MPs should be subject to the process he was, tweeting “every MP and Senator should b(sic) subjected to the same forensic examination of expenses as I was. I bet the results would b(sic) interesting” and “I was prosecuted at great expense but found not guilty. Allegations against others should get same treatment. Let them face courts too”. Not likely though, is it? 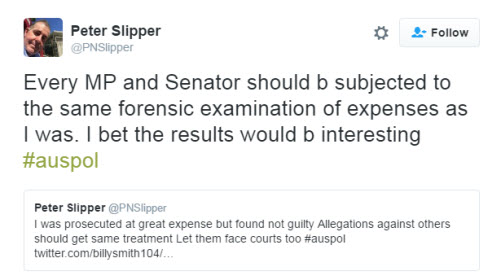 Just being thorough. Perhaps with a sense of prescience, Labor’s Anthony Albanese declared a small gift on his interests disclosure just before Christmas — a caravan-ing and camping edition of Monopoly, developed by the Caravan Industry Association of Australia. Should a Gold Coast apartment sit on the Mayfair position? 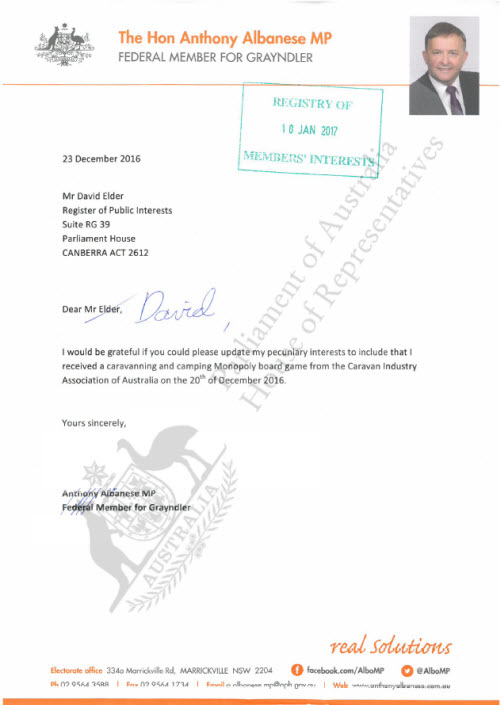 Holiday beard watch. Unfortunately it seems that our reporting of holiday beards has become more of an obituary column rather than a running commentary on beards that may live to see another (parliamentary sitting) day. Queensland Labor MP Graham Perrett tweeted this transformation as he prepared to appear on Sky News’ Perrett Report (it’s Janine’s show, not Graham’s), showing that the growth on his face was discarded before he fronted up to the cameras. Reality is really setting in when the holiday beards are gone. 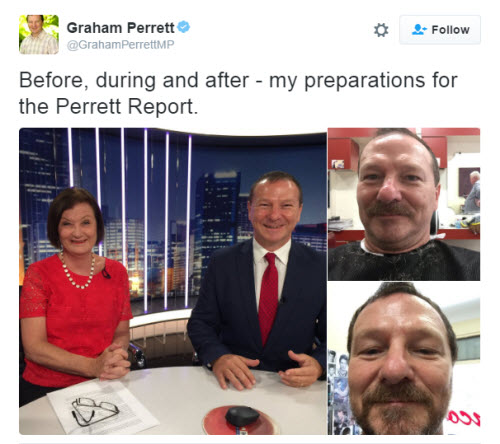 Let’s face it, Slipper does have a point. Why was he singled out to be treated as he was (for a piddling amount compared to others on the fiddle at the same time, in the same party) and no one else?

Nice. Between them Susan Wyndham and her husband, the odious Paul Sheehan, must have cleaned out the long suffering Fairfax shareholder of close to a million in get-lost money. Well played.

If Centrelink carry through with prosecutions which result in gaol sentences it will cost taxpayers a helluva lot more to incarcerate the claimants than it would to simply continue the payments or let the matter rest. Prisoners are very expensive to maintain.

Truly stupid economics which it would be no surprise to see this government condone.

But think of the “tough on leaners*” visuals (they’ve worked in the past) – I’m sure this government is.