Delta Goodrem is ‘having a baby!’ (or how to get away with blatantly fictitious ‘news’)

Delta Goodrem is having a baby, according to New Idea. Which is a very creative interpretation of the phrase "not right now". 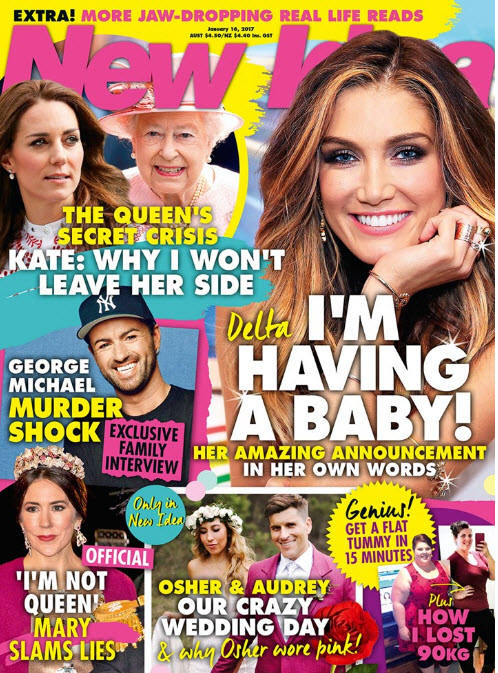 Delta Goodrem is having a baby. It’s there, in black and white (and yellow) on the cover of the latest New Idea. Inside the mag, the headline on page 12 reads “Delta Goodrem: I am going to be a mum.”

The story itself is no exclusive. It relied on a December 18 interview in News Corp’s Stellar insert, which itself made the front page of the Sunday Tele, in which Goodrem said, to quote New Idea, “I look forward to that time [when I can become a mum]”. The full quote in Stellar continues with “… but it’s not right now”.

In other words, a New Idea writer saw the quote mention the possibility of motherhood, picked it up, and then snipped out the bit that made it clear Goodrem wasn’t having a baby now. If a gossip rag doesn’t have a good front-page story, it can just make one up.

While News Corp entertainment writer Nick Bond quickly called out the sleight of hand on Twitter, that didn’t stop it being repeated on radio, with KIIS 101.1 not going to the original source for the Goodrem’s full quote.

Of course, it’s far from the first time baby rumours have been attached to the former Neighbours star-turned-pop diva. Like American actress Jennifer Aniston, about whom false pregnancy rumours have moved millions of copies of gossip rags over decades, Goodrem’s womb has proven to be utterly fascinating to Australia’s gossip rags.

In 2014, Goodrem told Woman’s Day she was looking forward to motherhood because she loved kids. The headline: “Delta’s baby shock”. That headline was used in New Idea late last year too (are babies always “shocking”?), after Goodrem posted an Instagram photo of her nephew. Last year, TV Week led an interview with Goodrem with similar positive sentiments on motherhood, even though the songstress’ comments were somewhat non-committal (“If it’s meant to be, then one day it will.”)

New Idea’s circulation slipped 15.3% in the November audit, but the rag still sold an impressive 211,855 copies. Of course, that’ll be the last circulation figure we’ll ever get for New Idea — owner Pacific Magazines pulled out of the circulation audit just before Christmas. — Myriam Robin

Delta probably enjoys winding up the media. And why not?

Ah, memories of “The Truth” and headlines like “Sigley knife scare” – i.e. Ernie cut himself while eatting a steak. 🙂

But really Crikey, we didn’t need this non-story. Nobody on this website gives a rats about New Idea.

Does defamation law not apply to this kind of toilet paper? I also don’t understand why it’s legal to stalk and then photograph people without their consent (incl. upskirting and the like) and for those photos to be published for profit. I’m a huge supporter of civil liberties and the freedom of the press, but is allowing New Idea and its ilk to exist really such a necessary evil?

It’s close to fiction, apart from some of it that’s closer to advertising. Advertorials. Do we need to ban products that are (loosely) based on reality? I’m pushing the anti-censorship line here.

As much as I loathe them and think they contribute nothing to society, I wouldn’t for a moment suggest banning these magazines. My argument is that some of their current practices are clearly unethical and should be regulated out of existence. If they can still survive by pushing their fanfic without stalker photos and blatant defamation, then they can go their way with my blessing.