Centrelink’s double standards. As the headlines about the Centrelink debt recovery program show no sign of abatement, it is interesting to look at previous information the Department of Human Services gave to Senate estimates last year. The department’s own documents show that just 9.64% of all Centrelink recipients received an overpayment between July and December 2016.

This chart shows the percentage of people on particular payments who were identified as receiving overpayments in the last six months of 2015. 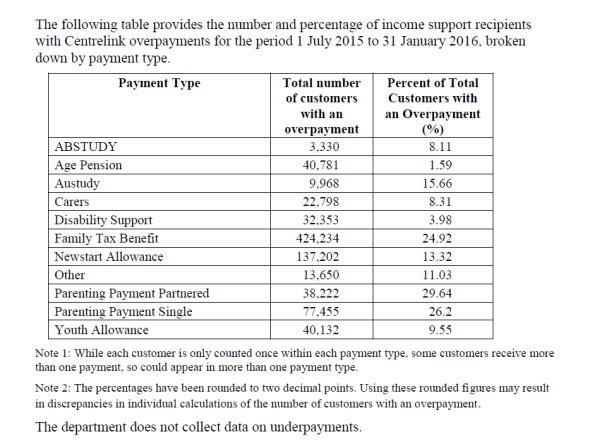 It also said there was no grace period for people to repay overpayments, even if the department is responsible for the overpayment.

When asked by Greens Senator Rachel Siewert if the debt recovery would be focusing only on those “with a capacity to pay”, or on unemployed and low-income earners, the tone-deaf answer implied that those still receiving benefits would not be negatively impacted by any of their meagre payments being withheld:

“The measure targets those people, with debts, no longer in receipt of a Centrelink payment and who have the financial capacity to repay the debt. People reliant on the social welfare system will not be negatively impacted by this proposal as they already repay their debts through agreed withholdings from their social welfare payments.”

Holiday beard watch. Yesterday we noted that Education Minister Simon Birmingham was one of the pollies to put away the razor while on leave, growing a holiday beard (or as one commenter called it, a “just been forced out of hiding” beard). But Birmo isn’t the only one. Labor’s Andrew Leigh posted this slightly disturbing photo of his half-shaved effort with the comment “Can’t decide — shall I keep the holiday beard?”. At that stage it looks like the decision has already been made. 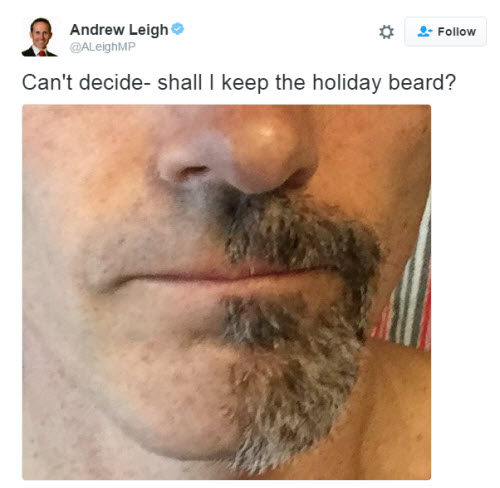 Leigh’s Labor colleague Mark Butler has also grown a holiday beard, but now the question is how many will make it back to Canberra when Parliament sits in February? 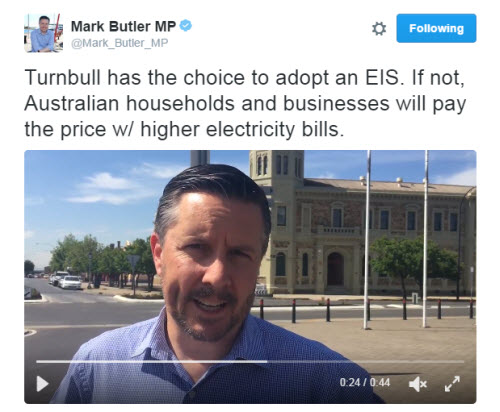 How Tony Abbott spent his holidays. While some MPs are spending their holidays on the beach or catching up with family, former prime minister Tony Abbott has been writing. He has also been writing a diary entry for the Spectator‘s Australian edition of his time in Jerusalem (yes, the one where he called for Australia to move its embassy there) and a book review for the Wall Street Journal. Abbott takes a mostly measured look at The End of the Asian Century: War, Stagnation, and the Risks to the World’s Most Dynamic Region by Michael R. Auslin, which takes a less than optimistic view of prospects in Asia. Abbott ends the review with this statement on Australia’s position in Asia:

“As for my own country, America is Australia’s indispensable security partner. Australia has more and more common interests with China but—at least so far—few common values. More trade, more investment, more tourism and more two-way education and work exchanges with China has always been my country’s approach. As I hope Mr. Trump might note, there’s much to be said for it: It doesn’t guarantee peace but it is certainly the best way to avoid disaster.”

In 2016 Abbott took a leaf from the Kevin Rudd book — How to become Prime Minister again after it was unfairly taken away from me — with well-timed comments to the Australian media on government policy matters, perhaps now he will focus on writing. He does have a book on the way with Melbourne University Press, as it is …

MUP a family business. Speaking of MUP, Louise Adler’s publishing house will add another Shorten to its stable this year, with Chloe Shorten, wife of Labor leader Bill Shorten, to write a book on blended families. Take Heart will cover the lessons and of finding a new normal in a family with a step-parent, covering her own experience. It’s advertised to appeal to the growing number of “non-nuclear families”:

“The first person in her family to divorce, Chloe was surprised by the lingering stigma and unexpected tripwires for families not fitting the traditional cookie-cutter model. She was also heartened by the sensible advice she unearthed, the resilience of her children and the joy of a watching a new step-parent.”

Bill Shorten’s For the Common Good was published by MUP last year.

Reality sets in for holiday-bearded MPs

Holiday beard watch: how many have you spotted?

Those figures? Is it possible, this government simply wants a tumbril load of whipping boys as a spectacle – to distract us from it’s other problems?