Hard-done-by government outcast Bronwyn Bishop offers some words of wisdom to a fellow pariah, as told to satirist Ben Pobjie.

I thought I would drop you a line, just to offer you my support during this most trying time, and to reassure you. Right now I am sure you will be beset on all sides by disreputable types — most of them probably unemployed or in the service industry — trying to convince you that you are not a good person. Sussan, I want to assure you that you are a good person, and I speak from experience, because I, too, am a good person, and I, too, have been subject to scurrilous attacks on my integrity by people who wouldn’t know ethical consistency if it leapt out of their lentils and shampooed them.

I want you to stay strong, Sussan (did you know there’s a shop named after you? I bought a blouse there once and I was terribly satisfied with it). It’s very important, for all of us who believe in free enterprise and individual responsibility and God and other things of this nature, that you do not, as the saying goes, let the bastards turn you upside down. We of the Liberal Party — the party, let us remember, that Robert Menzies founded as a bulwark against tyranny and social media — have been fighting for too long to drop our arms and let the socialists win now just because the bastard children of Mao Tse Tung and Jane Fonda have suddenly decided that it’s a crime to make savvy decisions in property investment.

I want you to remember, Sussan, when you are considering your options — and I know it can be very tempting to give up at times like these, to simply throw your hands in the air and decide you might as well accept several lucrative directorships and a high-paying media job — that the battle against socialism has been at the heart of this country’s political landscape since the day Captain Cook planted his flag upon these fertile shores and declared that Russians were not welcome. You need to remember that, because some people will try to convince you that socialism is no threat. Some people will try to convince you that the fear of socialism is the sign of a diseased mind. Some will do all they can to persuade you that to link your current difficulties regarding expense claims to a lurking socialist conspiracy is so deranged as to strongly indicate the need for urgent medical attention. I know this because they have tried to do the same to me. Just the other day I was on television (I work in television these days, Sussan — do let me know if you would like introductions to any famous celebrities as I know quite a few of them), and a woman — I forget her name but I am fairly sure she was wearing the Order of Lenin on her belt — actually asked me, “what’s this got to do with socialism?”

Imagine that, Sussan! Actually questioning whether the controversy surrounding you was related to socialism! I almost felt stupid elaborating, the connection is so obvious. I’m sure to most thinking people it was quite painful to have to have it spelled out in this way. But, of course, it has everything to do with socialism, Sussan. As I have said before, and I will say again, and I will say again for a second time, socialists blame everyone but themselves, and this is exactly what they have done in this case. Here the socialists insist on blaming you for abusing your parliamentary entitlements, and utterly refuse to blame themselves. Had they any integrity at all they would stand up and admit that, in fact, it was they who abused your parliamentary entitlements, and they would accept the appropriate punishment thereof.

But they lack the courage, and so they would prefer to lay the blame on the blameless and stylish shoulders of women like you and me, who are to be crucified upon the pyre of socialism like common Vikings. Any fair and proper investigation into your expenses will find that socialists were to blame, but Sussan I warn you: you cannot necessarily expect a fair and proper investigation. I have experienced the mendacity of these people myself: once I took a helicopter ride in order to save the nation’s road system wear and tear, and I ended up being worn and torn; torn from the bosom of my office, and worn as a grotesque trophy upon the heads of my enemies.

I don’t want this to happen to you, Sussan, because there are far too few honest, decent, hard-working, property-owning women in politics currently. And we have to stick together: the worst thing in the world is when a woman attacks another woman, like that bitch Penny Wong. I prefer to stand in solidarity with you, my sister, who, although I do not know all the details of what you did or where you went or what you bought or what you claimed or when anything happened or what your job is or where, in a strictly geographical sense, I am right now, I am absolutely certain that you are guilty of nothing more than free enterprise. And the day free enterprise is dead in this country is the day we sign over the whole damn place to the Stalinist femitrots at SBS.

Stay strong, Sussan. Stand proud, and stand firm. Let the inquiries run their course, and then get back to doing the sterling work you do, whatever that might be. I know you are being attacked by the Twitterati, but the Twitterati is just like a pack of wild dogs: it will always work to separate the young and the sick from the herd, and it would be a shame if you were to let yourself be either young or sick. These alcoholic socialist wild dogs want to destroy the country by making us all ashamed of our expensive apartments, but if we remain steadfast in our love of freedom and principled determination to never pay for anything if we can help it, we can euthanase those wild alcoholics, and we can spit on socialism’s grave together.

*As told to Ben Pobjie 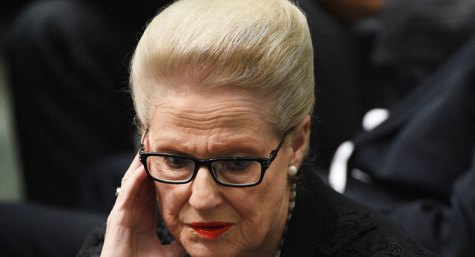 Oh dear me. If only Bronnie could actually write as well as Ben P. 🙂

Highly unlikely Bishop would purchase a blouse at Sussan, it’s where the workers shop.

Off the rack? …. the clothes, not the peasants.

As a socialist, I take full responsibility for everything. If I hadn’t gone about life getting along, and instead rode my motorbike around the country, and then seeing the poor and benighted, start a revolution, then none of this would have happened.