Trumpocalypse Down Under is closer than you think

It is not difficult to imagine a far-right coalition emerging that includes figures from both inside and outside Parliament.

The Trumpocalypse unleashed in the United States has added urgency to the question of whether Australia’s so-called patriots movement represents (as they claim) the silent majority or the noisy (if disturbing) minority. The rally held by the True Blue Crew and the United Patriots Front to celebrate Trump’s victory outside Victoria’s State Parliament a few days after the election was reassuringly small, with the 40 or so patriots heavily outnumbered by police and anti-racism protesters.

Pauline Hanson has made a encouragingly fast transition from her victorious announcement of “I’m back — and I’m not alone” to last weekend’s declaration that one of the senators to have entered Parliament alongside her was nothing more than “a pain in my backside”. This spectacle allows at least some of her opponents to believe that One Nation and the far right in general is a problem that will ultimately solve itself, best left alone to descend into acrimony and self-destruction. However, such complacency is a serious error of judgement.

[Anti-Muslim rally reveals a racism both shocking and commonplace]

The return of One Nation cannot be regarded in isolation. It occurs in tandem not only with international events such as Brexit and Trump but also with the rightward shift of Australia’s mainstream political parties on the one hand and with the heightened visibility of fringe hate groups on the other. Hanson has already managed to forge links with figures from both the centre (or what remains of it) and the periphery.

It is not difficult to imagine a far-right coalition emerging that includes figures from both inside and outside Parliament, ranging from Hanson herself to George Christensen to Mark Latham to Dick Smith to Kirralie Smith (the creator of the “halal choices” website) to Andrew Bolt to Gina Rinehart to cartoonist Larry Pickering — not to mention so-called “lone wolves” such as Phillip Galea, Thomas Mair, and Anders Brevik who are prepared to resort to violence.

It is not necessary for any single element of this loose coalition to attract an election-winning level of support, or for them to maintain a harmonious working relationship among themselves. Those may be the prerequisites for governance, but they are superfluous when the primary motive is to create radical social and political disruption. And reports that Trump fans Bernardi and Christensen are on the brink of leaving the Coalition are just the latest indication that the far right is already well on its way to achieving that disruption.

Nor should we assume that Australia may not end up under the authority of a far-right government in some form. After all, this would not require much of a shift in our political discourse, however out-of-sync this may be with Australia’s self-image as a haven of multicultural tolerance. When attending rallies held by right-wing organisations such as Reclaim Australia, the Q Society and the United Patriots Front over the past few years, I’ve been struck by how little distance there is between the political statements made from their podiums and those made in an average week in Parliament. Only the nakedness of the hate speech and the extravagance of the theatrics differentiates the so-called far right from the mainstream. Whether the far right manages to capture the mainstream, as Trump captured the Republican Party, or the mainstream absorbs the far right, the outcome will be much the same.

The small band of patriots who turned up at the Trump victory rally in Melbourne were in heavily self-righteous mode, claiming that his victory was also a win for “the little people like us” in Australia. Three primary school-aged girls held up banners reading “Great Fathers Make Great Daughters — Ivanka Trump For President 2024”, “Trump Trumped The Leftist Bigots”, and “Adorable Deplorables”. (Well done, HRC, for providing the alt-right with such a useful badge of honour.) 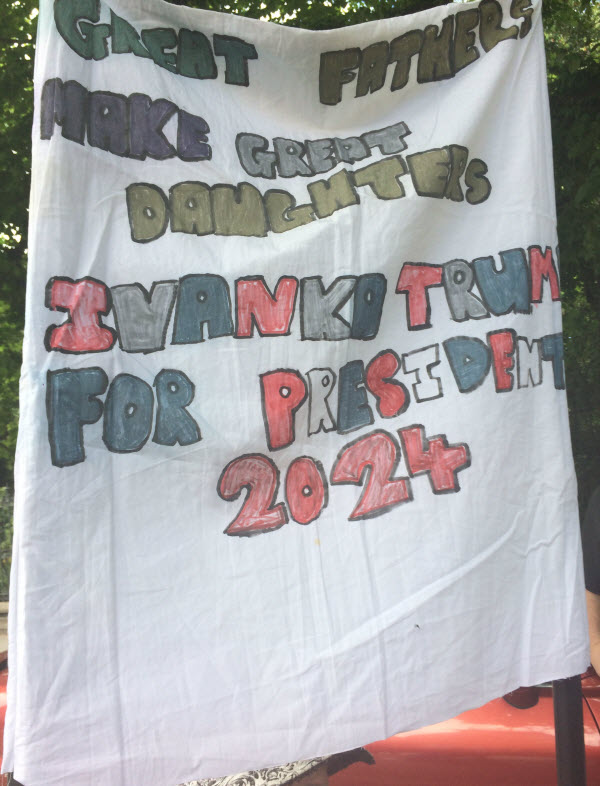 The little girls were (of course) adorable, even as they clutched their deplorable banner. I wondered whether they were home-schooled, thinking that their opinions — or rather their parents’ opinions — would surely make them misfits at almost any Australian school. But no, they said that they went to a mainstream school in Melbourne. At the time, I felt sorry for them. They seemed like unhappy figures as they stood alongside their fellow deplorables listening to rants about Safe Schools and “rapeugees” and halal certification smuggling Islam into our food.

But now I wonder what possible basis I had for regarding those children as outsiders in today’s Australia. Unless they break free of their parents’ narrow-minded worldview, their opinions will win the disapproval of some (but not all) of their teachers, they will miss out on the friendship of people unlike themselves (not to mention some delicious halal certified food). They will — in my opinion — lead less fulfilling lives as a result.

But there is no reason to think that they will be lonely in the strange new world that is emerging around us. In fact, by all indicators they should have plenty of company.

Errr….seriously? A rambling and disjointed piece that links Larry Pickering to the likes of Anders Brevik!!?? 0/10… Journalism it aint!

Idiot Trumpism, Neonazism, One Nation, Coalition Far Right (now Coalition Centre?) etc and their attendant egregiously ignorant and egregiously stupid bigotry, anti-Arab anti-Semitism, Islamophobia, warmongering, climate change denialism etc etc can only be defeated by (a) clear numerical statement of reality coupled with (b) clear moral conclusion. Unfortunately the Mainstream media are far too used to One Percenter-protective lying by omission. Thus the bottom line in any sensible social/political discussion should be avoidable death (avoidable mortality, excess death, excess mortality , deaths that should not have happened) but these very terms are resolutely ignored by Mainstream media from the Murdoch-dominated Yellow Press of White Australia to the craven, gutless ABC.

Example 1: There are 3,000 million Asians and 1,500 million Muslims between White Australia and Mother England, and only 2 Australians have ever been killed in Australia by jihadis while 85,000 Australians die preventably each year under successive Lib-Lab (Coalition and Labor Right)governments – yet US lackey Australia has been involved in all post-1950 US Asian wars (40 million Asian deaths from violence or war-imposed deprivation) and is fanatically involved in the US War on Muslims (32 million Muslim deaths from violence, 5 million, or deprivation, 27 million, in 20 countries invaded by the US Alliance since the US Government’s 9-11 false flag atrocity that killed 3,000) – ergo, leave the genocidally anti-Semitic, mass murdering US Alliance (see Gideon Polya,“Paris Atrocity Context: 27 Million Muslim Avoidable Deaths From Imposed Deprivation In 20 Countries Violated By US Alliance Since 9-11”, Countercurrents, 22 November, 2015: http://www.countercurrents.org/polya221115.htm )

Without a double dissolution (shame Turnball) Pauline Hanson would probably be sitting on her own. Australia has compulsory voting while ‘democratic’ USA doesn’t and State discouragement of certain voters. If our government can do a little more to help the battlers most of the ignorant alt righters will lose their cardboard boxes.

In order to be an article worth reading the verbiage has to have a premise, backed by facts or at least some indication of why the premise (if any) is valid.
This was word salad aimed at the usual suspects, the bien pissants dropping smashed ‘cado crumbs on their Pads.