Not a happy little Vegemite. Pauline Hanson didn’t seem to be having a merry Christmas yesterday, posting this photo of herself with a personalised jar of Vegemite — instead of saying her name, it read “halaal”. 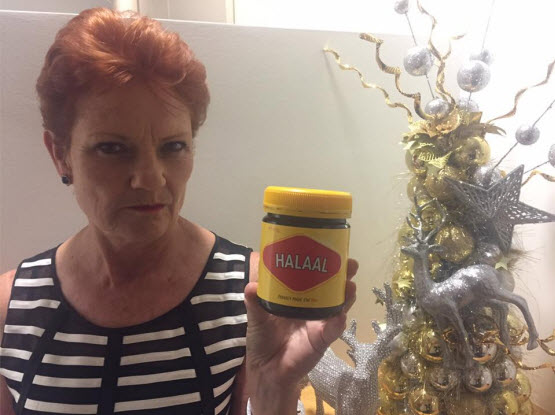 Hanson used the hashtag “itsfunnybecauseitstrue”, but she wasn’t the only one to receive the yeasty breakfast spread. Labor’s Sam Dastyari also received a jar, with a note saying it was in order to be non partisan: 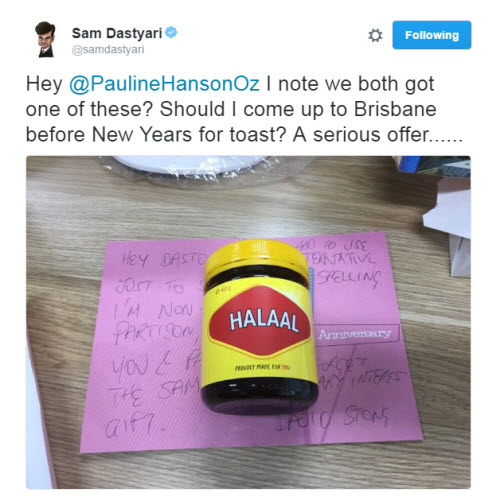 Crikey has tracked down the sender of the Vegemite, a Labor activist called David Stone. Stone told us he was trying to show that halal foods weren’t scary and couldn’t hurt people. He said he used the spelling “halaal” instead of “halal” as that wasn’t allowed by the Kmart website. “It doesn’t have some religious or cosmic power to make people Muslim,” Stone said. He also said he would be happy to share some Vegemite toast with both Dastyari and Hanson to talk about halal foods. Hanson already rejected Dastyari’s offer of sharing a halal snack pack, so we don’t know how this will go.

Onwards through the mire. There’s always that awkward moment at the end of the year where you wonder if you should reply to the boss’ all-company email wishing you all well for Christmas. It would be even more awkward for staff at Channel Seven, who received an email from CEO Tim Worner yesterday in some way trying to atone for the expensive scandals he has brought down on the company. The full text shows that Worner is not planning on going anywhere:

You would all be aware that last Sunday, a former employee released details of an inappropriate relationship with me.

Without reservation, I apologise to you all.

What I did was wrong. What I did is certainly not a reflection of the standards of the Shareholders, the Chairman, the Board, or any of you.

You are entitled to, and I hope expect, better decisions from me.

A lot of the allegations are factually incorrect but guess what, that doesn’t matter anymore.

The one thing I am not doing is making any excuses.

I obviously regret it and most of all I regret the unwelcome attention it has brought to the company and my family.

None of you deserve that. Not one of you.

Your achievements this year, and there are many, should not be tainted and overshadowed by this.

Ten years of ratings domination and another outstanding result from the television Sales team.

The integration of The West Australian, The Sunday Times, the west, perthnow and Seven Perth into one vibrant, buzzing newsroom.

And a magazine business that is transforming itself so quickly that in the last 12 months, according to Neilsen DRM, it has become the fastest growing digital publisher in the country.

For the first time ever, we are the number one media company on line in Australia, a leadership position we built during the 2016 Olympics and have held onto ever since.

You have achieved such feats through bloody hard work and the continued great execution of great ideas.

And in no small way, this is because of the culture at Seven West Media.

You should all be proud of that culture, but no healthy culture is static.

We cannot allow what you have all had to put up with this week, because of my mistake, to be what defines our values.

And I fervently believe it isn’t.

I am in no way sharing the blame here, but I do want to say that, like everything, elements of our culture can be improved and we will focus on absolutely confirming we have a safe and ethical workplace.

I will learn from my situation to help make this a better company. That is my commitment to you.

You have a culture of inclusiveness and of working with respect for each other. This plays a huge part in your capacity to put our customers first and give them what they want, whether they be advertisers, viewers, readers or online users.

You do what you do with great passion and integrity.

Our diverse workforce has been critical to our commercial success. We want to reflect the community of which we strive to be an even more vital part.

Every year we commit to improving our performance from the previous year.

And that must apply to our culture as well.

Next year we will have a renewed focus on underlining our values and the better internal communication of them.

We are also going to commit ourselves to another year of leadership.

The plans for that began a long time ago and are already well under way.

Once again, I thank you and salute you for your efforts in 2016.

I reiterate that my poor decisions should not in any way take any shine off what you have achieved this year.

2017 promises to be another exciting year. We want to continue to transform and it is our culture that enables us to continue that journey with purpose.

Have a safe, healthy and happy break for those able to get one in what is now a truly 24 hour, seven days of every week operation.

And get ready to charge into 2017 with more gusto than ever before.

The Australian‘s new target. The Victorian government has released the job ad for the new manager of the Safe Schools program, after the program made the decision to part ways with La Trobe University and controversial founder Roz Ward. It is advertised as a two-year role with a salary range that goes up to $146,622. The advertisement itself is non-controversial and doesn’t say “no Marxists need apply”:

“Strong stakeholder management skills, demonstrated program and project management and implementation experience are essential. Comprehensive knowledge of and experience in Victorian school education settings and/or the LGBTI community is essential. An understanding of the current issues and opportunities associated with supporting LGBTI young people at school and ability to work effectively within government is essential.”

We also suggest a thick skin to deal with attacks from The Australian, but we’re sure any applicants are well aware of that.

And on that note, merry Christmas from Ms Tips. We’ll be back with more gossip, rumours and fun in 2017.

What a shitty letter from Tim, you will have to load up with the crap in that letter and say nothing if you work at Channel 7 were in a world now full of idiot naked emperors, I dont think the word deserves Capitals in this case.

Apart from the usual TL;DR for touchy Tim’s letter, it deserves a new meme, something like UC;DB for ‘utter crap, don’t bother.