Good morning, early birds. The Arctic sea ice is on the verge of melting, Tony Abbott has slammed a possible new conservative party, and the Tim Worner sex scandal continues to grow. It's the news you need to know, with Cassidy Knowlton and Max Chalmers.

IT’S GETTING HOT IN HERE

Temperatures in the Arctic are up to 50 degrees warmer than they should be in the middle of winter, according to climatologists. The temperature is hovering around zero in some places in the Arctic, which could mean disastrous melting of sea ice. According to The Age: “The polar extremes are part of what is highly likely to be declared as the hottest year in records going back to the 1880s. And so, with 2016 eclipsing both 2015 and 2014, the world would have set a new high mark for three years in a row.”

And Australia’s part in this? A report released yesterday by the Environment Department shows Australia’s carbon emissions rose 0.8% for the year to June, compared with the same period last year. The government tried to spin this as a positive, with Environment Minister Josh Frydenberg saying: “These figures show that Australia’s emissions per capita and emissions per unit of GDP are now at their lowest level in 27 years. It demonstrates that we are able to meet our climate targets without a carbon tax which Bill Shorten and the Labor Party want to bring back.” In fact, Australia’s emissions reduction goals are not based on per capita emissions, with the Paris agreement requiring a 26-28% decrease on 2005 levels by 2030 no matter what the population is by then. And unless we change something quickly, Australia is not going to meet its Paris obligations. “It’s pretty clear that the data is saying that you need to have strong policies in place for Australia to meet the 2030 target,” ACF economist Matthew Rose told the ABC.

“The first duty of the leader is to keep the party together.” — Tony Abbott, the man who stabbed Malcolm Turnbull in the back to take control of the Liberal Party in 2009. Abbott promised when he was deposed in September last year there would be “no wrecking, no undermining, no sniping”, though of course since then there has been nothing but wrecking, sniping and undermining from him. Abbott also took to Twitter:

Abbott says he does not wish to join a new conservative party, were Cory Bernardi and Gina Rinehart to found one. Nationals whip George Christensen, meanwhile, threatened to leave the Coalition unless Turnbull starts pandering even more to the right of his party (difficult as that might be for the PM to do). Former Liberal premier Jeff Kennett, always eager to put his oar in, said the Libs should consider an alliance with Pauline Hanson‘s One Nation. He was contemptuous of Bernardi, delivering this pearler to ABC morning radio: “This is an individual who, for some ego-driven reason, believes he has the answers to the world; he does not.”

NOT EASY BEING GREEN

Speaking of party splits, the Greens are in a bit of a spot of bother as well. At a Sydney meeting on Wednesday night, a hard-left faction of the Greens, called Left Renewal, have presented a manifesto urging the formation of formal factions within the party and an aim to “fight to bring about the end of capitalism”, according to The Age.  Greens leader Richard di Natale is having none of it: “The Greens have never had factions and, like the overwhelming majority of Greens members and voters, I will never support going down the Labor route of establishing formal factions within the party. Of course the Greens do not support the overthrow of capitalism or any other ridiculous notions of the sort.”

Western Australia: Shocker, Rod Culleton is back in court. His various court shenanigans can be difficult to keep track of, but this one is the Federal Court decision whether Culleton owes $205,000 to former Wesfarmers director Dick Lester. He stormed out of the proceedings on this case on Monday after two estranged former associates turned up.

A storm of a different kind also looms for WA, as Cyclone Yvette is likely to make landfall over Christmas weekend.

New South Wales: The publisher of a website that has named two Channel Seven stars alleged to have had affairs with CEO Tim Worner will appear in the Supreme Court to answer proceedings brought by the stars, referred to in court documents as Jane Doe 1 and Jane Doe 2.

How we became addicted to complaining — Waleed Aly (The Age) : “The most successful movements these days are the loudest, which, inevitably, are the most vociferously disgruntled. Politics needs no serious organising principle other than grievance.”

Climate change: why can’t Turnbull turn up the heat on Paris? — David Leyonhjelm (The Australian $): “Devoting all the proceeds of a carbon tax to fund cuts to top personal tax rates and the company tax rate would make Australia more competitive, boost investment, reverse the brain drain and create jobs. Moreover, as an emissions-free source of baseload power, nuclear power has no equal.”

The brutal images that have defined 2016 for Indigenous Australia — Karly Warner and Ruth Barson (Sydney Morning Herald): “We can no longer plead ignorance when it comes to the risks associated with locking people up. Hooded and shackled, hand-cuffed and hosed-down, dismissed or dragged lifeless across the floor, Australians cannot pretend that this is the unpalatable stuff of places far away.”

Weakness is not an option in this struggle for our culture and society against terror attacks — Peter Jennings (Herald Sun $): “Post-war Germany prides itself on its liberal and tolerant values but, like so many countries, including Australia, Germany will now take steps to harden itself against a growing terrorist threat.”

The man believed to be responsible for the Berlin Christmas market attack was recorded by German intelligence agencies offering his services as a suicide bomber, but he was not arrested at that time due to a lack of clear evidence. Anis Amri remains on the run and appears to have a history of evading European authorities. It has emerged that German authorities previously tried and failed to deport him. — Der Spiegel

A resolution due to go before the UN Security Council condemning Israeli settlements in the occupied West Bank and East Jerusalem has been delayed. The resolution is seen as a test of US support for Israel, and President-elect Donald Trump has called on President Barack Obama to veto it. Israeli Prime Minister Benjamin Netanyahu pressured Egypt, which brought the resolution, to hold off on that  motion, potentially indefinitely. — Haaretz

President-elect Trump meanwhile has been busy himself, tweeting that the United States should “greatly strengthen and expand” its nuclear capabilities. — BBC

Pope Francis used his Christmas greeting to hit out at members of the Catholic Church’s bureaucracy who have put their own careers ahead of reform. The Pope said lay men and women should be included in leadership roles, and chastised the “malevolent resistance” to his program of internal changes. — Reuters

Prince Charles, heir to the British throne, has made a rare radio address comparing the rise of populism in Europe to the ascent of fascism during the 1930s. The Prince of Wales warned against the persecution of minority religious groups, noted the record numbers of displaced people, and spoke of the plight of refugees. — The Guardian

Did Failures By German Authorities Lead to Attack? (Der Spiegel): “He was known to the authorities as a criminal and an Islamist and was the subject of an investigation. He had been surveilled by officials for quite some time. They had him on the radar and nonetheless failed to stop the terrorist act officials believe he may have committed.”

The City That Knows How to Eat: An Australian-born restaurant critic is still looking for Melbourne in America  (Eater): “When I got back to L.A. after my summer trip to Melbourne, I had a conversation with my mother, another installment in the long line of conversations we’ve been having for 25 years, the one that goes: Why did we leave? Should we go back? What is it that we’re missing so very much? What is the difference?” 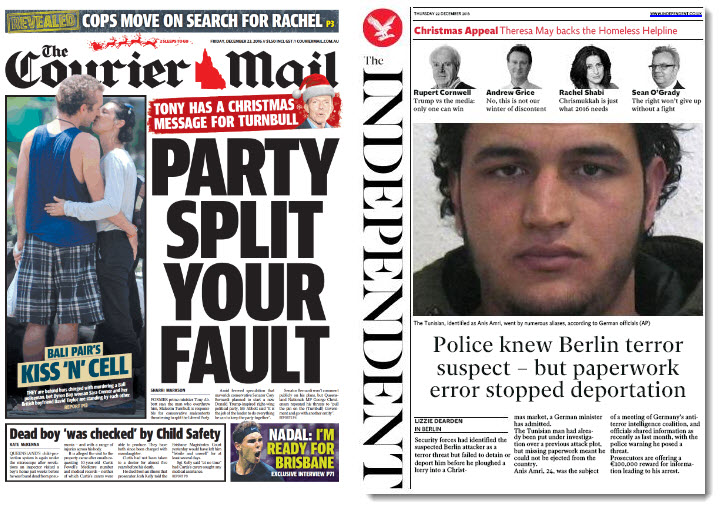