Good morning, early birds. Cory Bernardi is not going to stop trying to make the Conservative Party happen, One Nation's first Asian candidate courts "good Asian" votes, and a "car bomb" was detonated at the Australian Christian Lobby's Canberra headquarters. It's the news you need to know, with Cassidy Knowlton and Max Chalmers.

Rumours have been swirling all year that Cory Bernardi wants to form his own political party, as the Liberals are just too liberal for the arch-conservative and his right-wing friends (think disgruntled backbenchers like Tony Abbott, Eric Abetz and George Christensen). According to The Australian‘s Sarah Martin, Bernardi’s quixotic dreams of an even more conservative Australia have found a sympathetic ear (and bankroll) in mining magnate “don’t call me an heiress” Gina Rinehart. And like many things this year, this rumour is probably Donald Trump‘s fault. Writes Martin: “The conservative firebrand and his ‘very close friend’ Gina ­Rinehart met key members of US president-elect Donald Trump’s campaign team, including former New York Mayor Rudy Giuliani and campaign manager Kellyanne Conway, in Washington last month, fueling fears that the senator might have the support of Australia’s richest woman to bankroll the party and dilute the Liberals’ support base.” Former independent MP Tony Windsor says the PM should be glad to see the back of Bernardi and friends, telling Fairfax: “Malcolm Turnbull should pull on these idiots. What’s the point of being Prime Minister? Bernardi should do us all a favour and get on with it and Malcolm should either piss or get off the potty.” For what it’s worth, 41% of Coalition voters (and weirdly, 11% of Greens) told Essential recently that they would vote for a conservative party to the right of the current Coalition.

A van packed with gas bottles targeted the Australian Christian Lobby’s Canberra headquarters about 10.45pm last night and exploded. According to ACL boss Lyle Shelton, no staff were injured in what he called a “car bomb” incident. 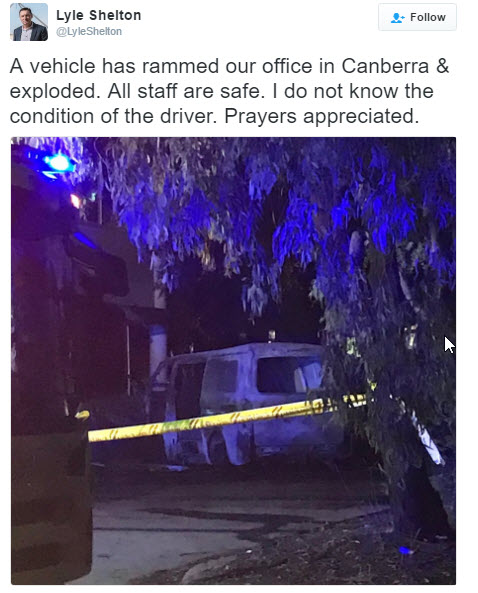 “Police contacted me and told me that someone has driven a white van into the carpark of our office and it has been loaded with gas cylinders and then it has been detonated,” Shelton told The Daily Telegraph.

Indonesian police say they have foiled a plot for a pipe-bomb terrorist attack in the country over the Christmas and New Year’s peak tourism period. Three people were killed in what Indonesian authorities say was a shootout at a house 25 kilometres from Jakarta, during which suspected terrorists are said to have thrown a bomb at police. The Department of Foreign Affairs and Trade has warned Australians exercise a “high degree of caution” if traveling to Indonesia, including Bali, saying “there is an ongoing high threat of a terrorist attack” throughout the country.

“For European people it’s very difficult to distinguish Chinese or Korean or Japanese, and I can understand why [Pauline Hanson] said it. She sees the problem ahead of everybody, including you and me” — Shan Ju Lin, One Nation’s first Asian candidate, who says she is not the least bit offended that her party’s leader warned that Australia was being “swamped by Asians”. Lin says she will be courting the votes of “the good Asians” for the state seat of Bundamba in the 2018 Queensland election.

Victoria: Juvenile offenders will remain in Barwon Prison even though Supreme Court Justice Gregory Garde ruled yesterday that holding them there was unlawful. Reports The Age: “In extraordinary scenes, Justice Gregory Garde initially ordered that the children be removed from Barwon Prison by 4pm on Thursday and transferred to another remand centre in Victoria, before declaring he had no choice but to order them to stay for now.”

Queensland: Former Billabong boss Matthew Perrin, who was found guilty of fraud and forgery on Tuesday, will be back in court as the jury was unable to make up its mind on three additional charges.

Western Australia: The Barnett government will deliver its midyear budget review. Although increased iron ore royalties are expected to help the state’s deficit slightly, the end of the resources boom is wreaking havoc with the state’s economy.

Post-Christmas polling blues will be difficult for the Turnbull government to avoid — Phillip Coorey (Australian Financial Review $) — “The Turnbull government enters this break lagging Labor in the polls but not terminally so. If, however, the summer curse strikes and the government re-emerges in February 2017 in even worse shape, there may be a simple explanation — pensioners.”

With ‘friends’ like Cory Bernardi, Turnbull must watch his back — Sarah Martin (The Australian $): “For Bernardi, however, the motivation is also personal. He loathes Turnbull and his socially progressive views, and he hasn’t forgiven him for urging his sacking from Abbott’s frontbench in 2012.”

Greens have workers in their sights — Greg Hunt (Herald Sun $): “Right now there are families in southwest Victoria who are wondering what their future will be. There are small-business owners in Portland who are unsure whether they will have customers in the New Year. Remember this, cheap words about ‘just transitions’ are simply another way of saying ‘deliberate wholesale job losses’.”

Don’t let new money for family violence fool you – community legal centres have been gutted — Chris Atmore (Guardian Australia): “Liberal federal governments eroded independent advocacy when they forced non-profit organisations to become leaner. But the bigger conservative victory is that many of those same organisations are also becoming meaner.”

German police have named Tunisian man Anis Amri as a suspect in the Berlin Christmas market attack that killed 12 people. The man is believed to have arrived in Germany in 2015 and had his application for asylum denied. His father and security forces told a Tunisian radio station that he previously spent time in an Italian prison over a school fire. He was known to German security agencies and considered a potential security threat. — Reuters

A blast at a Mexican fireworks bazaar set off a chain reaction of spectacular explosions that left at least 31 people dead and scores more injured. Mexican officials said the firework stalls had been set up with appropriate safety precautions, though the site on the outskirts of Mexico City previously burnt down in 2005. — The Guardian

Norwegian far-right mass murderer Anders Breivik has had the conditions of his incarceration slightly eased and will be allowed more time for exercise and visitors. In April a court found the nature of Breivik’s detention violated his human rights, though the Norwegian government is appealing the ruling and denied it was the cause of the recent changes. — Reuters

Two American YouTube stars say they were kicked off a London to New York Delta Air flight after fellow travelers complained about them speaking Arabic. Adam Saleh and Slim Albaher are known for their pranks, but they told The New York Times this was not one of them. They have a massive social media following, and a video of them being escorted off the flight quickly drew outrage around the world. — New York Times

Meeting notes contradict Murdoch claim not to have asked PMs for help (The Guardian): “Rupert Murdoch asked for Tony Blair’s help to overcome European commission opposition to a £800m TV deal, contradicting the media mogul’s assertion this week that “I have made it a principle all my life never to ask for anything from any prime minister”.

The strange case of the American death penalty (The New Yorker): “All those reasons for the decline remain, but so, too, does the United States remain a country that has had the death penalty in effect for virtually all of its history. That’s not likely to change, either. The death penalty may keep shrinking, but it will probably never entirely go away.” 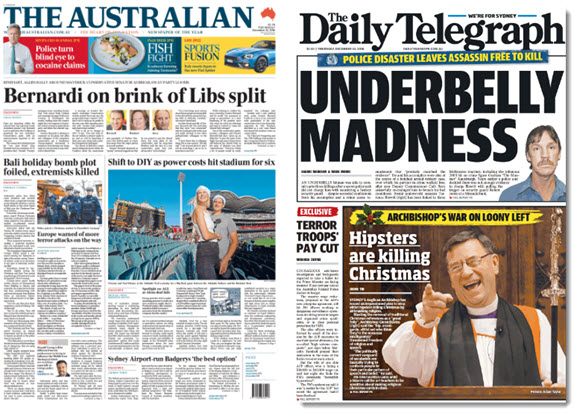 How can you show that Tele headline – Hipsters are killing Christmas – without explaining?! Obviously I’m not going to buy the rag to find out what our bearded brethren are doing to murder Chrissy so I’m left in the dark: unnecessary torture at this time of the year, clearly in the spirit of killing Christmas!

P.S. I meant to add that I really like the Worm too.