Just five days out from Christmas, the Attorney-General’s Department has dropped off its present. Or rather, not the present, just the wrapping: metadata for everyone. One of the big concerns about mandatory data retention was that the data collected for the purposes of law enforcement could, in fact, be obtained during civil court proceedings, like say trying to catch people pirating TV shows and movies. The government agreed to amend it so data retained under the law could not be accessed in civil litigation, but certain exclusions to this ban could be made via government regulation. The government has now launched a review into this with a tight deadline of January 13 asking people what data and in which circumstances the data should be available in civil proceedings. It will be interesting to see if any film studios lobby for the data to be made available to them to chase down pirates.

Incidentally, Telstra has been quick off the mark to implement a block on The Pirate Bay — one of the websites it was ordered to block last week by the Federal Court. The block appears to only be on Telstra mobile at this stage; iiNet/TPG has yet to implement the block, but they have 15 business days from the ruling. Also, the block is easy to bypass with a VPN.

BuzzFeed journalist Alice Workman also tweeted that the site isn’t blocked on the free Parliament wi-fi. Which is curious, considering legitimate websites such as gaming site Kotaku have been blocked in the past. 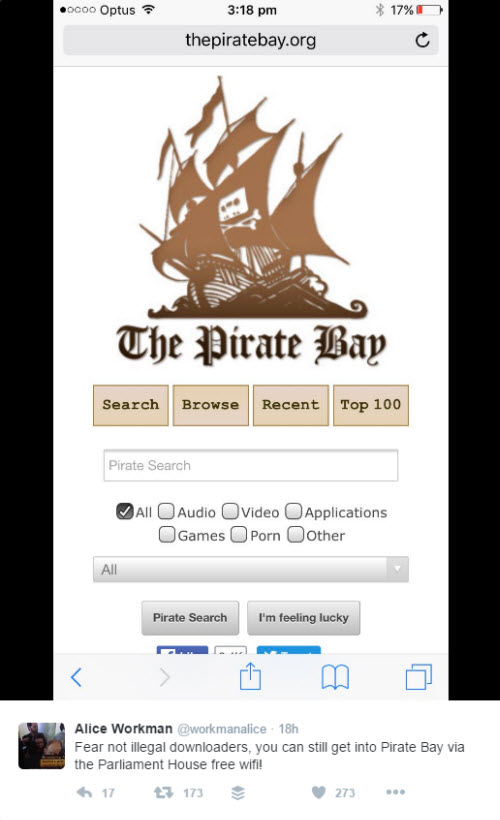