The 2016 Crikeys: the best and worst of business

Another year, another bunch of businesses and businesspeople to live in infamy.

While the sharemarket continued to tread water and property prices in Melbourne and Sydney rocketed, we took a look at some of the business people in the news, often for all the wrong (and occasionally for the right) reasons. Without further ado, below are Crikey’s 10th Annual Business Awards.

Unfortunate Legal Purchase of the Year

To the 30-year-old founder of torrent-streaming site Kickass Torrents, Artem Vaulin, who was finally arrested by US authorities in July. At the time of his arrest, Kickass was the world’s most popular destination for illegally downloading television shows and movies. Perhaps Vaulin should have stuck to his knitting. Authorities were able to trace his whereabouts after he made a legal purchase from iTunes, proving that no good deed goes unpunished.

Paycheque of the Year

To former Google executive Marissa Mayer, who was expected to be the messiah of Yahoo after being appointed as CEO in 2012. Since then, Mayer was paid US$139.6 million to undertake a series of evidently disastrous acquisitions, including paying more than $1 billion for Tumblr (which was later written down to zero). Yahoo was also sued by former executives who accuse Mayer of purging male employees. Yahoo shareholders looked like finally being put out of their misery when Verizon offered US$4.8 billion for the market darling, however even that is now in doubt after several widespread hacking instances became public. In a sign of just how poorly Mayer was viewed by investors, for most of her highly paid reign, Yahoo was valued at less than its stakes in Alibaba and Yahoo Japan — that means Yahoo would have been far better placed having a wooden duck running the place than Mayer.

Award of the Year

To Northern Health, which in its wisdom nominated Alexander Burnside Robinson for Australia Day honors. Robinson had donated several million dollars to hospitals over 18 years. While Robinson’s donation was no doubt appreciated, Northern Health neglected to mention that the Robinson riches were derived from a poker machine empire that generates millions of dollars each year from the very community he was donating to. Experts suggest that poker machines contribute to mental health problems, anxiety, violent crime, domestic violence, poverty and child abuse.

Hard-Hitting Business Commentator of the Year

To the AFR’s Matthew Stevens, who noted that “few Australian energy companies are led by someone with the experience and commercial acumen as Origin’s Grant King”. Stevens’ glowing praise for King doesn’t appear to be shared by Origin’s investors, who have seen the company’s share price hammered from $14.28 in 2010 to only $5.16 at the time of King’s departure (shares have since rallied to $6.47). Origin’s share price retreated back to levels last seen in 2004, only a few years after Origin was spun off from Boral. Had you put your money in a term deposit over that time you would have doubled it. Origin’s share price malaise stemmed from King’s complete misreading of energy prices and decision to invest billions in the Gladstone LNP project.

The Elizabeth Nosworthy Award for Company Director of the Year

To former AFL boss and one-time salesman Andrew Demetriou, who managed to accumulate a trifecta of horrors in 2016. First was radiology provider Capital Health, of which Demetriou has been chairman since 2014. At the time Demetriou became chairman, Capitol’s share price was around 50 cents — today, shares are fetching a paltry 11 cents, valuing the business at just $57 million. Demetriou is also a non-executive director of Crown Resorts — 18 of its staff members were jailed in China after allegations that Crown violated gambling regulations (17 of the employees remain behind bars). Demetriou is also chairman of education website Acquire Learning, whose $800 million IPO appears to have been placed on hold after the ACCC accused Acquire of engaging in unconscionable conduct, making false or misleading representations and breaching the unsolicited consumer agreements provisions in the Australian Consumer Law.

The Phil Green Memorial Award for Dodgy Bonus of the Year

To the board of embattled ambulance-chasing law firm Slater & Gordon, which thought it was a good idea to pay senior executives a bonus this year while the firm teeters on the edge of insolvency and lenders frantically offload debts for a fraction of face value. The law firm undertook one of the worst acquisitions of all time when it purchased UK-based firm Quindalls and in the process lost more than a billion dollars. Despite its share price falling by 96%, the board felt it appropriate to pay CFO Bryce Houghton a bonus of $189,000 and COO Felicity Pantelidis a $93,750 cash bonus. The board noted that the Houghton’s bonus was due to him finalising a new debt deal with bankers, which shareholders would be forgiven for thinking would be part of his normal job.

Honourable mention to the Ardent Leisure board, who thought it a good decision to pay CEO Deborah Thomas a $167,000 cash bonus a few days after four people were killed at Dreamworld. Thomas eventually donated the cash bonus to charity.

Family of the Year

It was another action-packed year for the Hartman clan. Convicted insider trader John Hartman got his (second) day in court when he gave evidence against former best mate Oliver Curtis. Based on Hartman’s testimony, Curtis was jailed while John managed to find work for billionaire miner Andrew Forrest in Perth. Meanwhile John’s brother Ed, a former UBS banker who was mentioned in Curtis’ trial for allegedly attempting to  fix a horse race, bobbed up in the US as an investment manager for the widely respected fund manager Caledonia, before picking up a gig at News Corp. Meanwhile, the most successful of the Hartman brothers, Luke, continues to enjoy remarkable success running property developer Metro (Luke was valued by BRW at $145 million this year). Patriarch Dr Keith Hartman is one of Sydney’s top-rated obstetricians, delivering more than 10,000 babies, including the children of Lachlan Murdoch and James Packer. Christmas dinner would certainly be interesting at the Hartman clan.

Merger Rejection(s) of the Year

To the CEO of smartwatch manufacturer Pebble, Eric Migicovsky. In his wisdom, Migicovsky elected to reject a takeover offer from watch marker Citizen in 2015 worth US$750 million (and a subsequent offer from Intel for US$70 million). A year later Pebble was sold to Fitbit for US$34 million to US$40 million, allegedly less than the value of the company’s debts.

Unexpected Indictment of the Year

To former young rich lister Zhenya Tsvetnenko, whose run of luck came to an end in July after he was indicted in the United States for allegedly running a scheme to defraud consumers by charging unsuspecting mobile phone users for unwanted text messages. Few would have suspected Tsvetnenko of ever being involved in nefarious activities after he debuted on the Young Rich List in 2009 with an estimated wealth of $107 million emanating from a mysterious mobile phone business. As part of the article, Tsvetnenko posed for photographs astride his white Lamborghini LP560 (one of his seven supercars) and a private jet. Not to be left out, Tsvetnenko’s wife, Lydia, was photographed draped across the bow of a motor yacht. We are currently unsure of whereabouts of the Lamborghini.

Bubble Blower of the Year

To perennial champion the Reserve Bank of Australia, which continued to inflate Australia’s housing bubble by reducing interest rates to all-time lows as the housing market in Sydney becomes one of the most expensive globally. Despite locking almost an entire generation out of the housing market, the August rate cut did nothing to stimulate growth, with the economy going backwards in the September quarter. In December, to bolster their credentials, the government appointed Carol Schwartz to the RBA board — perhaps forgetting that Schwartz, the daughter of retail magnate Marc Besen, was the chairman of embattled homewares retailer Temple & Webster, which was dubbed the worst float of the year in 2015 after its share price fell from $1.10 to 17 cents.

CEO of the Year

Former Market Darling of the Year

To Laura McBain, CEO of organic baby formula seller Bellamy’s. Since listing in August 2014 for $1, Bellamy’s had been one of the best performing companies on the ASX, reaching $15.38 in August 2016. Fast forward a few months and Bellamy’s reputation lies in tatters, with the company’s share price down by 57% as sales in China have slumped and Chinese retailers heavily discount Bellamy’s products.

Unicorn of the Year

For those who aren’t followers of the start-up sector, a unicorn is a venture capital-funded business that has been valued at upwards of US$1 billion. One of the fastest-galloping unicorns was blood-testing company Theranos, which was valued at US$9 billion in 2014 after raising US$400 million from investors. Founder and CEO Elizabeth Holmes, was worth a staggering US$4.5 billion by the time she was 30. With a board filled with political hacks like Henry Kissinger, George Schultz and Bill Perry (none of whom appeared to know anything about medical testing or business), the company would soon be accused of fraud (ironically it was Schultz’s grandson who blew the whistle on the company to The Wall Street Journal).

Holmes’ net worth has dropped from US$4.5 billion to precisely zero as Theranos faces lawsuits from furious investors who claim they were lied to. Former partner Walgreens, is also taking legal action after Theranos faced a investigation by the SEC and FDA. Even a journalist from Fortune is accusing Holmes and Theranos of misleading him for a 2014 cover story.

To Jeff Bewkes, CEO of Time Warner, who in 2010 noted “Is Netflix a threat? Is the Albanian army going to take over the world?” Netflix’ market capitalisation is now US$53 billion (up about 1000% since 2010). 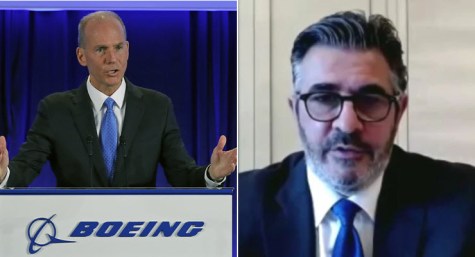 Every post a winner for Fahour’s guests at Games

Tell you what. Never mind Origin shareholders. Try being a customer. The biggest bunch of thieves in the electricity world. Crooked and incompetent.

An eye-opening piece, thanks. It never ceases to amaze how scum regularly rises to the top and remains there.

It seems that, for the BigAr$e end of town, above a certainly level failure is no barrier to continuing overpaid sinecures.

By nominating a “CEO of the Year” based on a single year’s outcome you do perpetuate the myth that these people have particular managerial skills beyond those of your average punter, Adam. The rest of the list makes it pretty clear how random (or corruption-driven) is a great deal of business success, but.