The assassination of the Russian ambassador to Turkey, Andrey Karlov, has cast into sharp relief some of the competing tensions that currently wrack the Middle East. The Turkish government is blaming the assassination on followers of Muhamet Fethullah Gulin, who was also held responsible for an attempted coup earlier this year. This appears, however, to be a blind for the Turkish government in their sensitive relations with Russia over the war in Syria.

Following the earlier downing of a Russian aircraft by Turkish fighters last year, relations between the two countries had become strained. Those relations have since warmed as Turkey rejects criticism from the West over its crackdown on internal opposition.

This relationship is complicated, however, by Turkey and Russia backing opposing sides in the Syrian civil war. Russia is the mainstay behind Syria’s Assad regime. Turkey backs local militias near its southern border and has been accused of supplying weapons to extremist Jihadi groups fighting the Assad regime.

The Assad regime’s victory in Aleppo has been countered, to a small extent, by rebel forces consolidating their position in Idlib, about 50 or so kilometres to the southwest. This is likely to be the site of the next major battle, also subject to intensive Russian air attacks and ground forces made up of Syrian regulars, Hezbollah militias and Iranian “volunteers”.

[Three things you don’t understand about the Syrian war]

Having been diplomatically and then strategically outwitted by Russia and since drawing down on its limited support for anti-regime forces, the US is effectively abandoning Syria to Russian proxy control. By contrast, the US, its somewhat still feeble government allies and increasingly powerful Kurdish forces in neighboring Iraq are slowly shutting down Islamic State (ISIS) forces.

The earlier spectre of an all-conquering Islamic state is now receding, with even the Kurds controlling more territory across Iraq and Syria than does ISIS. The inevitable victories in Syria and Iraq do not imply, however, a beginning to an end of the conflict in the Middle East.

Spokesman for Iran’s powerful Revolutionary Guards, General Hossein Salami, told the official Iranian news agency that: “The victory in Aleppo will pave the way for liberating Bahrain.” Bahrain has a majority Shia populated but is ruled by a Sunni royal family, against which there was a failed uprising in 2011.

Salami added that, following the fall of Aleppo, Iran intends to expand its intervention to also include Yemen on Saudi Arabia’s southern flank and Mosul in northern Iraq. Salami’s comments were in response to by UK Prime Minister Theresa May’s stated opposition to Iranian influence in Gulf states.

Countering this assertion, the United States has gone soft on arms restrictions to Saudi Arabia for its allegedly indiscriminate attacks on Yemen’s Iranian-backed Houthi rebels. It is the US intention of maintaining an allied regional counter-balance to Iran.

As with these other flash points, the war in Syria has — almost since its inception — been one by proxy, broadly along lines of religious affiliation or alliance. Syria’s Assad family are Alawis, a Shi’ite sect, with Sunni Islam being the common denominator among its otherwise fractured opposition.

It has been the fracturing of the opposition, between jihadi forces aligned with the Saudis and other Gulf states, northern ethnic groups linked to Turkey, “moderates” with the US and, independently, Islamic State, that has been its greatest weakness.

[Russia is winning the Syrian war]

Yemen and Bahrain are similarly fractured along Sunni-Shia lines. Mosul is not a Shit’ite city, but is in the process of being recaptured from ISIS by, among others, pro-Iranian Shia militias.

In Syria, countered by a strategic and organisational unity between the Syrian regime, Iran, Russia and Hezbollah, the anti-Assad groups and their strongholds will, as the war continues, be picked off one by one. However, with around 70% or more of Syria’s population being aligned against the regime, a united future for the country can only be assured by reintroducing the type of repression that gave rise to the current civil war.

Similarly, the Salafist Sunni rhetoric originating in Saudi Arabia has become the battle-cry for other Sunni Salafis, be they ISIS or al-Nusra/al-Sham. This has ensured that the regional divisions will continue to be played out along clear sectarian lines.

The lines on the map of the Middle East that demarcate countries are, as a colonial construct, entirely artificial. But the region’s more recent identification along distinct sectarian lines is very much more real.

*Damien Kingsbury is a professor of international politics at Deakin University

The deadly cast of characters in Iraq’s lethal ISIS game 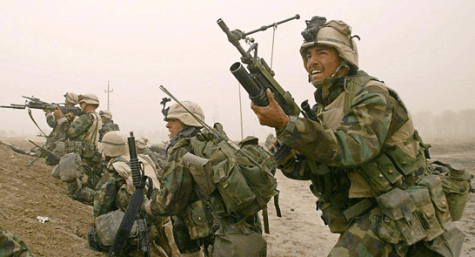 Reclaiming Mosul would change everything

The unrest has come at least in some part from the destabilisation brought about by the invasion of Iraq. In most countries the Sunni, Salafi,Shiia divide was fairly quiet. Then came the Sunnis and the Saudis. Turkey was a tacit ally of ISIS at the start and Erdogan in an IslamoFascist piece of scum. The talk of the numbers involved in the coup is rubbish and he is using it as an excuse for oppression. Turkey was a good country, now it is not.

No doubt. But to what extent is this sectarianism being put to use as an instrument of geopolitical designs? Are we talking about wars of religion, or wars cloaked in religion?
Iran is pursuing a land route through south and western Iraq and northern Syria to the Mediterranean, in what would be a near perfect geo-strategic and hegemonic regional coup, and has thoroughly militarized majority Shi’ite populations in all those areas to that end. Saudi Arabia desperately wants to block this to contain Iran’s imperial resurgence (naturally), and has militarized Sunnis across the Middle East and covertly facilitated ISIS in Syria and Iraq to that end, all the while suppressing oil prices to weaken Iran’s primary benefactor, Russia.
In consequence, sectarian war in the Middle East is virtually inevitable, not because Arabs/Persians are hopelessly sectarian or ‘tribal’ (read ‘pre-rational’), but because it’s totally intended. The alleged “clear sectarian lines” have far murkier motives than religious ideological rivalry – specifically, the perpetuating of local autocratic regimes (in both Iran AND Saudi Arabia) in the service of great power imperial rivalries.
That’s why calling the lines on the map in the Middle East a ‘colonial construct’ fails completely to recognise the contemporary rather than historical sources of current conflicts. Virtually the entire world outside Europe was a victim in some serious way of imperialism. But only the Middle East is consumed by perpetual war. Blaming that on Europeans is as blind as blaming it on Orientals. Look instead to blame it on those who actually benefit today from that carnage. Follow the money!

This author’s pieces are as empty as the holes he leaves when he does his cut’n’paste – never a single factoid amidst the listicles of other reportage.
There is a reason that the US remains shtumm about Saudi & emirati funding and support for the Syrian insurgency – it wants to keep Bahrain’s naval base of its 5th Fleet to protect the oil trade.
Shaitain’s Blood indeed.