Who’s who of the right. It’s Christmas party season, and a tipster tells us there was an interesting crowd at the party held by none other than Andrew Bolt. The News Corp columnist and Sky News host is unlikely to hold a “holiday” party, and we’re told he had many of his usual friends in attendance — former speaker and now Sky News guest Bronwyn Bishop was there, as was Cory Bernardi and Concetta Fierravanti-Wells. There was just one MP from the Labor side of politics — new Senator Kimberley Kitching was there with her husband, Andrew Landeryou. Kitching has given just one interview since being parachuted into Stephen Conroy Senate spot at the behest of party leader Bill Shorten — to Bolt. Got any Christmas party goss to share? Fill us in.

Lambie gets a package after all. Also on Christmas, Senator Jacqui Lambie has shared the present she received as part of her office Kris Kringle. The Tasmanian Senator showed off her gifts — a “Grow your own pecker” and “Sexy Strip Mug” — on Instagram with a smile. Picking the boss in the office Kris Kringle can be a daunting task, but it looks like Lambie’s colleague was up to the occasion, and the gifts were appreciated. Lambie has previously been very frank about men, telling a Hobart radio station in 2014 what she looks for in a potential suitor: “They must have heaps of cash and they’ve got to have a package between their legs.” Now she can grow her own — “just add water,” reads the packet. 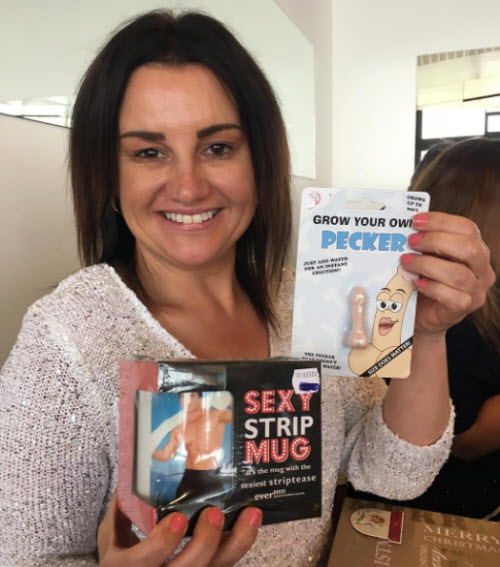 Murdoch here. Rupert Murdoch has decided that he just can’t take it any more, writing a letter to The Guardian in the UK claiming to be misquoted. Murdoch writes:

“On a number of occasions now your paper has quoted me as saying: ‘When I go into Downing Street, they do as I say; when I go to Brussels, they take no notice.’

“There is much fake news published about me, but let me make clear that I have never uttered those words. I have made it a principle all my life never to ask for anything from any prime minister.” 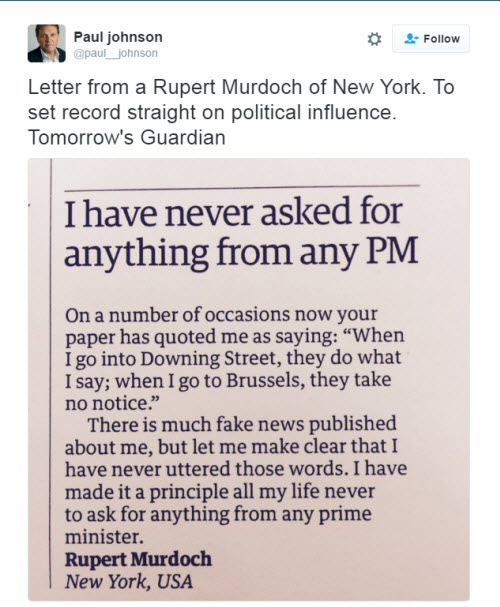 So where does the quote come from? Journalist for the Evening Standard Anthony Hilton claims Murdoch said it to him as an explanation for why Murdoch was opposed to the European Union. In a piece published in February Hilton says Murdoch made the claim “some years ago”, so maybe Murdoch has forgotten?

Scowling for Xmas. We have taken note of many of the Christmas cards sent out by our pollies this year, from Bible quotes to messages lost in translation, and now we have a sequel to one of the best cards of last year. Shadow assistant treasurer Andrew Leigh sent the best Christmas card of them all last year, when his youngest son, Zachary, decided he wasn’t in the mood for a festive photo and scowled at the camera while his siblings and parents smiled together. This year, we see a smiling Zachary alongside his scowling family. 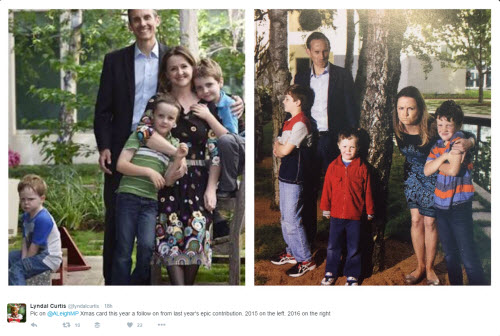 Who will be our sexiest pollie? Voting closes for Crikey‘s annual Arsehat, Sexiest Pollie and Person of the Year awards at midnight on Wednesday, in time for us to announce the winners on Thursday. The votes are close in some categories, and your contribution could swing it. You can vote here.

“I have made it a principle all my life never to ask for anything from any prime minister.”

I want a kitten for Xmas. To call it Jacqui.

Choosing between going to Bolt or Lambies Christmas party would be a no-brainer – literally and figuratively. Jacquie’s company would be so much more fun however.

The Leigh family Xmas card is one to treasure – unlike the usual glittery sleigh bells nonsense.

Or, in the case of the Dutton-Bernardi-Christensen franchise, “slay bells”?

So its not true that Murdoch asked PM Whitlam for a diplomatic posting?
Is this blanket denial of lobbying PMs for special favours just a part of the fact free zone that the Murdoch media has championed on three continents.
Maybe its just another sign of the classic LNP “I can’t recall” stage of temporary political dementia.