The untested complaint alleged a culture of exploitation of female employees at Seven. It named two of Seven’s on-air talent, as well as two other women in administrative roles at the network, as having engaged in “sexual relationships” with the married executive. These relationships, the complaint reads, were “well-known through-out the companies … and the subject of much gossip at Seven”. The complaint also makes the untested claim that in November 2013, at Seven’s “upfronts” (where the upcoming year’s programming is shown to prospective advertisers and relevant reporters), Worner got drunk and “harassed several female staff members”.

Crikey approached Seven about these claims and was told to refer to yesterday’s statement. That statement said it “rejected totally” any references to other employees made by Harrison, “including any allegation that other current or former employees have been paid off”.

“The former employee failed to progress her complaint in the Australian Human Rights Commission,” the statement notes.

Harrison’s HRC complaint also fleshes out her assertion that she was unfairly targeted for her use of the company credit card. Seven rejects the assertion. “There was a general practice of indiscriminate credit card usage at Seven West,” the complaint reads, adding that “it was known and accepted practice that a number of other staff also used Ms Harrison’s work credit card for their expenses, and that Ms Harrison’s card was the ‘master card'”:

“There was a general practice at Seven West and Pacific Magazines for employees to use company credit cards for personal expenses and then make a reimbursement. Generally these employees write a cheque or transfer money …

“[Harrison] did not understand why she would be targetted for an investigation, when after years of using the card she had never received any warning or notice of any concerns regarding her credit card usage.”

The detail of Harrison’s dispute with Seven is fleshed out in about 150 legal letters between the parties, seen by Crikey. The copious correspondence, which took place over two years, shows discussion that at least some of Harrison’s credit card usage was for goods used by other employees, including Weight Watchers memberships for many Pacific Magazines staff.

The documents also reveal Seven’s counter-arguments to Harrison’s claims, including the claim that she had been unfairly targeted. Seven’s lawyers said that when the $14,000 in allegedly misappropriated expenses was discovered, the matter went up to the audit committee of Seven West Media, which itself commissioned the further investigation.

The legal documents also reveal that Harmers Workplace Lawyers, at that point acting for Harrison, served Fairfax with a legal letter over an article by Rear Window scribe Joe Aston that alluded to an “expenses scandal” at Seven, saying an employee had “accrued more than $200,000 in unauthorised company expenditure over a period of more than five years, including for household items”. The employee, whom Aston did not name and said he had been unable to contact, argued this was “within company guidelines”, and that Seven gave the employee “the benefit of the doubt” over it before confidential settlement.

Harrison’s lawyers were concerned Seven was backgrounding journalists against Harrison in breach of its deed of settlement. They also said the article was “grossly inaccurate and has caused significant harm to our client’s personal and professional reputation”. Their concerns notices to Aston and Fairfax, which Crikey has seen, attempted to find out who his sources had been. It followed an earlier assertion, also delivered in a testy legal letter, that Seven public relations supremo Simon Francis had told journalists at the 2014 Walkleys about Harrison having left the company after a credit card fraud investigation. Seven’s lawyers denied that Francis had said anything to that effect, and denied he was the source of the article. And anyway, Seven’s lawyers said, Francis had not been informed about the expenses investigation, the terms of the deeds, or about why Harrison left Seven. Seven’s lawyers also queried whether Harrison had spoken to Fairfax herself and demanded a statement that she had not done so, saying her monthly payments from Seven under the settlement were in jeopardy until this assertion was secured.

Fairfax never responded to the legal letter, and Harrison did not pursue the matter with Fairfax further.

The documents also show how negotiations between Harrison and Seven broke down late this year. Sam Macedone, a media-savvy Sydney lawyer, was hired to represent Harrison after she dismissed her team at Harmers. Macedone drafted up a third deed of settlement, but this was never signed by Seven, which, at that point, had halted the payments to Harrison. It had further non-disclosure clauses on all parties, and a $195,000 payment to be paid by Seven for “alleged personal injury”. That final deed, which was being negotiated in late October, was never signed.

According to an email sent from Harrison, Macedone shortly after “excluded himself … feeling there is no way forward to finalising Deed 3 with Seven … as they will not negotiate their position on client files”.

It was as this final attempt at mediation failed that Harrison decided to go public. Crikey understands she has been talking to various media outlets for a number of weeks to try to get the story up, but all had been sitting on it. So she went the nuclear road, with Sunday’s mass-email of her deeds and statement.

As of Tuesday morning, Harrison had still not been contacted by Seven over her public statements. 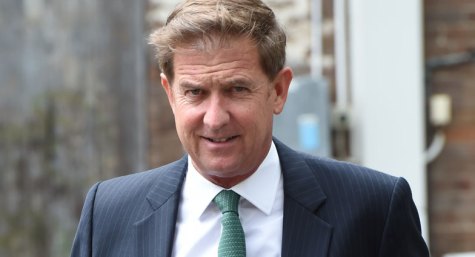 Other than embarrassing the object of these allegations, what is the point of repeating them under this hysterical headline? What public interest, or subscriber interest, is there in the fact that uncorroborated allegations have been made against this person? Little seems to be achieved other than encouraging this kind of legal/media strategy?

The quality and integrity of Australia’s media is rightfully a core concern of any publication committed to robust democracy, but I agree NAF, voyeuristic muckraking (even if it concerns a high profile media executive) is hardly worthy of Crikey. Corporate venality affecting the national interest, rather than individual venality affecting the (legitimate) personal interests a few, would seem the more appropriate level for quality journalistic attention. So, how SBS and ABC executives are currently decimating morale at their organisations deserves proper telling, but how a dick gets his kicks with a few chicks on the quick, probably doesn’t.

This is important why?

This is your lede?
Who cares? Why is it more important than any other workplace sexual matter? This isn’t even about sexual harassment – it was a consensual affair.
One again Crikey shoves the soap-opera of journalists’ lives down the throats of those who subscribe to an independent news/analysis/opinion service.
Crikey, you’ve got to stop padding out your emails with this febrile rubbish.

OK, we got it, you gotta fill space in end of year Crikey but this is not why the majority of us subscribe – this sort of drivel is available in bilk elsewhere.
As far as I can make put, adults of varying gender had sexual relationships for whatever reasons they chose – end of.