Essential: 2016 a bad year for politics

Voters say 2016 was a terrible year for Australian politics, and 2017 isn't shaping up to be much better, according to Essential.

Voters believe that 2016 was a bad year for politics, and 2017 will probably pretty awful, too, according to the latest Essential Report.

There was a double dissolution election, a new cast of characters in the Senate, the return of One Nation, and the government with a one-seat majority in the House of Representatives in 2016, and according to Essential, 62% of voters believe it was a bad year for Australian politics, compared to just 9% of people thinking it was a good year, and 24% sitting on “ehh”. 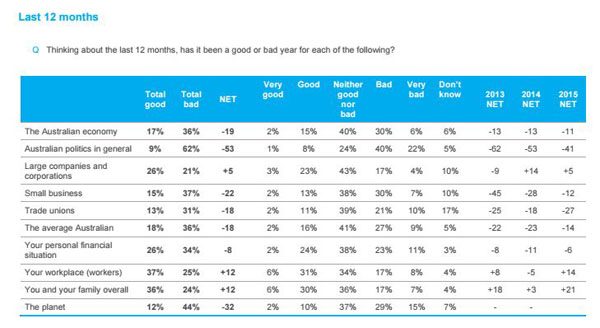 Whether it is the climate, the US elections, the war in Syria or other global matters, 44% of voters also said it was a bad year for the planet, compared to just 12% who thought it was a good year. Interestingly, in almost equal amounts, people thought it was a bad year for the Australian economy (36%) and the average Australian (37%) but reported it was good for themselves and their family overall at 36%, and their workplace at 37%.

Similarly voters are more optimistic about 2017 being good for themselves and their workplaces at 39% each, but half of voters (50%) say 2017 will be another shocker for Australian politics, and 41% say it’ll be overall bad for the planet.

As the government deals with a $10 billion downgrade in the budget position, 36% of voters believe the state of the Australian economy is poor, compared to 23% who say it is good. People who have drifted away from the four biggest parties are more likely to see the economy as being poor at 59%, while Coalition voters are far more likely to see the economy as positive at 39%.

A majority of voters feel about the same amount of job security over the next two years, at 51%, with Greens voters and other voters more likely to feel less secure in their jobs at 40%.

Voters have also said they believe Turnbull is more likely to understand and act on issues close to people running large corporations (57%) and people with high incomes (56%) than any other category. They don’t believe he understands issues facing the unemployed (45%) or people on low incomes (48%).

There was no change in the first preference or two-party-preferred positions for either of the two major parties, keeping their 37% first preference votes from last week, and Labor sitting on 53% over the Coalition on 47% two party preferred. Pauline Hanson may have lost Rod Culleton this week, but her party regained 1% point back up to 8% primary vote. The Greens also gained one point back up to 10%.

Strange, there did seem to be comments yesterday.
I would challenge anybody to check the figures in such smal, low-res text on these tables.