Good morning, early birds. We survived MYEFO (just) with our AAA rating intact, but that does not mean it was good news. Plus codeine is going to be prescription only, and Donald Trump will be formally elected (which perhaps will have you reaching for the codeine). It's the news you need to know, with Cassidy Knowlton and Max Chalmers.

BY THE SKIN OF OUR TEETH

Treasurer Scott Morrison is breathing a huge sigh of relief — the mid-year budget update was bad (the deficit is expected to blow out by $10 billion more), but ratings agencies have decided to hold their fire for now and allow Australia to keep its AAA rating. Why is that so important? Writes Fairfax’s James Massola: “A cut to Australia’s AAA rating — the first since 1986 – would push up the cost of borrowing for state and federal governments, and the cost of Australians’ mortgages. It would also blunt the Turnbull government’s claims to be better economic managers than Labor and likely have a flow-on effect on consumer confidence, which is already sagging in the lead-up to Christmas.”

Morrison, rather unsurprisingly, has announced that the way to get the economy back on track is to cut the corporate tax rate to 25%. “One of the important things that we need to see in the economy going forward is increased investment,” he said. Also included in MYEFO: the Green Army has been honourably discharged, aged pensioners living overseas will lose some of their entitlements, and the departure tax will be increased by $5, to $60, from July 1.

The painkiller codeine will be available only with a prescription from 2018, reports The Australian. The decision to pull the over-the-counter drug was first mooted in October last year (many people, including Crikey‘s Bernard Keane, were very against it), but the Therapeutic Goods Association decided to kick the can down the road and debate the issue. The TGA decision to ban over-the-codeine is expected before Christmas, with a lead-in time of more than a year.

“This relationship finished some years ago and I apologised at the time and am still trying to make amends. I am obviously filled with the deepest regret and shame.” — Seven CEO Tim Worner, addressing allegations that he had an affair with an executive assistant at the company. More salacious details have come out today from the EA’s statement, including allegations of cocaine use and four other extramarital affairs (the network says the statement contains”wide-ranging inaccuracies”).  Seven’s stocks have fallen 8% in the wake of the scandal. 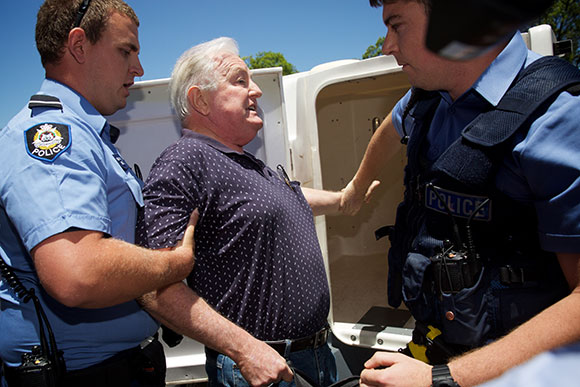 Western Australia: Former One Nation Senator Rod Culleton is to get a trial allocation in the Perth Magistrates Court in relation to claims that he boxed in a car with hay bales as part of a dispute with creditors. Yesterday Culleton walked out of a separate Federal Court proceeding in Perth (this one related to a failed 2009 deal Culleton struck with former Wesfarmers director Dick Lester and a previous judgement ordering that Culleton pay Lester $205,000 in damages for lost rent over the deal). When two men turned up in the public gallery, Culleton said his wife, Ioanna, had taken out violence orders against them, and Culleton stormed out of court . In a dramatic turn of events, police arrived at the courthouse and removed both men (one of them is shown above).

New South Wales: Convicted former NSW Labor MP Eddie Obeid will make an application for bail today, less than a week after being sentenced to five years in prison for corruption. It is expected Obeid’s lawyers will argue for bail based on exceptional circumstances, including the ex-MP’s ill health.

South Australia: Year 12 students will find out their SACE results.

United States: The electoral college will meet today to formalise Donald Trump‘s victory. In the US electoral system, voters technically cast a ballot for “electors,” who in turn vote for the candidate who carried the state they represent. There has been a campaign to encourage electors to break with the voters who chose Trump and have the electoral college anoint someone else (those who do repudiate the voters’ choice are called “faithless” or “Hamilton” electors). But it is widely expected that the number of mavericks will be too small to deny Trump the prize.

Re MYEFO, here’s a reality check: we have to pay our way — Jennifer Westacott (The Australian $): “The equation is relatively simple: spending restraint is needed as well as additional savings measures. This means continuing to redesign major spending programs to cut waste and deliver better value for taxpayer dollars, while better equipping the economy to support jobs and prosperity.”

Blame game hides real reason for deficit difficulty — Ross Gittins (Sydney Morning Herald): “Morrison speaks at length about the government’s efforts to “repair” the budget, but the truth is that, since the rejection of the government’s first budget by the public and the Senate, it has made no further effort to improve the budget balance, either by net cuts in government spending or net tax increases.”

MYEFO had one eye on the rating agencies, and the other on the bush — Chris Richardson (Australian Financial Review $): “A ratings downgrade hasn’t been a bullet dodged as much as it has been a bullet outrun. It wouldn’t take much to bring that risk back into play.”

Malcolm Turnbull could do worse than starting 2017 by draining his own swamp — Stephanie Peatling (Sydney Morning Herald): “Like the chubby friend who promises to lose weight in the new year but doesn’t want to start eating vegetables, the Coalition and Labor are fiddling about on the edges of reform without wanting to deal with any of the main issues that drive people’s discontent with capital P politics.”

Critics desperate to carp at ABCC — John Lloyd (The Australian $): “The ABCC in its previous form was effective because it operated under a succinct, well-drafted act, was accessible and was resilient in its administration of the law. The reconstituted ABCC will operate in the same vein.”

Andrey Karlov, the Russian ambassador to Turkey, has been shot dead at an Ankara photo gallery. His murderer is reported to be a policeman. Russian Foreign Ministry spokeswoman Maria Zakharova said: “We regard this as a terrorist act.” The foreign and defence ministers of Russia, Iran, and Turkey had been set to meet this week to discuss the future of Syria and Aleppo. — CNN/The Independent

The head of the International Monetary Fund, Christine Lagarde, has been convicted of negligence by a French court. The court found Lagarde should have done more to prevent a payout of 285 million euros to a businessman while she was French finance minister almost a decade ago. Despite the finding, Lagarde will not face either a fine or jail time. — Bloomberg

A political crisis is threatening to plunge the Democratic Republic of Congo back into violence, with President Joseph Kabila refusing to step down. The country’s constitution limits a president to two terms, but Kabila appears set on holding the position with just hours to go until his second term expires. Opposition groups are planning significant demonstrations. — The Guardian

Former NSW Premier Nathan Rees speaks about his take on jailed powerbroker Eddie Obeid (The Daily Telegraph $): “They wielded their power by creating a sense of debt, that you owed them. The way they operated if they wanted to get you to do something was to create artificial obstacles that they would then fix. It was like: ‘Listen, there’s a bit of carpet sticking up outside your office. You could have tripped. We’ve fixed it for you.’”

In Poland, a window on what happens when populists come to power (The Washington Post): “Yet nothing has shocked liberals more than this: After a year in power, Law and Justice is still by far the most popular political party in Poland. It rides atop opinion polls at roughly 36 percent — more than double the popularity of the ousted Civic Platform party.”

Men explain Lolita to me (Literary Hub): “But ‘to read Lolita and “identify” with one of the characters is to entirely misunderstand Nabokov’ said one of my less friendly readers. I thought that was funny, so I posted it on Facebook, and a nice liberal man came along and explained to me this book was actually an allegory as though I hadn’t thought of that yet. It is, and it’s also a novel about a big old guy violating a spindly child over and over and over. Then she weeps.”