Ross “the Cap” Cameron has been having a middling few weeks. His new Sky show The Andropause Hour*, with explosion-in-a-woolshed Rowan Dean and celebrity monorchid Mark Latham has so few viewers that they could go round to people’s houses and do it in their living rooms; the NSW Liberal Party is looking to suspend him for forthright criticism of the party apparatus; and he (and other rightists such as Rita Panahi) have been fulsome in their praise of a viral video of Canadian journalist Eva Bartlett, pulling apart a loaded, “failure of the world” question about the siege of East Aleppo from a Norwegian hipster journalist. Fair enough, but Bartlett is a pro-Assad regime advocate (and openly so) — in the video she describes Assad’s takeover of the city as its “liberation”. Nice to know the NSW Liberals have a pro-Assad faction.

Where The Cap may part company with even the most deranged of his colleagues is in his renewed support for Barack Obama ‘birtherism”. Yes, the Cap is jumping on the bandwagon as everyone is scrambling off, taking time at 2.27 on Monday morning to inform us … 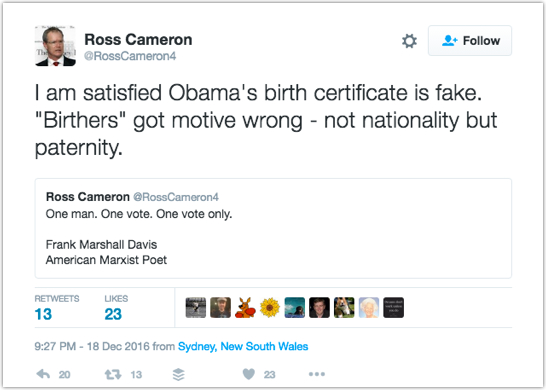 What the …? Well, this is birtherism 2.0, which has been running for a while now. The rejigged craziness is that yes, Barack Obama was born in Hawaii, not Kenya, but his real father was not Kenyan exchange student Barack Obama Snr, but Frank Marshall Davis, an important African-American journalist and poet who had moved to Hawaii in the late 1940s. Davis was a friend of Obama’s granddad, and he became a mentor of sorts to Obama during his teen years, when he was living with his grandparents and attending high school in Hawaii.

He’s of interest to the Deranged Right because he was for a time a member of the Communist Party of the USA. In birther theory 2.0, as aired in the 2012 film, Dreams From My Real Father, Obama’s 18 year-old-mother Ann Dunham was impregnated by Davis during porno/fetish photo sessions they were conducting together, the scheming Dunham then having an affair with Obama Snr, and marrying him, to cover her tracks.

There is not the slightest evidence for any of this, and two previous works by the film’s director Joel Gilbert, Elvis Found Alive, and Paul McCartney Really Is Dead, give you an idea of his approach. The fantasy has been brought back to life by the “investigation” of recently deposed, and also convicted (of contempt of court) Phoenix sheriff Joe Arpaio, who held a press conference with a blow-up of the full long-form birth certificate that was released in 2011, after a birther 1.0 campaign by Donald Trump. Boy, he really paid for that folly. The sheriff’s ‘proof’ that the long form is a forgery is an adaptation of a bogus analysis put around by the uber-birther, Florida lawyer and dentist Orly Taitz, that the long-form image circulated is a photoshop mock-up, consisting of multiple ‘layers’.

Birther 2.0, hasn’t become popular until recently, because it didn’t bar Obama from the presidency. It’s a last attempt to render him as illegitimate, an alien spirit. The earlier notion had been that Marshall Davis’ mentorship had turned Obama into an undercover agent — disguising his true Black Marxist politics as he rose through the establishment to the White House. But that is too conventional for the paranoid right in these times. They need a recrudesced version in which the Communist taint is passed on through the blood (and the demon seed of infidelity at that).

How do such crackpot theories gain the support of so many deluded clowns? Let’s ask one expert: 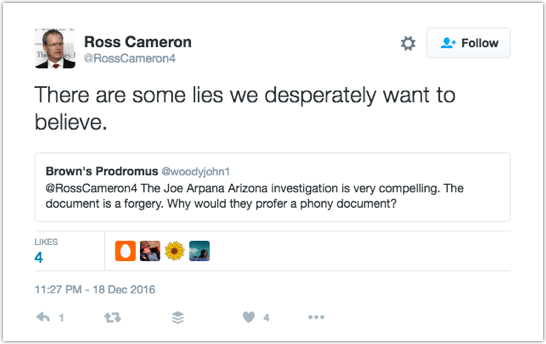 DIY news? All you need are the tools – and they don’t come much more ‘tooled up’ than this Far Right Flapper rump.

Of what value is it to deride Obama in his last days? The USA didn’t become a communist nation under his auspices nor did Muslims run the Pentagon. Nothing terrible happened apart from the usual crap – Obama didn’t even close Gitmo (as promised).

Cameron, Dean & Latham: a trio of trolls. You say they have a TV show – c’mon, Rundle, you old jester, it’s just not possible.

Left-baiting is about the only mental stimulation “Moe” Ross, “Larry” Dean and “Curly” Latham get.

Only one of this unholy trio, apparently, is monorchid but they are all monocular and, like the Borg, share a single brain – and a pretty dodgy one at that.

A superb Rundle take-down of loony Ross, except for the first part. So Eva Bartlett as a pro-Assad journalist? And? Her taking a different line to the fashionable one among the rest of the western media does not make her wrong. The ‘fall’ of Aleppo is a liberation as far as that side of the civil war is concerned. The Assad government is the legitimate government of Syria and why shouldn’t they want to take back a major city? That view is not on the left- right spectrum.

LOL Well “The Andropause Hour” mightn’t be an actual show name Guy. But I’m betting the Bolter is wishing *he’d* thought of it.