MYEFO’s coal in the stocking not enough to save ScoMo

MYEFO shows budget got $10 billion worse, but not all is lost, yet.

A spike in resource prices has failed to make up for declining wages and tax receipts in the Mid-Year Economic and Fiscal Outlook (MYEFO), causing a $10 billion blowout in the budget deficit, but the government is still claiming the budget will be back in the black by 2020-21.

The underlying cash deficit this financial year is $37.1 billion, compared to the $36.5 billion forecast in the Pre-Election Economic and Fiscal Outlook, but over the four years in the forward estimates, the deficit is getting worse in total by $10 billion from $84.9 billion to $94.9 billion, compared to the PEFO predictions. The biggest blowout comes in 2018-19, when the deficit will blow out from the projected $15.4 billion to $19.7 billion in that year.

Government payments are down as a share of GDP since PEFO from 25.8% down to 25.2%. The government has predicted there will be a massive decline in government receipts through softer domestic prices and wages growth, down $3.7 billion this financial year, and a total $30.7 billion over the four years to 2019-20.

Higher iron ore and coal prices have helped save some of that loss, but the government has decided against adopting the current prices in its forecast. 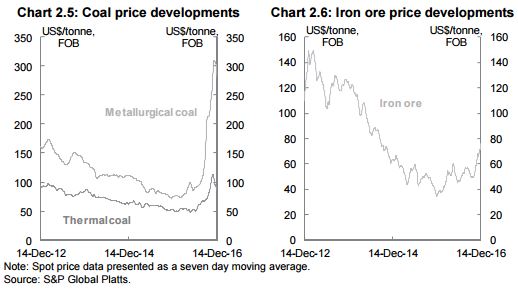 The government has decided that there is too much sensitivity in coal and iron ore prices, which are now a third higher than forecast in PEFO — Treasurer Scott Morrison pointed out that some had called the iron ore predictions in PEFO “heroic assumptions” at the time. The government is taking a conservative approach and assuming the higher prices are unlikely to be maintained, with iron ore pricing forecast to go down to US$55 per tonne by September next year, and coal at US$62 per tonne overall.

The downgrade was not as bad as expected, which led the government to suggest Australia’s AAA credit rating might not go this week, but the Coalition is now putting pressure on the Senate crossbench to pass more legislation to improve the budget bottom line.

New drinking game. Take a swipe everytime Scott Morrison blames Labor for something.
Good thing I live above a bottleshop.

Considering the rules of the game and ScrotMo’s past form I have grave fears for your liver !

The Coalition have a mysterious blanket which they clutch to them as if it was concealing their nakedness. It’s called the triple ‘A’ credit rating, and it fools few members of the electorate.

ScoMo: “Oh no! Budget deficit predictions are up because tax receipts from salary growth are down. Our AAA credit rating is at risk. What to do? What to do – so that I too may earn the accolade of ‘World’s Greatest Treasurer’ like that bastard Swannie?”

Chorus of Idiots (aka NewsCorp, IPA, BCA and other assorted morons): “That’s obvious, Numbnuts! Drive salaries down further! Make Australians poorer and reduce government investment in the economy … and while you’re at it kick those unemployed mongrels a couple more times for us!”

ScoMo: “Ah yes! A light shines in the dark at last … all praise, o Masters of Wisdom!”

If only you were joking. Sadly, the scene you’ve described is all too real.

I once advocating “Eat the Rich” but they are so toxic now that I wouldn’t even compost them.

How dare you, sir!