Good morning, early birds. Today we will discover just how screwed the Australian economy is, with the mid-year budget update out at lunchtime. Plus Rod Culleton goes it alone, and news of an affair (and a payout) has rocked Channel Seven. It's the news you need to know, with Cassidy Knowlton and Max Chalmers.

Today the Mid-Year Economic and Fiscal Outlook figures will be released, normally a mini-Christmas for economists and policy wonks but today predicted to be like that dystopian future Christmas shown to Ebenezer Scrooge, where (spoiler alert) Tiny Tim has died. David Crowe and David Uren write in The Australian that deficits are expected to reach $100 billion in the next four years, meaning ScoMo’s much-touted 2021 return to surplus was probably not a “core promise”. Yes, commodity prices have risen lately (including for the all-important iron ore), but it won’t be enough to counter the effects of low wage growth and weak company profits. The questions everyone wants to know is: Will the ratings agencies use the disastrous MYEFO results to downgrade Australia’s precious AAA rating? A government source told the Fin that would be a “ballsy move”, but that does not mean it won’t happen. The last time Australia lost its top rating was in 1986, during Paul Keating’s “banana republic”. You will remember that was followed by the recession we had to have, and with economic growth in serious negative territory, it could be time to dust off those legwarmers, as we’re going back to the ’80s and ’90s.

YOU’RE NOT THE BOSS OF ME

In a move that will surprise precisely no one, Rod Culleton has called it quits with One Nation and is going it alone. He announced the move on Twitter last night. 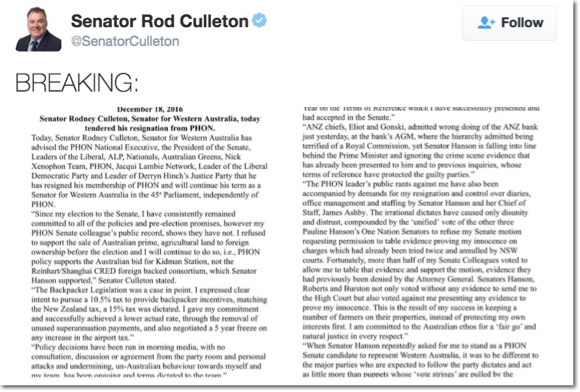 Culleton and party leader Pauline Hanson have been trading barbs in the media for a while (including Hanson’s famous “Excuse me, Rod, I’m party leader” ABC interview), and he has voted against his One Nation colleagues on some key legislation. “I would have thought it reasonable to expect some measure of support or, at the very least, some discretion and respect from the party leader and my party colleagues –  there has been none’,” Culleton said in his breakup statement. But here’s where it gets interesting. If Culleton is found to have been ineligible to have run for the Senate in the first place, due to a since-annulled conviction, who will replace him? Hanson could be forced to pick the next person down on the One Nation ticket: Culleton’s brother-in-law, Peter Georgiou. Now that he’s not part of One Nation, though, that is up in the air.

Speaking of One Nation, the party says it will run 36 candidates at next year’s Queensland election, which Hanson thinks will be held in February. Polling shows One Nation running at 16% in the state.

Channel Seven is in a whole mess of trouble after a consensual extramarital affair between CEO Tim Worner and a 35-year-old personal assistant went public. The former assistant, Amber Harrison, says an investigation into her use of the company credit card was in retaliation. Keep an eye out for more detail in today’s Crikey Insider.

“How can you breach him for breaking the media rules when no one watches Sky News? You can’t call it media.” — an anonymous defender of hotheaded former Liberal MP (now Sky News host/guest/perennial) Ross Cameron. The Liberal Party is considering  suspending Cameron from the party for five years for raking NSW Liberal Treasurer Gladys Berejiklian over the coals on live TV. If Ross Cameron takes leave of his senses entirely on TV but there’s no one there to see it. …

All sides are to blame for the inevitable credit rating downgrade — David Crowe (The Australian, $): “Consider the ­reality: budget deficits added up to $191bn during Labor’s most recent years in power; they will rise to $210bn under the Coalition by 2020, and probably more after today’s midyear update. The debt is a shared calamity. The downgrade damns all sides.”

Wesfarmers stonewalled on push for $1 pokies — Adele Ferguson (Australian Financial Review, $): “The decision by Coles to take the bold step and go public on its push for $1 limits on pokies will put the highly profitable $11.6 billion poker machine industry high on the political agenda in 2017.”

MYEFO will show Australia becoming a banana republic unless we reform — Tony Shepherd (The Australian Financial Review, $): “The government’s financial position is often considered as an abstract thing. It is not. Its health goes to the very sustainability of hospitals and schools. It goes to the sustainability of welfare and pensions.”

Australian expats should be allowed to vote here, no matter how long they’ve been away — George Williams (The Sydney Morning Herald): “The vote is also denied to citizens intending to live overseas for more than six years. This rule was imposed decades ago on the basis that a person living overseas cannot keep in touch with local issues, and so should not be allowed to vote. This reasoning is now redundant.”

Give every child the chance to hit the heights with a great education — Chloe Shorten (Herald Sun, $): “Inequality is when a small group of society controls most of the wealth, resources and opportunities that are available. It means people who aren’t as wealthy have fewer chances to build better lives for themselves and their children.”

China will return an underwater US drone captured in the South China Sea. The US made a formal diplomatic complaint after China plucked the unmanned underwater vehicle from international waters off the coast of the Philippines. The Pentagon said the drone was conducting scientific research, while China criticised the US for “hyping up” the incident. — BBC

The Venezuelan government has delayed the removal of the country’s largest-denomination bill after a panic. The country is suffering crippling inflation, and a batch of new, higher-value bills are yet to arrive. Socialist President Nicolas Maduro blamed foreign “sabotage” for the lateness of the bills’ arrival. — Reuters

The Islamic State group has claimed responsibility for a suicide bombing that killed at least 49 police officers and soldiers in Yemen. A Shiite insurgency led by Houthi rebels has crippled the Yemeni government, with the instability allowing groups like IS to gain a foothold in the country. Another IS attack in Aden last week killed more than 50 soldiers. — Washington Post

Zimbabwean President Robert Mugabe has been endorsed by the ruling Zanu-PF party to run as its candidate in the country’s 2018 election. Now 92, Mugabe has ruled the African nation since its independence in the 1980s. — The Guardian]

The Rise of the Alt-Center: Why did establishment liberals fall in love with a deranged Twitter thread? It’s time for some game theory (Slate): They won’t accept that Trumpism is America, in all its blood-splattered horror—that the dry civics lesson of a democracy they love so much is capable of creating a monster.”

On Optimism and Despair (The New York Review of Books): “They are like complex musical scores from which certain melodies can be teased out and others ignored or suppressed, depending, at least in part, on who is doing the conducting. At this moment, all over the world—and most recently in America—the conductors standing in front of this human orchestra have only the meanest and most banal melodies in mind.”