“I like to think of it as more of a Trojan Horse than a hoax -- essentially because I dressed up an attack in a very pretty package and let the reporters take the bait.” Freelance journalist Harrison Johnstone reports.

A Reddit user whose story of dramatically finding out her fiance was actually her half-brother went viral yesterday has taken the whole thing back, saying it was a hoax designed to expose how the media shamelessly rips and repurposes anonymous Reddit posts with no attempts at verification.

Outlets to pick up Reddit user Oopscest’s post yesterday included news.com.au (from where it was republished on the Herald Sun), the Daily Mail, Cosmopolitan and UPROXX.

In the original, since-deleted post, Oopscest elaborated on her relationship: its humble beginnings, their dysfunctional upbringing and that their wedding is to take place in six weeks — only to find that the fathers they’d grown up with and without were one and the same.

“I’m betrayed. I’m disgusted. I’m hurt. I’m ashamed. I’m heartbroken. I don’t know what to do. I’ve invested so much money into this wedding and much of it is non-refundable,” the original post stated.

That was enough for many outlets to make into a story, quoting extensively from the detailed and well-written account, even though it was posted anonymously on the social network. 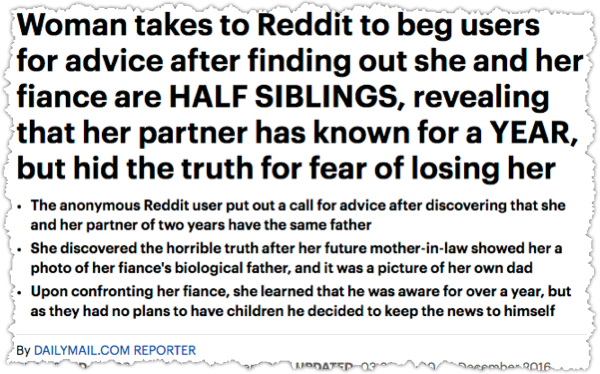 This morning, Oopscest took to the journalism section of Reddit to proclaim the whole thing was a “Trojan horse” intended to fool the media, in a widely read post called “How I Pretended to Bang My Brother & Exposed Several Unethical Journalists in the Process”.

In today’s post, Oopscest specifically calls out Cosmopolitan’s Tess Koman, who the Redditor claims did not reach out for comment; despite claiming she did in her article. This morning, Cosmopolitan had updated Koman’s piece, while UPROXXX has entirely deleted its.

In a private message through Reddit, Oopscest (who did not reveal his or her real name) told Crikey the hoax story was intended to show people how important it was to “QUESTION EVERYTHING you read on the internet”, even if it comes through mainstream media sources.

“I like to think of it as more of a Trojan Horse than a hoax — essentially because I dressed up an attack in a very pretty package and let the reporters take the bait,” Oopscest told Crikey.

“I did this … to show how very, very easy it is to craft a story that is reported by mainstream news outlets as true.”

“Over the last several months, I’ve seen stories being ripped directly from text posts on the site and presented as facts. This started with AskReddit threads being used in Top 10 Lists; but has progressed to reporters searching out support-based subreddits to sensationalize the stories of people seeking help.”

Oopscrest’s original post was removed by Reddit moderators, one of whom said that “it shouldn’t escape you that actions like this, in high drama and publicity, do damage to the community and Reddit overall”.

Responses to Oopscest revealing the post to be an allegorical hoax were resoundingly negative, with many users felt betrayed by the improper use of the platform, which they argue is intended to provide support and women’s perspectives.

Crikey contacted to news.com.au, Cosmopolitan, and UPROXX for comment, but received no response by deadline.

“it shouldn’t escape you that actions like this, in high drama and publicity, do damage to the community and Reddit overall”. Ha, ha, ha. If they any respect for their brand, let alone the community, they would do some background research. That they didn’t, tells you everything you need to know. Its all bullshit.

Soooo… Reddit thinks that only ‘real’ stories should be posted by ‘authentic people’? Grow up boys and girls, hoaxes and wet dreams and inauthentic individuals and groups abound online. Yikes!