‘An exercise in futility’: mullet defamation case plaintiff saddled with costs after losing on all counts

The teenager who brought a defamation lawsuit against major news organisations after they published photos of his mullet hairstyle has lost on all counts. 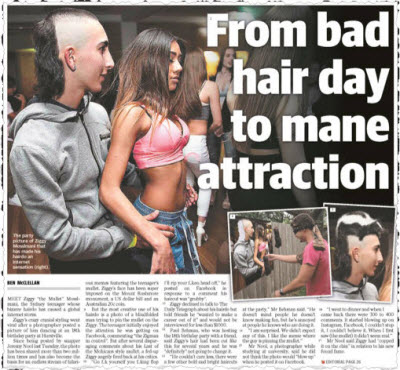 A Sydney teenager who sued a host of media outlets for defamation after they reported on his unusual hairstyle has lost his case on all counts.

Ali “Ziggi” Mosslmani became a sudden internet celebrity when a photo of him at a party went viral online, leading to widespread media attention. Mosslmani’s lawyers argued the stories made him out to be “a joke”, “stupid”, and “by reason of his mullet hairstyle, has justifiably exposed himself to ridicule”.

A ruling delivered yesterday in the NSW District Court found the imputations complained of — in the Daily Mail, the Daily telegraph and on the Australian Radio Network — could not be reasonably conveyed by the stories published. Mosslmani has been ordered to pay the costs of all three defendants, who had hired some of the nation’s top silks to defend themselves.

In one of the pieces, Mosslmani was pictured next to a donkey, with the caption “pin the tail on the mullet”, a reference he alleged conveyed him as stupid. Gibson described this line of argument as an “exercise in futility”:

“To attempt to draw an imputation of stupidity from one or more of these when they are all humorous adaptations of the plaintiff’s hairstyles with no deeper meaning is an exercise in futility, and no imputation to the effect of that pleaded by the plaintiff is reasonably capable of being conveyed. I am satisfied that each time the word ‘mullet’ appears it relates to the plaintiff’s hairstyle, and that the only play on words for another meaning of ‘mullet’ is the ‘stunned mullet’, which refers to the complete surprise the plaintiff felt at his unlooked-for international fame.”

Gibson also disagreed that the piece in the Daily Telegraph conveyed the imputation that Mosslmani “deserves to be an object of ridicule because of his mullet hairstyle”:

“I agree with … submissions that the whole tenor of the matter complained of is that, to use the actual words of the publication, the plaintiff had become an ‘internet sensation’ because of his ‘hair-larious’ mullet hairstyle, which had resulted in ‘hilarious memes’ and that the plaintiff’s friends (and, by inference, the plaintiff, although he said he ‘couldn’t care less’) were ‘loving the attention’. The highest that the matter complained of could be put is that the plaintiff’s hairstyle had provoked a sensational internet response, including humorous memes, a meaning which Mr Rasmussen acknowledged could not amount to a defamatory act or condition because it was so trivial as to have no defamatory content.”

At an earlier hearing, Gibson had remarked that “one hears talk of ‘the Streisand effect’ and that is very much the case”. The case has been widely reported on. Mosslmani’s barrister also previously told the court that Mosslmani, now 18, was being home-schooled after his school asked him to leave on account of the publicity around the case. — Myriam Robin

If you go about looking like this, I don’t think you can complain too much, but mullet schmullet. I never saw mullets like this. His lawyers should be just about struck off for the poor advice. The article might have said person shows off but looks stupid in complete truth. As for being asked to leave his school, must be some posh private one, because you cannot be removed from a state school in NSW for such a reason.

It’s rare to see a bloke mug himself so thoroughly. At least his actions now demonstrate that which his barnet imputed.