No one watching the watchmen. While George Brandis was quick to replace solicitor-general Justin Gleeson with Stephen Donaghue yesterday, many are wondering when the Attorney-General will get around to replacing his independent national security legislation monitor (INSLM). It almost went unreported outside of legal circles that Roger Gyles, appointed to the job in August last year, resigned mysteriously from the role in October.

It was so quiet that journalists are still referring to him as the current INSLM.

The website for the INSLM states that the government “intends to announce” his replacement “in the near future”. In the meantime, it seems we are without anyone to monitor all the national security legislation the Abbott-Turnbull government has passed in the past few years. That is how the government would have liked it, though. It was intended that the INSLM would be shut down, but that decision was reversed in order to get Labor’s support for national security legislation.

The office has not been adequately funded, however. In Gyles’ last annual report to the government in October shortly before he retired, he lamented the workload for what was a part-time position.

“None of the topics of review are trivial and all require the balancing of security against individual and community rights and freedoms. Completion of such a program in an acceptable timeframe will require more support than is presently available,” he said.

He was given some staff to help ease the workload, but he noted there were still issues, something his replacement will now have to deal with:

“More work is needed in conjunction with the Attorney–General and the Department of the Prime Minister and Cabinet to develop the office of the INSLM to the point where it has the capacity to satisfactorily support the Monitor in carrying out the statutory duties and functions of the Monitor. An effective ongoing office is also necessary to ensure the seamless departure of one Monitor, and replacement with another so as to avoid the administrative problems that I encountered after my appointment.”

Midsumma bows to leather group pressure over News Corp money. The Midsumma Festival has decided to end its sponsorship deal with News Corp, bowing to community pressure. The Victorian community group for people interested in leather fetishism was one of two organisations to pull out of the Midsumma Carnival over the sponsorship deal. As reported in Crikey, the festival, which celebrates the queer community in Melbourne, consulted with members over the sponsorship deal, but it had, until this morning, decided to maintain the partnership. News Corp was a “gold sponsor” of the month-long festival, but after months of sustained attacks on the Safe Schools program and columnists writing about the “rainbow agenda”, some in the LGBTIQ community thought the festival shouldn’t accept money from Rupert Murdoch’s Australian media company. VicLeather sent a newsletter to its members yesterday saying that the group would not be holding a stall at the Midsumma Carnival. “After the way News Corp publications have attacked the Safe Schools program and other parts of the LGBTQIA+ Community in articles and commentary in the Herald Sun and other Leader publications, the standing Committee does not believe that we should be contributing money to Midsumma for 2017,” the newsletter read.

The group will march in the annual Pride March, though, which is also part of the Midsumma festival. “We are proud to wear our Leather, We are proud to create safe space for our leather community members to march with us, as Pride March is a celebration and is a political act in and of itself.”

Judging by the way cartoonist Bill Leak has illustrated his cartoons about the Safe Schools program, it is not surprising that VicLeather has decided the sponsorship isn’t for them. 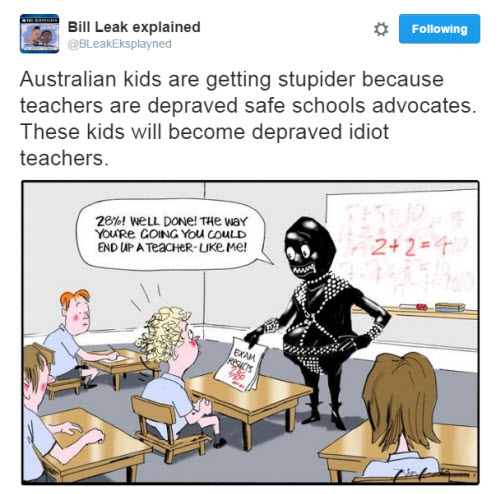 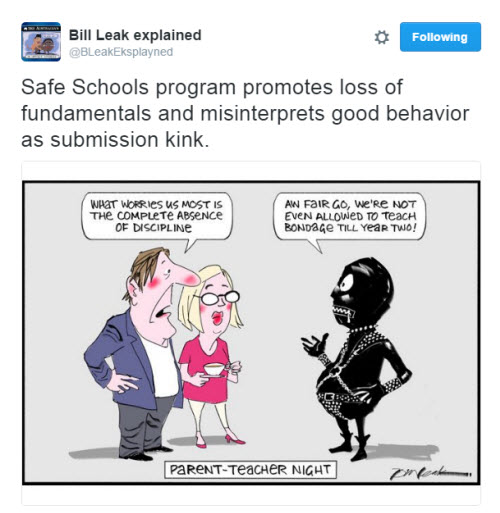 Liberal Party ‘woman problem’ rears its ugly head in Boroondara. The Victorian Liberals have long struggled to get women into Parliament, and the perception of male dominance is continuing within the boundaries of Josh Frydenberg’s seat of Kooyong. The women of Boroondara in Melbourne’s leafy suburbs are issuing a call to action after the most Liberal-dominated local council in Victoria on Monday voted to pull the rug out from under popular Municipal Association of Victoria president Coral Ross.

Ross, a well respected independent, was elected acting president of the MAV after long-serving president Bill McArthur was ejected by his local constituents in the Shire of Golden Plains at Victoria’s statewide council elections in October.

The MAV is one of the last bastions of male dominance in Victorian politics. Formed in 1878 by an act of Parliament, it has never had a female president elected for a full term.

Ross is the third female acting president who has taken over from a bloke who failed to finish his term and was in the box seat to make history by being elected by the 79 member councils to be president for a full two-year term at the upcoming elections in February.

Alas, her Boroondara colleagues have just voted in a confidential session on Monday night “not to appoint a representative to the Municipal Association of Victoria”, which means the incumbent president won’t even be able to run.

The hand of young turk hard right state Liberal Member for Hawthorn Tim Smith has been seen influencing decision, despite lobbying from a range of people, including his boss, state opposition leader Matthew Guy.

Local Government Minister Natalie Hutchins is also not amused, and pressure is already being brought to bear to call a special council meeting to reverse the decision.

Liberal mayor Philip Healy has the power to call such a meeting, as do any three of these 10 councillors. Watch this space.

The right’s shining stars. It’s awards season (ours are here), and the Australian Taxpayers Alliance is also getting in on the action with its Champions of Liberty Awards, which recognise the most influential centre-right think tank, centre-right blog and “the most solid advocate for sound public policy in the Federal Parliament backbench/crossbench”. No, we are not joking. (Also, “centre-right” is their term; we think they are probably full-blown “right”.) In the think tank category, you can take your pick of the HR Nicholls Society, the Centre for Independent Studies and the Institute of Public Affairs among others. Ms Tips wonders how all the other News Corp columnists are feeling, as the short list for “most influential centre right writer” only includes Miranda Devine, Rita Panahi, Janet Albrechtsen and Andrew Bolt. Chris Kenny must be so disappointed. In the federal Parliament category, voters can choose from One Nation’s Malcolm Roberts, George Christensen, Cory Bernardi, David Leyonhjelm, Craig Kelly, Tim Wilson or James Paterson. For some reason, those on the frontbench or in the opposition are not worthy of inclusion. Despite his helpful policy contributions, Tony Abbott didn’t make the cut. The Australian Taxpayers Alliance is run by Tim Andrews and purports to represent taxpayers who want lower government spending.