Good morning, early birds. There's still no good news on the economy, the Syrian ceasefire has broken, and we now know how John Podesta's emails were hacked. It's the news you need to know, by Sally Whyte and Max Chalmers.

NO LITTLE RAY OF ECONOMIC SUNSHINE

We’ve been looking for an optimistic headline about the Australian economy, but a study shows that Australians are taking a decidedly negative outlook. A monthly Westpac-Melbourne Institute survey shows that consumer confidence has dropped from 101.3 to 97.3 (a score of 100 means a balance between optimists and pessimists). The Australian Financial Review is reporting that our AAA rating “could go at any time“, even as soon as Monday afternoon after the government’s mid-year budget update. The ABC is reporting finance experts have criticised comments made by Treasurer Scott Morrison yesterday, when he said households with large amounts of debt could take comfort from increasing asset prices like house prices. “The reality is that firstly, if house prices are elevated because of debt, there should be no comfort in the price of a house — it’s elevated simply because of the debt,” investment expert Roger Montgomery said.

Meanwhile, the Federal Reserve Bank in the United States has raised interest rates by a quarter point, in line with expectations, after mostly positive economic reports.

Former prime minister Tony Abbott has continued to offer helpful advice to his colleagues, telling 2GB’s Ray Hadley it was good the government was cracking down on people claiming the disability pension. “We were far too ready to put people on the Disability Support Pension with bad backs and a bit of depression and so on,” he said. Abbott has made a habit of offering his opinions on Malcolm Turnbull‘s government policies in the past year.

The number Australians accessing homelessness service has risen, according to a report by the Australian Institute of Health and Welfare. More than 279,000 people accessed services in 2015-16, with 106,000 of those seeking help due to domestic violence. In the previous year, nearly 256,000 people accessed homelessness services. AIHW spokesperson Anna Ritson told the ABC the rise did not necessarily represent an increase in homelessness or domestic violence, but a a rise in awareness, meaning people were more willing to seek help.

OUT WITH THE OLD, IN WITH THE DONAHUE

Attorney-General George Brandis has appointed Stephen Donaghue as Australia’s new solicitor-general, with the constitutional lawyer to replace former solicitor-general Justin Gleeson. Donaghue, who is a Melbourne-based lawyer, will begin a five-year term in the role on January 16. Gleeson resigned from the role seven weeks ago, after his relationship with Brandis broke down. What does the solicitor-general do anyway? Your answer is here.

Unemployment Figures for November will be released by the Australian Bureau of Statistics today.

Sydney: The two-year anniversary of the Lindt Cafe siege will be commemorated today, with a public memorial service at St Stephen’s Uniting Church. The partner of Tori Johnston, one of two people killed in the attack by Man Haron Monis, told the Daily Telegraph he still expects him to walk in the door.

Sydney: Former NSW MP Eddie Obeid is due to be sentenced over misconduct relating to Circular Quay cafe leases today, and as the Sydney Morning Herald‘s Kate McClymont writes, he must now face his own “unpleasant reality“.

Brisbane: The inquest into the death of Daniel Morcombe continues today. Yesterday it heard police officers said Brett Peter Cowan was an early suspect in the 13-year-old boy’s disappearance.

Brisbane: The first of three Tests between Australia and Pakistan begins today at the Gabba. The pay dispute between Cricket Australia and the Australian Cricketers Association continues as well, with The Australian‘s Peter Lalor reporting Australian female cricketers are currently required to prove they aren’t pregnant when signing playing contracts.

Don’t blame the ‘political class’: we the people are at fault — Matthew Laing (The Australian $): “Supposedly, Australians are looking for politicians who are honest and tell it like it is. But we end up voting for the politicians who sell us one-liners and silver bullets, while politicians who try to tell a nuanced story are left behind in the dust.”

Common sense from the centre will win the day — Warren Mundine (Herald Sun $): “I believe the first centrist politician who embraces common sense and plain speaking, ignoring the noise of the political class and dealing honestly and firmly with issues most Australians care about, will dominate the ballot box.”

Science shows that social media is good for you … until it isn’t — Peggy Kern (The Age): “I was surprised to find that in many of the studies, social media users reported being happier and more connected to other people. In fact, if you struggle with social anxiety, social media can provide a way to get support, without the stress of face-to-face interactions.” 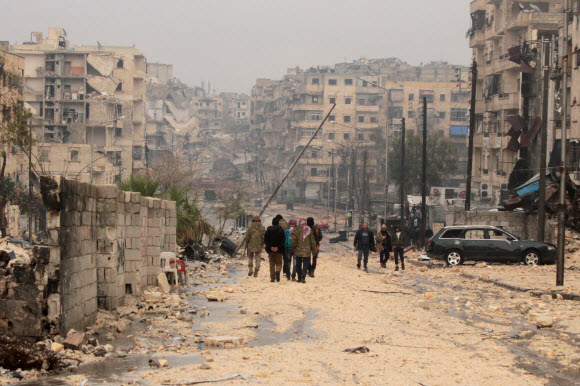 The UN’s High Commissioner for Human Rights has issued a statement that says the bombing of Aleppo by the Syrian government is “almost certainly a violation of international law and most likely constitutes war crimes”. The Syrian government resumed bombing of the last portion of the city held by rebels after a ceasefire broke down. — Reuters

Philippine President Rodrigo Duterte has admitted to personally murdering alleged criminals in an extrajudicial killing. Duterte’s drug war has claimed the lives of as many as 6000 alleged criminals and drug users killed by police and vigilantes. Now the President has said that during his time as mayor of Davao he would ride around on a motorcycle and look for confrontations as a pretext to kill. “In Davao I used to do it personally. Just to show to the guys [police] that if I can do it why can’t you,” he said. — BBC

Russian operatives were able to “hack” the emails of Hillary Clinton’s campaign chairman John Podesta thanks to a typo. Hackers got into Podesta’s email using what is known as a phishing scam, whereby an email account holder is fooled into clicking on an external link that compromises their security. Podesta clicked on such a link after being told it was “legitimate” by an advisor who had meant to type “illegitimate”. — The Guardian

Aleppo is the mass murder we know everything about – and will do nothing to stop (New Statesman): “We live in a world that can read instant messages from a warzone (imagine if Londoners in 1940 were live-tweeting the Blitz). And yet that same world does not seem to have figured out what to do about this information. We know what is happening to these people, and we can guess at the fate that awaits them.”

Hollywood Officially Pardons Mel Gibson. For Shame. (Daily Beast): “Beginning with The Passion of the Christ, Gibson has been cast as a sort of Trumpian figure—a lone wolf, condemned by the politically correct media, voicing the (bad) opinions that people are generally reticent to share on the record … The fact that some people actually agreed with the director’s vitriol makes his refusal to further rescind those comments even more deplorable. ”

My president was black (The Atlantic): “Against the specter of black pathology, against the narrow images of welfare moms and deadbeat dads, his time in the White House had been an eight-year showcase of a healthy and successful black family spanning three generations, with two dogs to boot. In short, he became a symbol of black people’s everyday, extraordinary Americanness.”