Crikey‘s nominations for the sexiest politicians of 2016 has had quite the reaction this year, with many MPs commenting on their place (or otherwise) on the shortlist. Senator James Paterson posted on Facebook that he was flattered by the nomination, but his vote was with his Western Australian colleague Andrew Hastie. Greens Senator Sarah Hanson-Young seemed lost for words on Sky News yesterday when asked about her place on the shortlist, but she did encourage people to vote (we do too). We are surprised at her surprise — Hanson-Young has polled well in previous years. 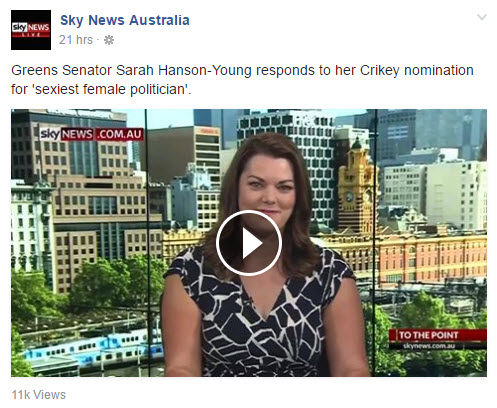 “Politics is show business for ugly people, and it’s not hard to get nominated, to be honest,” Hanson-Young told Kristina Keneally and Tom Connell.

The annual poll goes back to 2005 (as far as we can tell), and we’ve trawled previous years winners and found that Julie Bishop won in 2006 and is still polling respectably 10 years later.

Ms Tips would like to remind readers that sexiness isn’t all about looks, either — Malcolm Turnbull lost his spot on top of the list after becoming communications minister. It seems as if once he started enacting policies people didn’t like, they went cold on him.

Voting on the list is open until next Wednesday, and we remind you that if your favourite MP or your preferred arsehat or person of the year aren’t shortlisted, there is the opportunity to add them.

Crikey Awards 2020: A lament for ScoMo and a win for the king of Danistan

Arsehat of the Year update: in praise of the also-rans