Sam Armytage's lawyer says speculation about her underwear breaches her reasonable expectation of privacy. If a judge agrees, it could forever change the business of paparazzi photography.

Lawyers acting for Sunrise host Sam Armytage, about whose underwear the Daily Mail has caused quite a stir, on Monday sent a legal letter to the Daily Mail Australia and one of its reporters demanding the publication apologise and remove a post about her of wearing “granny undies”. The letter gave a deadline of 5pm yesterday, after which “Armytage will take your response into account when considering the legal options next available to her”.

The post was based on pictures of her in a sundress, doing some grocery shopping with a crease in the back of her dress. Armytage’s legal letter, first revealed in the Daily Tele today, where it was incorrectly reported as a defamation threat, states that Armytage is at a loss “to understand the reasons why Daily Mail Australia has chosen to publish this article, which represents a gross invasion of her privacy”. This view, argued Justine Munsie, a partner at Seven’s law firm Addisons, “is widely shared”:

“Ms Armytage accepts that she is a public figure and it follow that she is subjected to a great deal of media attention, including by way of rumour and innuendo, such as the misinformation as to whom she is ‘dating’ which is also referred to in the article.”

“[But she] retains a reasonable expectation that intimate, private information which is not known by and is of no interest to any other person would not be the subject of media exposure and comment …

“The publication of the article constitutes an indefensible breach of privacy which a court is likely to recognise and in relation to which it would order compensation be paid to Armytage for the hurt, distress and humiliation which the publication has caused.” 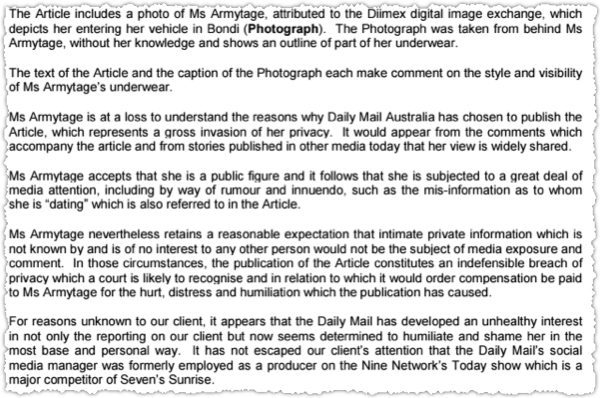 An extract from the legal letter sent to the Daily Mail

Australia, as any journo will perhaps gleefully tell you, has no statutory right of privacy. High-profile Australians — recent examples include Barry Spurr and Gina Rinehart — have for decades been trying to get one properly established, with little luck. The High Court has yet to consider a case on the issue.

But Peter Clarke, a Melbourne barrister and board member at the Australian Privacy Foundation, says that doesn’t mean Armytage has no legal chance.

In the UK, model Naomi Campbell sued for misuse of private information after a paparazzo photographed her exiting a meeting of Narcotics Anonymous. The British High Court interpreted that this was a misuse of confidential information that Campbell had a reasonable expectation would be kept private, broadening the UK’s privacy tort. Lower courts in Australia have referred to this ruling, establishing its legal validity in Australia. “It’s clunky,” Clarke admitted. “There is a course of action, but it’s hard.” Plaintiffs often seek to add other factors into the mix, like defamation, or trespass on private property (it’s much harder to argue privacy for photos taken on a public street).

Daily Mail Australia hasn’t commented on the Armytage case. Yesterday afternoon, however, the website did significantly amend the original story to take the emphasis off Armytage’s underwear. New headline: Casual Sunday! Sunrise host Samantha Armytage goes solo as she heads out on a shopping trip after slamming rumours about her dating life.

“An earlier version of this story contained critical statements regarding Samantha Armytage’s appearance. While the story has since been amended, we apologise for any distress caused to Ms Armytage or readers more generally.”

That fulfils one of Armytage’s two demands: she has an apology, but the piece remains up. As do the photos, which, one would note, appear to have been purchased by multiple media outlets as they reported on the controversy over the original story. News.com.au’s piece credits Diimex for its republication of the photos of Armytage — the photography agency is notorious for defending its copyright.

Life as a Hollywood gossip hunter

I remember my granny’s undies and they were quite a lot bigger than that.
Talk about a storm in a … cup

Personally who gives a toss about this second rate collection of princesses. Like the Sunrise program never did anything shameful, never stepped on someone’s privacy? Grow up and stop whining, you are apparently famous for being famous. It comes with the gig.