Libs rout fails. Yesterday we reported that Kevin Andrews’ branch of the Liberal Party was facing a rout, with allies of Andrews and president of the Victorian Liberals Michael Kroger attempting to take over leadership roles in the Menzies branch, but the results haven’t been good for the conservative side of the party. Out of 400 members of the branch, 170 were present at the annual general meeting last night. It was a strong showing, but Andrews ally Andrew Asten, chief of staff to Human Services Minister Alan Tudge, failed in his bid for male vice chair against Keith Wolahan, losing 64-104. All candidates aligned with Andrews lost their ballots, throwing up a small hurdle in the conservative grab for power within the Liberal Party.

Dastyari joke falls flat. Labor Senator Sam Dastyari is writing a book, but we hope this is not where he’s finding his inspiration. Dastyari, or “the junior senator from NSW”, posted this photo of a book by Bill Cosby to Facebook over the weekend, with the caption “thank you #brokenhill. You complete me. Still can’t understand why it only cost $2.” 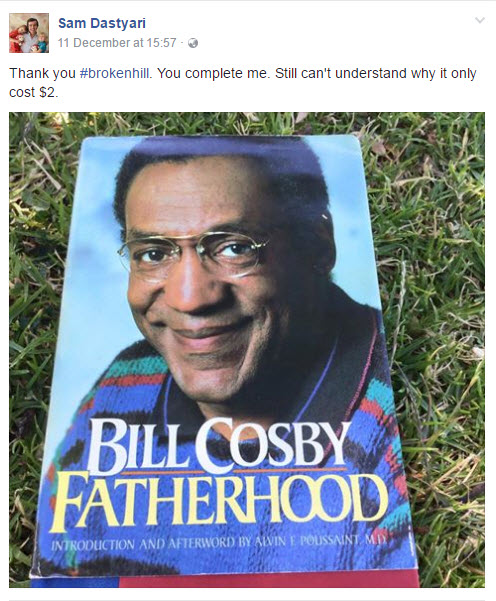 Hoist on one’s own petard. One of our spies in Sydney over the weekend relays this scene to us:

“Spotted on Sunday night at the Paddington RSL: A certain Government adviser from the Premier’s office, who claimed to ‘written the [current] RSA legislation’, arguing loudly with bar staff after getting cut off. Like they say, no good deed goes unpunished.”

Rock the vote. Yesterday we kicked off our annual Crikey Awards, asking you to crown Crikey’s Arsehat of the Year, Person of the Year and Sexiest Male and Female Politician. We included a blank space where you can write your name — or the name of the person you think should win the award — in case we forgot anyone. And boy howdy, did we ever. Human Rights Commission president Gillian Triggs, who won the Person of the Year award last year, was a popular write-in for Person of the Year, and Crikey readers could not believe we had left Cory “Make Australia Great Again” Bernardi off the list of arsehats. Peter Whish-Wilson and Chris Crewther are ideological opposites but share a place in your hearts (and/or loins), as they kept showing up as write-in candidates for Sexiest Male Pollie. We have updated the list with these additions, and that will be the end of it. Triggs, despite having a multi-hour handicap, is gaining ground steadily and could yet pip the current frontrunner. The Arsehat category is a dead heat, with just two votes separating the two leaders as of time of writing, and a scant 60 between them and the next most arsehatty. The Sexiest Male and Sexiest Female categories are anyone’s game. Vote for your favourites here.

Does Trump read Crikey? Regular readers of this column will know that we have followed the travails of the F-35 joint strike fighter for quite a while now. The cost blowouts, the many functions that don’t work, the list goes on. Overnight, US President-elect Donald Trump tweeted “The F-35 program and cost is out of control. Billions of dollars can and will be saved on military (and other) purchases after January 20th.” We would take this a sign Trump has been reading Crikey, but he hasn’t gone on a rant calling us “sad!” yet, so probably not.

I heard Chris Pyne on the radio this morning saying that since billions of dollars has been spent on developing the F-35, there’s nothing to do but continue in order to make the investment worthwhile.

Is Donald Trump smarter than Christopher Pyne ???
….. Tiddles being a member of the Howard government that ordered them when Bush’s economy needed a shot in the arm?

Andrews fail…..a good news story at last. F-35 why we should have listened to Ike. Mind you ours contractors are not much better, they can make million dollar seat belts too. Howard and Abbott and all those in between need kicking, especially Howard and his lickspittle crawling.