Want to pay out property agents in a community newspaper? Good luck …

You can't slam the competition (or even issue a gentle, and kind of lame, rebuke) in a newspaper whose bread and butter (ahem) is real estate advertising.

Local journalism in Australia is largely funded by real estate advertising, itself paid for by real estate agents who use it as a way to market themselves as well as the homes they’re selling. It works out well for the agents because the cost of the advertising can be passed on to those selling their homes, who pay standardised “marketing fees” to agencies. It’s a goldmine for community papers, but it can be tricky for upstart agents to pay out the competition, even if they’re willing to take out ads to do it.

Last week Matt O’Brien, from Homes Group Estate Agents, had an ad rejected from the Brimbank Star Weekly, published as part of a joint venture owned 66% by Fairfax’s MMP, with the remainder owned by Victorian community paper company Star. The reason given had him seeing red.

“The decision to reject the promotional advertisement ‘Some Agents Are Stale’ was based on the advertisement projecting a negative inference to our MMP-Star Weekly business interests,” he was told in emails from an ad exec he sent on to Crikey. The attached terms and conditions for advertising in the paper outline that MMP-Star can decide to not publish any advertisement that “may damage MMP-Star’s reputation or would otherwise be contrary to MMP-Star’s legitimate business interests”.

The ad, seen below, accused “some agents” of being “stale”, and was illustrated with a picture of mouldy bread. 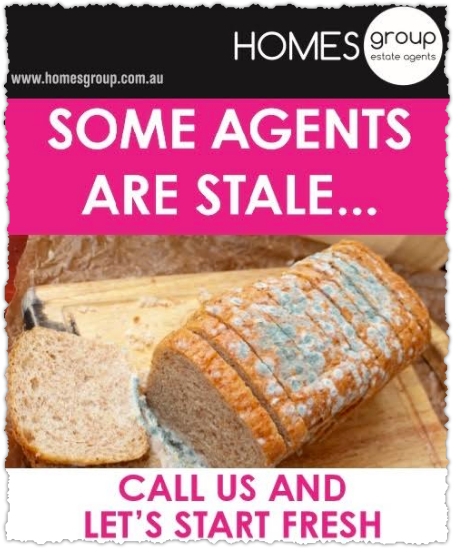 O’Brien’s business is a small one, and it has only been advertising with the Brimbank Star for eight months. “I’m absolutely shocked they’ve decided to behave this way,” he told Crikey. He says he’s been fully refunded the cost of the ad, but he’s frustrated as the rejection leaves him with no other paper to go to. When News Corp’s Leader closed seven newspapers in June, one of them was the Brimbank Leader — the natural competitor to the Brimbank Star. “We don’t have another publication — they’ve got a monopoly,” O’Brien said.

The Brimbank Star, he adds, increased its full-page rate from $611.05 to $748.00 (including GST) in September a few months after the Leader paper shut down. — Myriam Robin

Oh dear, maybe Matt will have to make a productive business instead?

20+% increase in the cost of advertising for a page in the local newspaper is disgraceful, did MMP-Star only have this large increase in areas where they have the Monopoly or was it across all of their Master heads….