Good morning, early birds. It's less than two weeks until Christmas, and there's more economic speculation, as well as more bizarre statements by Donald Trump under the news tree. It's the news you need to know, by Sally Whyte and Max Chalmers.

BACK IN BLACK (WELL, MAYBE, IN THE FUTURE)

Finance Minister Mathias Cormann is all over the papers today, promising Australia’s deficit situation will get worse before it improves, but that 2020-21 will still usher in a return to surplus. Next week the government will release the Mid Year Economic and Fiscal Outlook (MYEFO), and a number of factors, including slow wage and employment growth, are affecting the government’s bottom line. “We are not locking ourselves into an artificial deadline” on getting the budget back in black, said Cormann, and a stimulus package is off the table. Cormann defended his government’s budget management on Sky News yesterday, saying the government had saved $250 billion in net terms off the budget’s bottom line since 2013.

Also on the topic of stimulus, the governments of Western Australia and Queensland are anxious about the country’s two-speed economy, asking the federal government to spend up big on infrastructure projects as the resources boom loses steam.

US President-elect Donald Trump has labelled claims Russia influenced his election as “ridiculous”, in an interview with Fox News Sunday. “I don’t believe it,” Trump said when he was questioned about a CIA assessment that the Russian government had tried to influence the American election by hacking Democratic Party emails.

On the topic of climate change, Trump said nobody knew if it was real: “Look, I’m somebody that gets it, and nobody really knows. It’s not something that’s so hard and fast. I do know this: other countries are eating our lunch.”

Also on the topic of Trump, the Australian Financial Review has an exclusive interview with Andrew Liveris, the Australian selected as Trump’s manufacturing adviser. He told John Kehoe:

“We all think these new policies, which are pro-business and pro-growth, will help stimulate the US economy, especially on the investment side.”

“If the US economy can hit 4 per cent growth, that’s not only good for America, it’s good for the world.”

WHERE TAX DOLLARS GO ON HOLIDAY

Oxfam has released its list of the top 10 tax havens around the world, in a report finding more than $4 billion of Australian tax dollars is being shifted offshore by multinationals each year. A country is listed as a tax haven if it is “using low or zero company tax rates, unfair and unproductive tax incentives, and showing a lack of cooperation with processes fighting tax avoidance”, according to Oxfam’s report. So who’s on the list? Some familiar names and some surprises:

Sydney: Prime Minister Malcolm Turnbull will today announce the government will sign off on building a second airport for Sydney at Badgerys Creek.

Sydney: Foreign Minister Julie Bishop will speak about Australia’s candidacy for the UN Human Rights Council in 2018-20 at the Lowy Institute on World Human Rights Day. This graphic is being used by the Department of Foreign Affairs and Trade to spruik our human rights credentials, but what is missing? Asylum seeker and refugee human rights? 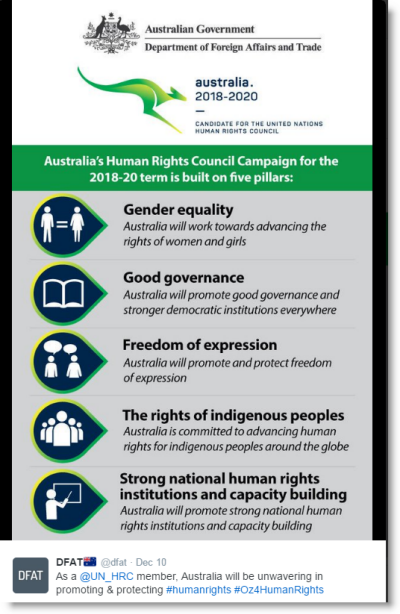 Canberra: Directions hearing for former Family First senator Bob Day at the High Court, sitting as the Court of Disputed Returns. Day’s hearing is into whether Day was eligible to be elected, despite the interest he held in the building that housed his electorate office.

Darwin: The NT Royal Commission into the Protection and Detention of Children will hold a closed hearing today and hear evidence from Dylan Voller.

Just to be clear: there is no alternative climate plan — Laura Tingle (Australian Financial Review $): “There is not only no alternative plan on how Australia meets its emissions reductions targets, there’s no clear plan for how to re-engineer the energy market to take account of these massive changes in any price-efficient way.”

West proves not all cultures are equal — Jennifer Oriel (The Australian $): “Islamism has become a Western condition. Successive governments have diluted Western values to the point where they are no longer taught in schools. The result is a population unschooled in the ­genius of our civilisation whose youth cannot understand why it is worth defending.”

Russell Street bomber should not be denied parole on the basis of outrage alone — Janna Thompson (Canberra Times): “Should he be kept in prison as an expression of our outrage for such crimes and our sympathy for the victims? But expressions of outrage, as Craig explained in his thesis, are not a good basis for law.”

Four people have been arrested in Indonesia after police safely detonated a homemade bomb on the outskirts of Jakarta. Police said they believed it had been prepared for an attack targeting tourists. — New York Times

Russian-backed Syrian troops and Islamic State forces are fighting for control of the ancient city of Palmyra. Islamic State was driven from the city in March but, according to the Syrian Observatory for Human Rights, the terror group has now regained control. — Reuters

A blast at St Mark’s Cathedral in Cairo has killed at least 25 members of Egypt’s Coptic minority. The largest Christian community in the Middle East, Egyptian Copts have faced discrimination under pre- and post-revolution governments. — The Guardian

American folk singer Bob Dylan has accepted his Nobel Prize for Literature via proxy, with the US ambassador to Sweden reading remarks prepared by the songwriter at the presentation. Patti Smith led a rendition of Dylan’s A Hard Rain’s A-Gonna Fall. Despite occasionally forgetting the lyrics on account of nerves, Smith’s performance left some audience members in tears. — BBC

‘I just wanted to die’: man responsible for Scotsburn fire speaks out (The Ballarat Courier) “‘I never slept for weeks afterwards, but that night I was putting little spot fires out next door, in the backyard,’ Mr Skimming said.  ‘(I was) just completely physically and mentally wrecked.’ In the days that followed, police would call regularly to ensure none of the numerous death threats directed at Mr Skimming had been carried out.”

The untold story of Andrew Hastie’s tragic SAS mission in Afghanistan (Herald Sun $) “The emotional fallout from the boys’ tragic deaths would set Hastie on a path out of the military and, later, into politics, as he rethought his belief in how liberty and democracy could be established in the ancient, complicated cultures that existed in Iraq and Afghanistan. He came to the conclusion that “democracy at gunpoint’’ was not the way.”