Shady Alsuleiman says not only doesn't he hate Peppa Pig, but he hasn't even heard of her.

Oh dear. Everyone’s favourite cartoon pig can’t seem to catch a break. First she was preaching radical feminism, then Mark Scott threatened to sacrifice her on the altar of ABC budget cuts, and now the Muslims are out for her. At least, that’s what the Oz said yesterday, prompting a global media frenzy, after National Imams Council head Shady Alsuleiman threw his support behind a maker of Islamic cartoons.

But the Sheikh, one of several Muslims who are, the Oz implied, are out to get Peppa, hit back, saying he’d never even heard of her. “This ridiculous media frenzy about the Peppa Pig cartoon is based firstly on a misleading headline and secondly on an insatiable appetite by some media outlets to misrepresent and embellish the reality for sensationalist propaganda purposes,” he wrote on his Facebook page. “Today is the first time I came to know of the program.” Oh, don’t say that, Peppa’s suffered enough! 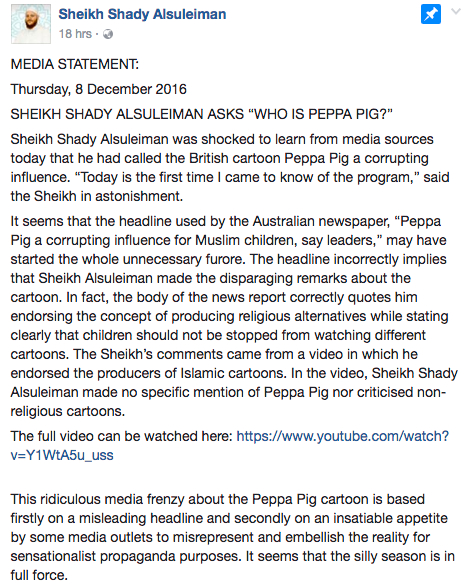 Do people think pork is some sort of muslim kryptonite? It’s really not such a big deal. The Qur’an even allows you to eat pork if there are no alternatives.