From Malcolm Roberts to the new president of the United States, it has been a very good year for conspiracy theories, writes Crikey intern Harrison Johnstone.

It has been a prosperous year for those whose heads fit well into tinfoil hats. Yes, the humble conspiracy theory remained alive and well in 2016, as people across the world, dogged by cognitive dissonance, grasped for outlandish explanations — and, well, those stories just sell better.

If we’ve learned anything from watching President-elect Donald Trump’s rise to power this year — besides the fact that the US has literally no short-term memory — it’s that if you tell a lie for long enough, it will eventually become truth.

Of course, not all the most outlandish claims have been geographically isolated to the 2016 US election cycle; Australians have copped a few high-profile tall tales themselves, some local twists on the conspiracy theory genre that brought either hope or headaches — depending on which side of the asylum wall you’re on.

And here now, some of our favourite “eventual truths” from 2016:

The bewildered Western Australian senator is recovering after a public fallout with colleague Pauline Hanson, who claims he’s “not a team player”, and battling for his seat in the High Court.

Culleton has found that most of his troubles arise as he’s arguing his case against a constitution … he simply can’t find.

“They tell me it has been in a drawer since 1975 … so if you wanted to actually go and find it, it would be near impossible,” he said outside court on Wednesday.

Oh those rascals, hiding core, government-establishing documents in drawers — when will they learn?

The mock conspiracy theory, established by @RedPillAmerica in 2013, rose to prominence when US Senator Ted Cruz ran in this year’s Republican presidential primaries.

The theory alleges that Cruz is actually the unidentified serial killer, notoriously known as the Zodiac Killer, who murdered 37 people during the late 1960s and early 1970s and left puzzling notes.

This evolved into a serious issue for Cruz’s campaign when it was revealed in a Public Policy Polling document that 38% of Florida voters thought it was possible that Ted Cruz is the Zodiac Killer — 10% said he was for sure. Lyndon Johnson himself would have been thrilled when Ted Cruz’s wife publicly denied her husband was the notorious murderer.

Cruz was born one year after the Zodiac’s last confirmed murder. But that’s Canadian cunning for you.

In his maiden speech to Parliament, the One Nation Senator wasted no time in dispelling rumours that the world’s impending doom would be a result of climate change.

Roberts claimed there was no link between human energy consumption and climate change, citing that, statistically, temperatures hadn’t warmed since 1995.

Physicist Brian Cox tried in vain to educate Roberts on an episode of Q&A, presenting the senator with graphs illustrating rising CO2 emissions and accompanying rises in sea level. Roberts claimed NASA had manipulated the data. Roberts, unsurprisingly, offered no evidence for his claim.

What is it they say? You can lead a horse to science, but mate, come on, it’s a horse.

Pizza-gate: the cheese-covered conspiracy that goes all the way to the White House

Fuelled by inflammatory comments on 4chan (enter at your own risk) and a lack of evidence, a North Carolina man waltzed inside a Washington pizzeria firing a rifle into the air, seeking to disband an alleged child sex ring.

Edgar Welch was self-investigating a rumour that Comet Ping Pong pizzeria was a front for a Democratic National Committee-led child sex ring involving gruesome satanic rituals — “pizza” was supposedly used as a code word for paedophilia in a set leaked emails.

The conspiracy has swelled in recent days with the son of Trump’s choice for national security adviser and presidential transition team member, Michael Flynn, tweeting he was unsure the reports were fake. Flynn was soon fired.

Australian basketballer Andrew Bogut also weighed in on the theory, claiming he was unsure as to whether it’s a hoax or not.

Trump: the whole election is rigged … oh wait, I won.

Of all the rhetoric Donald Trump spewed out this election, electoral rigging was a topic he consistently rehashed — even after he won (the ego on this guy) …

For months on the campaign trail, the Donald whinged of vote-rigging, electoral fraud, fake voters and people returning to vote “15 times” for Hillary Clinton. It would seem the President-elect returned to this arena so much he started to believe his own rubbish, giving Clinton the moniker “Crooked Hillary”.

After the election was over and Trump took the victory he revisited the issue stating that without electoral rigging, he would have won the popular vote too … 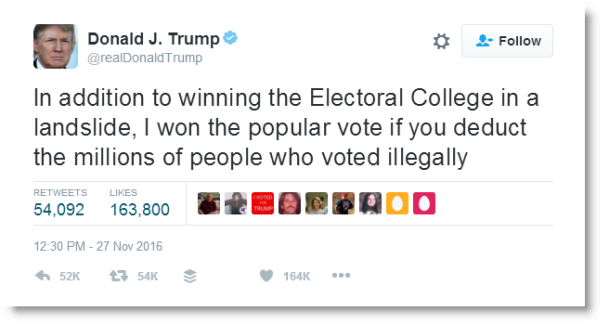 Time to give those Twitter fingers a rest, Donald.

The cringeworthy term “conspiracy theory” has really passed its used-by date. It was popularised by the CIA through something called a psychological operation following a growing number of people questioning the official narrative of the JFK assassination. The term is nothing more than propaganda as the word “conspiracy” is now forever married to the word “theory” – a deliberate corruption of our language which in itself, ironically, was a conspiracy.

Not everything is a theory. There is some very compelling evidence in relation to the Madeline McCann case for example that indicates the kidnapping story as reported by mainstream media is a blatant and monstrous lie. I encourage readers to check out UK researcher Richard D Hall who has presented this evidence in a comprehensive series of documentaries.

I don’t give conspiracy theories much credit. They just require too much cooperation among disparate, often warring parties, to plan, implement and most of all keep secret. Mostly can’t happen. Think Australian Governments, Federal and State, Oppositions when they get into Government, and their various instrumentalities.

On the other hand, concerted action does seem to happen organically, so to speak. Cigarette companies have kept their game going for 50 years so far, recruiting diminishing proportions of two more generations of young when the industry should have shut down by about 1990 at latest, apart from servicing middle aged and older addicts. Fossil fuel corporations and other business interests will probably end up having delayed effective action on climate change by 30 to 40 years, especially in the USA and its kid brother Australia (so the good times continued for few more generations of CEOs / senior executives / big shareholders). Hopefully the world can recover the lost years in time.