Laming-brain. Government MP Andrew Laming went on a Facebook trolling binge on the weekend, spending all of his Saturday replying to members of the public in the comments thread on a Facebook page called “The Simpsons against the Liberals“. The page is devoted to making memes that mock the Liberal Party and its members, using scenes from TV show The Simpsons. The page has almost 80,000 likes and on the weekend targeted Laming for comments he made about education policy, tagging his official page.

Laming himself went on to argue with many commenters on the page, in a series of screenshots captured by Junkee. The news website also linked to a social media guide by Laming from 2011, which recommended avoiding public arguments. A Crikey tipster tells us he actually attended a workshop by Laming in 2012 when our tipster was a public servant in Queensland. Laming told those in attendance he used the electoral roll to find new voters to connect with on Facebook to increase his reach. We’re not sure how this benefits public servants, but it’s enlightening to see where his expertise comes from — and where it is going.

Rogue citation. The Health Department has denied that one of their staffers updated Tony Abbott’s Wikipedia page to say that the former prime minister had “chimpanzee ears” and is “dishonourable”. The denial comes in documents submitted to Senate estimates, in answer to a question from Labor Senator Catryna Bilyk regarding a Fairfax article claiming:

“Someone from the Department of Health network editing the Tony Abbott page to state the former PM has ‘chimpanzee ears’, is ‘dishonourable’, that his maternal grandfather ‘died of shame’, and that ‘Abbott has the dubious honour of being the most unworthy and grossly undeserving holder of the prime ministership in Australia’s history’.”

Hire drill. The ABC is advertising for a new executive producer for Catalyst, the controversial ABC science program, which will take a new form and be led by a new team after its current staff were made redundant this year. Ms Tips found it interesting that recruitment for the role is going through a consultancy and not the ABC’s own HR department. 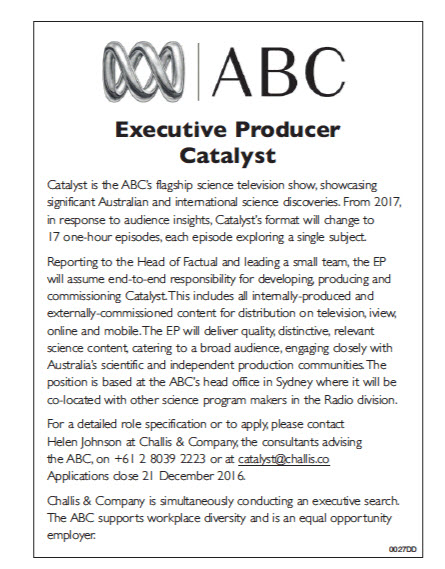 If this petition saves just one life … While Kevin Rudd rails at his now-traditional targets — Malcolm Turnbull, Bill Shorten, factions, unions, the party that once made him leader — in an op-ed for Fairfax, we think it’s incumbent on all those who care for the former prime minister to see his latest missive for what it really is: a cry for help from a man stricken with the debilitating disorder known as Limelight Deprivation Syndrome. And here at Crikey we’ve seen too many good men and women succumb to this affliction. We say “enough is enough” — so we’ve launched a change.org petition calling on the federal government to invest in research into LDS and its treatment to combat this scourge. We’re calling on Malcolm Turnbull to finally take REAL ACTION on a REAL ILLNESS. We hope you will support this important cause — for Kevin’s sake, and for ALL our sakes.

Flying Heap of Crap Watch. Bad news out of Canada for everyone’s favourite plane, the F-35: the Trudeau government is in negotiations with Lockheed rival Boeing to follow Australia’s example and purchase 18 Super Hornets while it works out what exactly it is going to do to replace its air fleet. Originally the Canadians were going to buy more than 60 F-35s, until the fact that it can’t shoot, can’t dogfight and often can’t fly (it recently had another grounding due to dodgy insulation catching fire) gave Ottawa pause. It’s unsurprising given Congress has now demanded that the F-35 face off with the venerable A-10 Thunderbolt before deciding whether to shutter the A-10 program. If the F-35 can’t defeat the 40-year-old workhorse of close-in ground support, Lockheed and the shills for the F-35 in places like our own Defence Department are going to look mighty stupid indeed.