Good morning, early birds. Victoria could become the first state to successfully legalise medically assisted dying, climate change could thwart Malcolm Turnbull's leadership again, and the health of the economy is in -- and it's not looking good. It's the news you need to know, by Sally Whyte and Max Chalmers.

The national accounts will be released today, and it is looking likely that Australia’s gross domestic product (GDP) figures for the September quarter will show the Australian economy had its first quarter of negative or stalled growth in five years. It would be Australia’s fourth negative quarter in the past 25 years. The Australian Financial Review‘s Jacob Greber writes:

“The darker outlook for the September quarter accounts – which would increase the challenge for Treasurer Scott Morrison‘s mid-year budget update due on December 19 – comes despite a surge in commodity prices during the quarter.”

While economists believe the economy will grow again in the fourth quarter of the year, and that a possible contraction would be small, the headline will cause headaches across the government.

The Victorian government is set to holding a conscience vote on legalising assisted dying next year, with Premier Daniel Andrews due to hand down his party’s response to a cross-party committee’s recommendation that the state allow euthanasia for those suffering from incurable conditions. Andrews told the ABC this week his view on legalising assisted dying changed after the death of his father earlier this year, but it is unclear how other MPs will vote and if the law will pass. Essential polling yesterday showed that support for euthanasia across Australia sits at 69%, consistent with previous years.

“It’s always been our policy to have a review. I didn’t mention an emissions intensity scheme — that’s not in any document to the Coalition has put out. The Turnbull government is not contemplating such a scheme. We are not advocating such a scheme” — Josh Frydenberg

“I will not lead a party that is not as committed to effective action on climate change as I am”.  — Malcolm Turnbull

Canberra: One Nation’s Rod Culleton will appear at the High Court, which is sitting as the Court of Disputed Returns. It is also looking increasingly likely that if Culleton is successful in staying in the Senate, he will leave Pauline Hanson‘s One Nation Party.

Canberra: The Senate inquiry into the possible Bell Group deal between the federal government and the West Australian government will hold its first public hearing today, with representatives from the Tax Office, Treasury and the Attorney-General’s department will appear. Attorney General George Brandis will not appear today. Need a refresher on what is going on? We’ve got you covered.

Darwin: The Royal Commission into the Protection and Detention of Children continues, with commissioners Margaret White and Mick Gooda due to visit the Don Dale Youth Detention Facility. In other royal commission news, Dylan Voller, the young prisoner seen in Four Corners strapped to a chair and wearing a spit hood, is reportedly planning a hunger strike. Voller’s mother says guards at the Darwin Correction Centre where he is now held have threatened to harm him if he gives evidence at the royal commission.

Hobart: Environment Minister Josh Frydenberg will hold a press conference alongside the Aurora Australis before it heads to Antarctica on Thursday. Frydenberg will also “provide some detail” regarding the naming of Australia’s new icebreaker. We are sad that his predecessor Greg Hunt has already ruled out “Boarty McBoatface”.

SOMETHING TO CHEER ABOUT

Australia has won the Chappell-Hadlee trophy after defeating New Zealand by 116 runs in Canberra last night. David Warner‘s 119 was a masterclass, with 14 boundaries. The third and final match of the series will be played in Melbourne on Friday night. The sun setting on Manuka Oval was a beautiful sight: 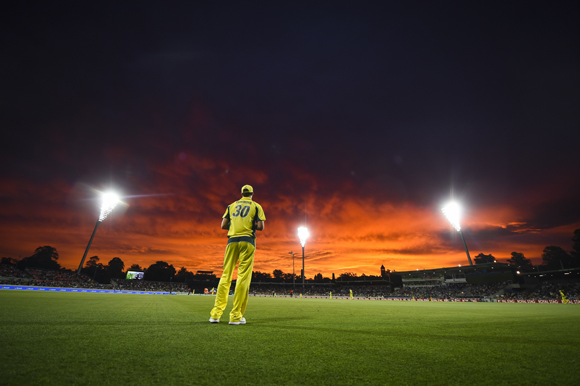 Factions will strangle Labor if the party does not embrace reform — Kevin Rudd (Sydney Morning Herald): “I am not anti-union, I am anti-faction. The success of progressive politics has always been its ability to apply afresh its continuing values to the changing circumstances of the times. That is why for Labor to survive and to prosper in these turbulent times, party and policy reform must be embraced with urgency.”

Liberals try again with climate policy — Jennifer Hewett (Australian Financial Review $): “One energy expert says the running joke in the industry is that there are three official goals for Australia’s energy policy – that it be cheap, reliable and de-carbonised. The problem is that it’s possible to achieve only two out of the three.”

The nuts and bolts of an emissions intensity scheme — Graham Lloyd (The Australian $): “Politically, it all adds up to a price on ­carbon. Stripped of complexity, both can be portrayed as a ­carbon tax, which the Coalition staked its claim to office on ­putting to the sword.”

Malcolm Turnbull’s carbon emissions proposal: Savvy Hanson way ahead — Rita Panahi (Herald Sun $): “Hanson is increasingly lauded for having the guts to address issues that Labor, the Coalition and Greens refuse to even acknowledge. She is no longer a pariah but is becoming an admired figure, even among those who have never voted for her or her party.”

Iranian President Hassan Rouhani has said his country will not let the US tear up the historic nuclear deal lifting sanctions on his country. President Barack Obama is expected to sign off on a law extending the US’s ability to place Iran under sanctions for another 10 years. The legislation is seen as a potential breach of the agreement by Iran, where Rouhani is facing re-election next year and pressure from hardliners opposed to the original deal. — The Guardian

Angela Merkel has kicked off her bid to claim a fourth consecutive term as German chancellor by expressing support for a ban on full-face veils and promising to take a tougher stance on immigration. The comments were made during a speech at a Christian Democratic Union party congress and were met with an extended standing ovation, despite the fact Merkel was re-elected as the party’s leader with less support than two years before. — Reuters

A Saudi Arabian court has ordered the execution of 15 people accused of spying for Iran. The two countries are locked in proxy struggles across the Middle East and severed diplomatic relations in January after a Saudi court executed a Shiite cleric, provoking Iranians to storm the Saudi diplomatic mission. — New York Times

Why Raul Castro Is Happy Fidel Is Gone (Politico) “It was never easy being Fidel’s faithful servant. It was Raul’s practice to retreat into silence when he strongly disagreed with his brother. If the stress of being overruled became unbearable, he would go off to the countryside to drink and brood. But he rarely ever allowed a hint of dissent or disrespect to surface.”

Facebook’s Walled Wonderland Is Inherently Incompatible With News (Monday Note) “Facebook will solve just enough of the fake news to put down the raging PR fire. But the company will never jeopardize its money machine for the sake of mere societal considerations.”

We’ve had contact from many readers asking that links to paywalled sites be labelled as such. When links appear in headlines in the Commentariat or What We’re Reading sections, this is already the case. Links in other text will not be marked, as sometimes it is not mentioned to which website the link redirects. In the meantime, we also encourage you to subscribe to as many news outlets as you can — they do good work.