Happy interest rate day, early birds. It's the news you need to know, by Sally Whyte and Max Chalmers.

A LEADER WITH NO ARMY, ABBOTT RESPONDS TO GREEN ROUT

Former prime minister Tony Abbott has labelled the decision to cut the Green Army “hardly a smart move” and said he was “dismayed” by reports the program would be scrapped. “Not only has it been good for grass roots conservation but it got unemployed people working too.”

Abbott didn’t shy away from letting Malcolm Turnbull know how he felt, writing on his Facebook page: “It’s a bad principle to axe your own policy for the Greens policy because it means that their priorities are more important than ours.”

The axing of the Green Army hasn’t been met with too much disappointment elsewhere, and as reported yesterday (here and here), its environmental outcomes fell short of expectations.

ABC’s 7.30 last night reported on the death of gay teenager Tyrone Unsworth. The 13-year-old confided in a friend the day before he took his life that he was scared of going back to school. “He was an absolute mess, crying his eyes out and telling me everyone wants him dead and I said, ‘Tyrone, what do you mean everyone wants you dead?’,” Gypsie-Lee Edwards Kennard told the program. There have been calls for the Safe Schools program to be introduced at all schools in Australia. Anyone needing support can call Lifeline on 13 11 14 or specialist queer counselling service Q Life on 1800 184 527.

“There is very real concern among colleagues that this goes down a track we were promised we would not go down.”

— An un-named government MP, quoted by Fairfax’s James Massola and Adam Morton, adds to the chorus expressing their discontent with the government’s terms of reference into its review of climate policy. If this is the reaction to a review, what will happen when the report is actually handed down?

There has been much consternation over US President-elect Donald Trump‘s diplomatic mis-steps, but Australia may have one of its own on the cards. One Nation Senator Malcolm Roberts is set to travel to the US next week to speak at conservative functions, and The Australian reports he will also meet Myron Ebell, whom Donald Trump has chosen to lead the Environmental Protection Agency’s “transition team” and doesn’t believe in climate change. Roberts told the Oz One Nation is the “only party” to repair Australia’s relationship with the US.

Sydney: The Reserve Bank of Australia will hand down its last rates decision for 2016 at 2.30pm. Most pundits are saying the board will decide to leave rates at the record low of 1.5%. That hasn’t stopped Westpac and NAB raising rates for investors, and in other interest news, Future Fund chairman Peter Costello says the fund faces challenges to deliver the returns expected.

Townsville: Adani CEO Gautam Adani and Queensland Premier Annastacia Palaszczuk will announce the regional as headquarters of the company’s new coal mine. The AFR is reporting Palaszczuk is at odds with her federal Labor counterparts as she lobbies the government to lend the Indian company $1 billion to build its $2.2 billion railway.

Canberra: Australia takes on New Zealand in the second of three one-day matches in the Chappell-Hadlee series.

Melbourne: The Victorian opposition is attempting to rush through laws to keep Russell Street bomber Craig Minogue in jail for the rest of his life, before he is due to apply for parole in January.

Darwin: The Royal Commission into the Protection and Detention of Children in the Northern Territory continues to hear evidence from Keith Hamburger, author of a recent review of NT’s Department of Correctional Services. Yesterday Hamburger told the commission Don Dale youth detention centre was a “human storage” facility and a place of “disrepair and despair”.

The secret of John Key’s success? Boring, steady and two bob each way — Greg Sheridan (The Australian $): “His formula for success, which he sometimes shared with Australian interlocutors, was to have only a couple of big objectives, such as raising the GST, for a parliamentary term and otherwise emphasise being boring and steady and ­reliable.”

Adani’s request for billionaire welfare should be rejected — Matthew Stevens (Australian Financial Review $): “…the private owners of the rail and port links look likely to make guaranteed, risk light rewards. And if that is the case, then a billionaire like Gautum Adani should not need the comfort of direct funding by Australia’s taxpayers in any shape or form.”

We can’t bank our future on Malcolm Turnbull’s climate change magic pudding — Pat Conroy (Guardian Australia): “…because the government has taken shortcuts to meet the 2020 target, Australia is locked into a more polluting economic structure than implied by the minus 5% target. This in turn will make reaching the 2030 targets so much harder.”

The Iraq invasion was a disaster but Donald Trump’s Taiwan folly could be worse — Peter Hartcher (Sydney Morning Herald): “If Trump wants a fight with China based on ideological phantasmagoria, Australia can’t stop him. But we’d be crazy to abet him.”

New Zealand Prime Minister John Key says there was no secret scandal behind his decision to leave the top job. “The marriage is rock solid, the health is absolutely tickety boo,” he told local media. “Give the doctor a ring.” — New Zealand Herald 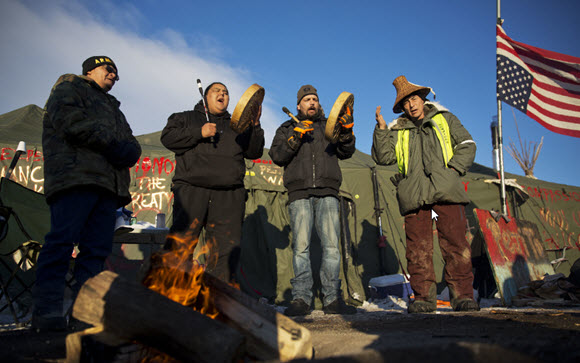 The companies behind the controversial Dakota Access Pipeline have accused the White House of political interference after their project’s approval was delayed. Alternative routes are now being considered after months of protest by the Standing Rock Sioux Tribe, who have said the oil pipeline would tarnish sacred sites and endanger local drinking water. — BBC

President-elect Donald Trump has picked former rival Ben Carson to serve as his secretary for the Department of Housing and Urban Development. A retired neurosurgeon, Carson backed Trump after he bowed out of the Republican primaries. He has no experience in housing policy, but reportedly spent part of his childhood in public housing. — New York Times

The anti-establishment Five Star Movement party has called for an early election in Italy after helping defeat yesterday’s national referendum. Co-founded by former comedian Beppe Grillo, the party has emerged as one of the big winners in the wake of the referendum result and the resignation of centre-left prime minister Matteo Renzi. — The Guardian

Police rack up an almost perfectly deadly record in Philippine drug war (Reuters): “Efren Morillo, one of the rare survivors of a police raid, said he too was unarmed when an officer, standing a few feet away, shot him through the chest. As Morillo lay bleeding, feigning death, officers began shooting his companions. “I prayed to God to let me live,” he said.”
Helen Garner’s Savage Self-Scrutiny (The New Yorker): “Garner’s work as a journalist and a novelist constantly insists on the connection between writing about life and comprehending it; to try to do both responsibly and honestly — without bullshit preamble, or, for that matter, bullshit amble — is what it means to be alive.”