ABC staff roast toaster ban. Staff at the ABC in Melbourne are still simmering with resentment at the ban on toasters at the broadcaster’s fancy new building, with more than 30 staff banding together to make a video about the appliances. In May, Crikey reported staff at Aunty were in uproar at the war against warm bread, but until now the issue has been lukewarm. In a video shown at the ABC’s Christmas party this week, big names like Fran Kelly, Barrie Cassidy, Michael Rowland, Virginia Trioli and Tamara Oudyn featured in a covert mission to allow staff to enjoy the crunch of some perfectly toasted Tip Top. 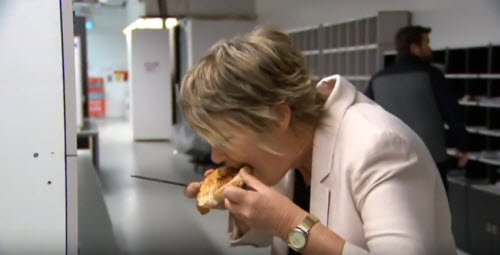 The video, set to the Mission Impossible theme, features a smuggled toaster supplying staff with crunchy contraband, hidden in vending machines and in tape decks and hastily consumed. It took about three days to make. Ms Tips understands that since the move to temporary offices in the new building, staff asked for the toaster situation to be addressed, to no avail. Since then staff have been using a sandwich press in an attempt to make their breakfast, which sounds thoroughly depressing and possibly even more dangerous. The hilarious video could be the catalyst for the staff to rise up (now they have some yeast in them) and reclaim their toast rights.

Centrelink debt collectors target innocent people. The government is crowing about its new automated system tracking down money incorrectly paid to welfare recipients, but Crikey is aware of multiple cases of people who have been unfairly and incorrectly targeted under the system. Using a computer program called WPIT (Welfare Payment Infrastructure Transportation), the department has issued almost $650 million in debt notices by matching people’s tax records with the earnings they reported to Centrelink. People have been contacted by Centrelink about payments they received more than six years ago — longer than the five years the Tax Office requires records to be kept — and some who no longer live at the address where they received payments have been contacted by debt collectors. Many have been told to pay the government thousands of dollars, and The Australian yesterday reported $4.5 million in debt notices are generated every day. At least three people Crikey knows of have been incorrectly targeted by the system. One person says that they did not receive Newstart for a full financial year, but undertook contract work that was reported to the ATO after they discontinued their welfare payments. The tipster has since had Centrelink come calling, claiming that they owe money because their earnings reported to the Tax Office are above what was reported while receiving a payment:

“Their default assumption, unless proven otherwise, seems to be that any employment that occurred in a financial year when Newstart was claimed, occurred over the whole year, and therefore overlaps with the Newstart period, and therefore there was a Newstart overpayment that must be paid back. If this is how their defaults do indeed work, it means that anyone who had employment in an financial year that they also drew on Newstart is automatically treated like a fraudster. Their tacit accusation is that I was claiming Newstart while employed, defrauding the Commonwealth. And the reverse burden of proof is on us, to prove our innocence, rather than for them to prove our guilt.”

This seems to be a common problem with people doing contract, casual or intermittent work in years they have received Newstart or Youth Allowance. Have you been contacted about a Centrelink debt that you think has been incorrectly applied? Get in touch here.

NBN Co hires more PR than almost the PM’s entire office. The number of spinners employed by NBN Co has skyrocketed under the Coalition. According to information provided in response to a question on notice from Senate estimates, NBN Co now employs 46 staff to manage its communications and marketing. This includes six in corporate communications, nine in state corporate affairs, seven in employee communications, a massive 12 in consumer and social media, 10 in government relations, a head of function and one in administration. By comparison, under Labor in July 2013, NBN Co had just 27 staff across corporate and government relations. It is even higher than in February, when NBN Co reported to Parliament that it had 28 communications staff.

The Prime Minister’s Office employs just 50 staff in total, including communications staff. It could be argued that the scale of NBN covering the whole country would warrant a high number of staff, but Australia Post has just 38 communications staff out of its 38,000 employees. NBN Co, by comparison, has just under 5000 staff, according to its most recent annual report.

NBN Co’s decision to go into consumer marketing through its blog (currently offering tech gift ideas for Christmas), has raised some eyebrows given the NBN is a wholesale service that does not sell products direct to the public.

Despite the boom in staff numbers, NBN Co is doing much more with much less in terms of funding compared to 2012-13. The budget for the corporate and regulatory affairs functions of NBN Co was $55.6 million in 2012-13 (including $33 million in ads), whereas now it is $20.2 million in total.

Vote early, vote often. Yesterday we noted that the halls of power were bustling with the news of a different kind of election, with journos in Parliament voting on the members of the press gallery board. The Guardian‘s political editor, Katharine Murphy, tweeted this photo of Paul Karp’s pitch to his colleagues, and Ms Tips (who doesn’t get a vote) thinks it is a winner: 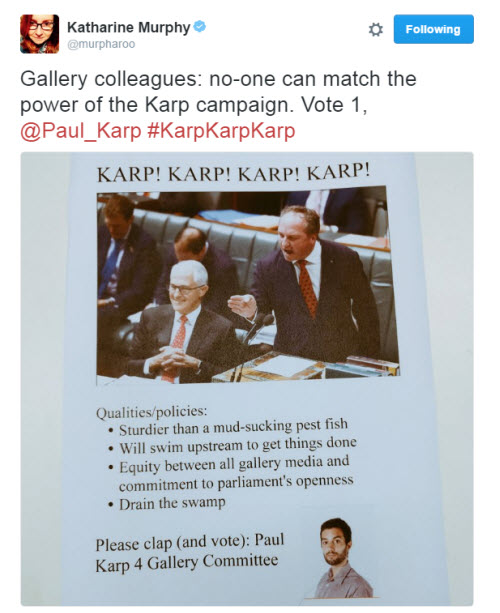 Well, can the people at The Australian have toast, I doubt it, so why should the people at the ABC have time for toast, they got time to make a silly show about it.
About the Centerlink payments, I had a friend working for Centrelink in Townsville 2 years ago, and he had to find so many incorrectly paid welfare recipients, and if they could not, then they would have to accuse people of it and stop welfare. The person working for Centrelink moved away and got another job of a different kind elsewhere.