The war of attrition against Abbott’s Green Army

Tony Abbott's signature Green Army environment policy will reportedly be stood down to save just over $250 million in this year's MYEFO. Josh Taylor and Harrison Johnstone report.

The reported imminent demise of Tony Abbott’s Green Army environmental program should come as no surprise, given the government has been slowly gutting the program for the past year.

The Green Army, Tony Abbott’s signature environment policy designed to not only replace the carbon tax but also get young people into work, will reportedly be axed in the upcoming Mid-Year Economic and Fiscal Outlook, with funding set to go back to Landcare as a result of the deal secured by the Greens on Thursday in exchange for support of the 15% tax rate for backpackers working in Australia.

Critics of the Green Army project said it was mainly designed to replicate what Landcare was already doing but paying young people much less than workers under the Landcare program would receive. While the government claimed workers could get up to $900 per week for the work, Reports from 2014 when the project launched stated that workers would get between $300 and $500 per week for 30 hours’ worth of work.

The deal will save about $350 million, with $100 million to be returned to Landcare, resulting in a net saving for the government of $250 million. Labor has questioned whether the Greens were kept in the dark about the planned cut to the Green Army when they were in negotiations with the government for the backpacker tax.

The government has been busy talking up the success of the program as it appears to be planning to cut it. Environment Minister Josh Frydenberg told Sky News this morning that the program had been successful in rolling out more than 1000 projects.

“Whether it’s planting 2 million trees as a result of the Green Army or ridding 90,000 hectares of weeds, but these are issues that have to be looked at in the overall context of the budget situation, he said, declining to comment on the report. “I don’t want to pre-empt what will be released in MYEFO, other than to say we have to find savings across the board.”

But the true vision for the Green Army was never really realised. What what supposed to be a program of 15,000 workers aged between 17 and 24 annually working on 1500 projects at a cost of $300 million annually of 2018-19 never eventuated. In the last MYEFO, $350 million was cut from the program, limiting it to 500 projects per year with 5000 workers. According to recent statistics released by the Environment Department in response to questions on notice from Senate estimates, since 2014, just 627 projects have been completed, with 264 projects currently underway, and a total of 1145 announced. The plans for indigenous engagement appears to have also fallen short of the goal. As of last year, 725 Aboriginal and Torres Strait Islander participants were included in the program, short of the 1000 target for the first five years.

The 20 million trees program is also a long way short of its 2020 goal. There are 13.4 million trees planned to be planted, but Frydenberg said this morning just over 2 million trees had been planted, meaning that in the last year of the project, the government would likely need to plant close to 5 million trees. Additionally, a conservative estimate of the carbon impact of the Carmichael coal mine would mean 11.29 million more trees would have to be planted per year to neutralise the output of the mine. Environment consultant group Ndevr Environmental reports this morning that Australia is 1.55 million tonnes off its Paris climate target. 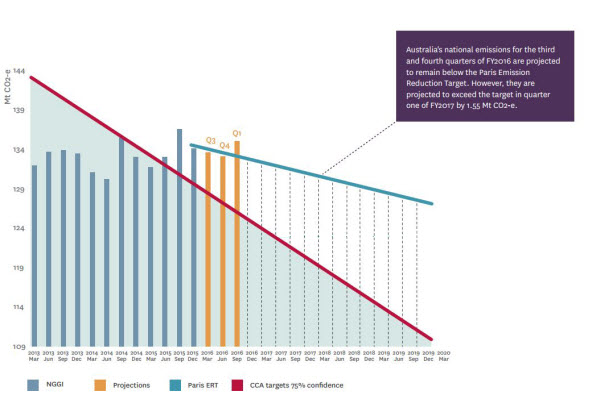 The government today announced the terms of reference for its review of climate change policies, including a potential return to a carbon tax. The review will start in February 2017 and will be completed at the end of next year. Frydenberg said the Emissions Reduction Fund would also be part of the review, with just $400 million left in the $2.5 million carbon offset program. 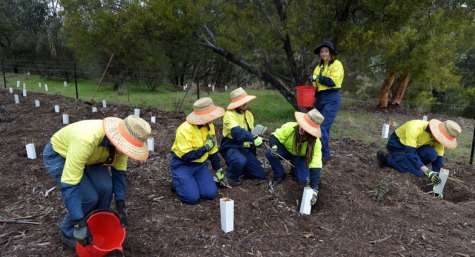 We need trees because we need trees. Funding for reforestation should be declared for its own sake, to protect it from the to-ing and fro-ing of climate funding. It only takes a sceptic to point out that the carbon from the Carmichael coal mine will be in the greenhouse forever, whereas the carbon will be only in those trees for the lifetime of the trees.