Good morning, early birds. Australian politics is never over, with environmental announcements, missing superannuation payments and mining deals. But let's just watch that Steve Smith catch on repeat. It's the news you need to know, by Sally Whyte and Max Chalmers.

NOT EASY BEING GREEN

Environment Minister Josh Frydenberg will announce the terms of reference for a government review into climate policy today, with a wide range of issues on the table.

The government will consider an “emissions intensity scheme” as part of the review, reports the Sydney Morning Herald, in a form of carbon pricing that would be different to the carbon tax scrapped by the Coalition. The review will also look at the effectiveness of state-based climate policies

The Australian reports the Emissions Reduction Fund, a cornerstone of the government’s Direct Action policy, will be up for review, and it will also cover ” a “potential” long-term emissions reduction goal”.

Meanwhile, The Guardian reports Australia’s greenhouse emissions are rising, and that we have emitted twice as much as was budgeted for by the Climate Change Authority since 2013.

In other environmental news, Tony Abbott‘s Green Army program is set for the scrap heap as part of the Mid Year Economic and Financial Outlook, as the government looks to save $350 million from the program. Some of the money saved will be re-directed towards Landcare, after the government pledged $100 million to the agency in a deal with the Greens on the backpacker tax last week.

Australian workers were dudded out of $3.6 billion of superannuation payments in 2013-2014, a study by former Treasury official Phil Gallagher for the Industry Super Association has found. The report finds that young and low-income workers were worst affected by unpaid super, and construction, mining, manufacturing, and hospitality were the worst industries for dodging responsibilities. The report calls for a review into the issue, which as well as leaving workers shortchanged, could affect the government’s bottom line. The Australian quotes ISA’s chief executive David Whiteley: “Today’s retirement income policies are made on the assumption that, into the future, we’ll all have super. As pension access tightens and home ownership ­declines, those missing out on compulsory super stand little chance of a decent standard of ­living in ­retirement.”

In what is likely to be the government’s next target area for budget repair, The Australian reports today Centrelink is following up $4 billion in welfare overpayments using a new automated system that compares people’s Centrelink payments with their tax records. The system is issuing debt notices of $4.5 million a day in overpayments that most likely came from people incorrectly updating their payment or other details.

Melbourne: Prime Minister Malcolm Turnbull will meet with Indian mining giant Adani CEO Gautam Adani to discuss the Carmichael coal mine the company wants to build in the Galilee Basin. It’s been reported today that Turnbull will pledge $1 billion for the $2.2 billion rail line to move coal from the mine to the port, to be sent to India. Environmental groups plan on protesting outside the meeting.

Darwin: The Royal Commission into the Protection and Detention of Children in the Northern Territory resumes public hearings in Darwin today, with the hearings scheduled to continue until December 14. The Royal Commission will first hear from Keith Hamburger, author of a recent review of NT’s Department of Correctional Services.

Canberra: Environment and Resources Minister Josh Frydenberg will announce a review into the government’s climate policy (see above).

Canberra: UN Special Rapporteur on Racism Mutuma Ruteere will share his preliminary findings and recommendations after his follow-up visit to Australia to gather first-hand information on racism, racial discrimination, xenophobia and related intolerance in the country.

Brisbane: Judgment is set to be delivered in a case brought by Lex Wotton more than 12 years after riots on Palm Island followed the death of Aboriginal man Cameron Doomadgee in police custody. The Federal Court will rule on whether the police breached the Racial Discrimination Act during the riots, in a judgment that could open the state government up to compensation claims.

Australia pulled off a special victory against New Zealand in Sydney yesterday, winning by 68 runs. But it was all about captain Steve Smith, who wasn’t happy just to break the record for most runs ever scored in a One Day International at the SCG with a knock of 164, but also a catch that has to be seen to be believed.

M is for meeting, with the Reserve Bank talking economy for the last time this year tomorrow, but no move in interest rates is expected. The following day the third-quarter National Accounts and GDP figures will be released.

Turnbull needs to look right and then march on — Jennfier Oriel (The Australian $): “If the centre-Right is to hold, he must adapt by bringing high-performing conservatives from the backbench into cabinet. Two names should be at the top of his Christmas list: Tony Abbott and Andrew Hastie.”

There is a straightforward fix for section 18C — George Williams (Sydney Morning Herald): “Parliament should adopt the suggestion of Justice Ronald Sackville that section 18C apply only to language that will ‘degrade, intimidate or incite hatred or contempt’, taking into account reasonable community standards.”

The data is telling our governments that school performance is not good enough — Tim Dodd (Australian Financial Review $): “At least a quarter of high school maths teachers are not fully qualified to teach the subject, says Australian Mathematical Sciences Institute director Geoff Prince. Amazingly governments don’t record data on this, so how can they plan to improve maths teaching?”

Journalists cheer as bullies triumph in federal parliament protest — Andrew Bolt (The Daily Telegraph $): “Around Australia, we see the rise of a totalitarian Left that thinks the best way to debate is to stop others speaking. Socialists have physically attacked Foreign Minister Julie Bishop and former Liberal MP Sophie Mirabella.”

Italians are voting on a referendum to reduce the size and power of the nation’s senate. Backed by centre-left Prime Minister Matteo Renzi, the poll is seen as the latest test of rising populist sentiment in Europe. Right-wing and anti-immigration opposition groups have rallied for a “no” vote. Renzi has said he will resign if the referendum fails. — BBC

Voters in Austria have rejected far-right Freedom Party’s Norbert Hofer in the country’s presidential election, electing the Greens Party’s Alexander Van der Bellen 53% to 46%. Constituents are voting for president for a second time this year, after a May poll was overturned by the country’s highest court, forcing a re-run. While the office is largely ceremonial, the choice between Van der Bellen and Hofer also has symbolic importance. — BBC

As many as 40 people were killed after a warehouse party in Oakland, California, became a deadly firetrap. The party was organised by labels and producers associated with Los Angeles’ independent electronic dance scene. It is believed the location was decked out with highly flammable materials and that no sprinklers were installed. — LA Times

A fake US embassy selling illegally obtained visas has been shut down in Ghana. The embassy had been advertising the visas in multiple African nations and even had an portrait of Barack Obama on its walls. — Reuters

Australian race relations made international news over the weekend, with The Washington Post covering the issues around Sudanese migration and youth crime in Melbourne — a city the paper described as “a predominantly white, Christian city in the southeast of the continent known for its coffee shops and love of Australian Rules Football”. — Washington Post 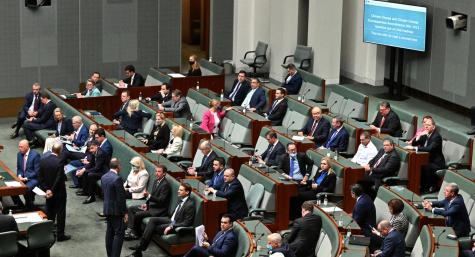