Mistakes in our DNA. At Crikey we’ve been enjoying Professor Judith Sloan’s transformation into a vengeful deity hurling thunderbolts at the Turnbull government, but the good prof appears either to have got muddled or — we think more likely — been the victim of some rotten subbing in Saturday’s edition of The Australian. Sloan slammed the government for “coming close to complete incompetence” on the budget but, in doing so, came a cropper herself:

“The deficit for this financial year — a period that covers Scott Morrison’s first budget and Turnbull’s first (financial) year as Prime Minister — is expected to be about $37 billion. It’s a pathetic effort and amounts to 25.8 per cent of gross domestic product, which is the same ratio as the previous year. Using the most optimistic assumptions about the growth of nominal GDP as well as company and income tax receipts, there is an expectation that the budget deficit could shrink to $6bn by 2019-20 or 25.2 per cent of GDP.”

Alas, the budget deficit is not 25.8% of GDP and isn’t shrinking to 25.2% of GDP — that figure is the current level of government spending and its forecast reduction in coming years (see Table 1). The budget deficit this year is forecast to be 2.2% of GDP. While we agree entirely with Sloan that it’s appalling a government notionally with “surpluses in our DNA” is still spending at almost the level that Kevin Rudd did in the face of the financial crisis, someone has got the wrong end of the stick.

Keep the meter running. In last week’s MP and senator expenses info dump, Queensland MP Bob Katter was reported as one of the biggest spenders, especially when it came to use of Comcars. Katter’s electorate of Kennedy is two and a half times the size of Victoria, meaning that Katter has a lot more ground to cover than your standard suburban MP — his charter flights clocked in at $34,392.46. While the greater distance accounts for much of the cost, a tipster shared a story with Crikey of Katter holding a press conference with local journos — while the waiting taxi had its meter running. And while Katter is known for the soundbite, he’s not one for a quick grab.

Adani coming to Townsville. Ahead of Adani CEO Gautam Adani’s meeting with Malcolm Turnbull today, the Townsville Bulletin is reporting that the company is set to base its headquarters in the north Queensland city. According to the report, Townsville is set to gain new jobs in what would be the first time a mining operations centre was built outside a capital city. We’re sure these new jobs will be just one of many things Adani will bring up with Turnbull as he lobbies for the Australian government to chip in $1 billion for the rail line required to move the coal to the port and out of the country. It also means approval and support of the mine could become a major election issue for the people of Herbert. In this year’s election, Labor’s Cathy O’Toole won the seat from the LNP’s Ewen Jones by just 37 votes after a recount.

Young Nazis in Melbourne. A new brand of neo-Nazis is making its presence felt at the University of Melbourne, with a series of posters appearing across the Parkville campus this weekend using four racial epithets and the terms “stop the hordes” and “keep Australia white”. It features the swastika and references the group’s website. The group is the same one that was responsible for posters calling for gay people to be killed that were distributed at Swinburne University in Melbourne in October. The group, called Antipodean Resistance, has very little online history and claims to an Australian youth National Socialist organisation (that would be the original Nazis, no Godwin required). There’s no information as to who is behind the group or how many people are actually involved. 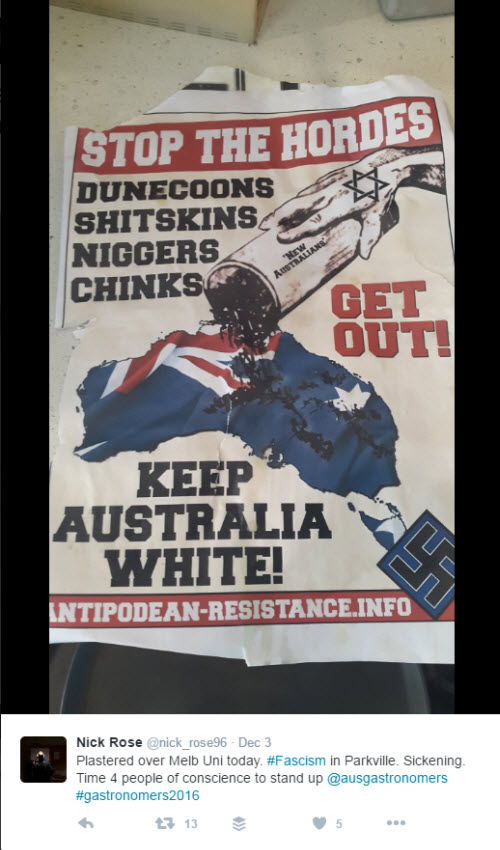 Press gallery makes own politics (plus Sour Grace). The year is winding to a close for the nation’s political journos, but one more bit of politcking has to be sorted: the annual elections for the press gallery committee.

Snapper Andrew Meares is continuing as president, with the Fin‘s Fleur Anderson continuing as VP. Andrew Tillett is the 2017 treasurer, replacing long-running treasurer Nick Haggarty, while Jane Norman is secretary.

Voting for these things, more or less, tends to take place with voting block. A hefty proportion of the press gallery is employed by the ABC, which means they always get their man or woman up. Though there’s a growing number of smaller, digital media outlets in the gallery these days — Karp is expected to pick up most of those votes.

The press gallery committee gets to do fancy things like decide who gets to join the gallery — thus guaranteeing media access to Parliament House — as well as planning the Midwinter Ball and various other functions. The press gallery seal is usually enough to ensure one is automatically invited to various political functions — which it appears unionist-turned-conservative IR warrior Grace Collier would have appreciated in recent days. 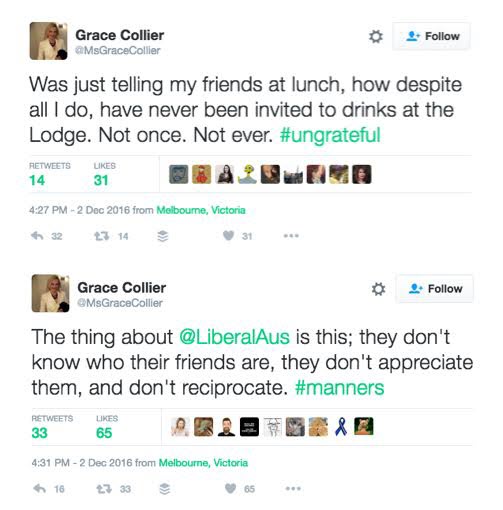 When people tweeted their incredulity at her, she told them to take a joke.

Mistakes in our DNA

If there any form of industry assistance more egregious than the taxpayer picking up even $1 of the tab for a railway line to cart coal to the coast, can you please let me know.

For any mining project in fact. If it ain’t transportable and viable within the current market price, then it isn’t viable. Government should not be paying twice, once with a $1b grant and then billions more in the tax deductions/write-offs. All for 200 jobs in Townsville and a batch of jobs for a few years in construction phase? The government assistance per job over the lifetime of the project would make any car maker, or submarine boondoggle, blush!

Sloan – again – a Murdoch Limited News conservative commentator …. who just happens to have a degree in economics (= “gravitas”?).
Imagine if it was a Labor government doing what her Limited News Party favorites are – her judgments would have to be handed down on asbestos?

Having watched Collier a few times on the ABC…like Q&A…I don’t think she is joking in these tweets!!
However, she is just another fecking ejeet who wouldn’t know what day it is…unless someone told her. In fact, from what I have observed, Collier has NOTHING intelligent to say about anything…especially not IR!!!!!!!

Collier pedals the same union cycle as Rupert
Her guest appearance on Lateline July 8 2015 was a classic – I wondered what unions had done to her. She sounded like a Kathy Jackson clone?

Graceless deColletage (let’s not forget her criticisms of Gillard’s cleavage) has always claimed, despite raucous laughte all around, that she is not anti labour.
Perhaps as the Sloane Deranger is not a real professor, she’s an adjunct at the IPA which, with $4 will get a cup of coffee.