This is how the world (and the ABC) ends …

Not with a bang, but with an axed science program.

There was a lot for a person like me to admire in Rundle’s Wednesday essay on Trumpism. But it’s Thursday now, which is not a day to praise a fellow, but to bury him with a fragment of his own speech. We could not know things “would happen so forcefully, so soon”. Of all the quotes in a quotable piece, this was, for mine, the true terror. Things now resolve faster and more gravely than even the pessimist imagines.

The withering of ABC’s science program Catalyst is not a Trump-scale accident. It is, however, one of those things that happen just before something else does at great and ugly speed.

Every big thing has a flaw built into it, and the character of this flaw can only be revealed in historic disaster. The flaw of the US is its expansionism, and the disaster is large numbers of people demanding that it stops. But, more broadly, the flaw of our age could be said to be its velocity. Now, things happen just so forcefully, so soon.

People who have specialised in all sorts of jobs know this very intimately. You work in the textile industry, car manufacture, even in a call centre, and you see your labour outsourced first to the Global South, then to automation. You work, as I do, in media, and it happens not in precisely the same way, but almost as fast.

This week, I was speaking with a former Fairfax colleague about how hard it was to earn a dollar. We were recalling the accelerated death of The Age. This marvellous thing that had served the people of Melbourne for 150 years, had called leaders to account and influenced millions to eat, loathe and enjoy particular things, was not even a shadow of itself, but a shadow of the Herald Sun. How did this happen? How did we let this happen?

It happened. How we let it happen is the focus of a number of books, all of which mention, at least in passing, the speed of our era. This is our defect. We can control the course of a media business little more than we can control the issue-attention cycle these businesses have lately themselves been in the habit of accelerating.

When media report on other media, the flaw becomes more evident. We are, I think, headed for an ABC accident, which will unfold forcefully and soon.

There are some good analyses on ABC MD Michelle Guthrie, one by journalism researcher Margaret Simons and another here in Crikey by Bernard Keane. But these, which both mention the trusted status of the ABC, were filed months ago. Since Simons and Keane wrote down their cynical but fair assessments of an executive enamoured of the Google era’s falsely democratic lingo, two hints of disaster unfolded.

The second is the end of Catalyst as we know it. And, sure, the program has had some truly unscientific moments in recent years. But even scientist critics of the infamous statins episodes or the pseudo-scientific wi-fi Causes Brain Cancer malarkey urge for its reinstatement. Catalyst wasn’t (always) a program that urged us to honour scientists in the way that, say, Hillary Clinton so disastrously urged the people to honour technocrats. It was (sometimes) a show that actually explained science.

Philosophy. Art. Science. These are the historic practices of which we should be most proud, of which we are most proud even if we don’t concede it, and if our institutions fail to honour them, or take a dump on them, then we lose our trust in these institutions. Keane is right when he says that the ABC remains among our most trusted institutions. But we need to ask, for how much longer?

It is tempting to see the change in Catalyst as a plot, to think that Guthrie is a shill and the CPSU’s tepid response to the end of this important program is evidence of its complicity with the bosses. But it’s not a conspiracy; it’s a disaster waiting to happen.

The trust Australians have in the ABC is dwindling, making way for a media disaster. And the disaster will not be that there are ads on the ABC, something that Guthrie has, in any case, ruled out. It will just be that we no longer give a shit, and even if there is another Don Dale expose — itself a report that largely failed to locate those terrible indignities in a broader policy context — we simply will not care.

It will happen forcefully. It will happen soon. We will not care to defend something we no longer trust. The ABC will be trusted only as the official emergency broadcaster of natural disaster, its own disaster already in the past.

Correction: an earlier version of this article erroneously attributed funding for a cooking program to Screen Australia. The author accepts responsibility for a hasty oversight, which was supposed to say something else, and is now gathering sun-dappled heirloom tomatoes from her garden as penance.

Razer’s Class Warfare: defend the ABC with politics, not anecdotes 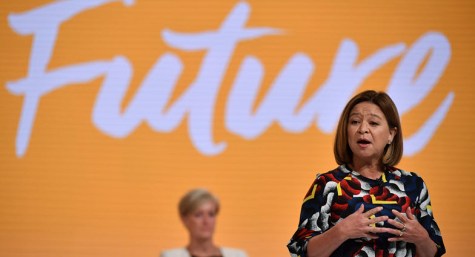 Many sadly will share what is said about the ABC. It desperately needs to listen to its natural listening and viewing audience. Not only has Catalyst gone but the religion programs are much reduced just at a time when fundamentalisms flourish (not only among a Muslim minority but also, for example, in much of my own (Anglican) Diocese of Sydney, and when intelligible knowledge of religions is more important than ever – hand in hand indeed with basic understanding of science and its discoveries and insights.

Intelligible knowledge of the raw teachings, perhaps. The religious institutions can burn to the ground for all the world cares.

Yesterday, half of the professional science journalists working in Australia were sacked by the ABC, victims to its pitiful and pathetic middle managers, the very same people that thought Silvia’s Table was a great way of spending the tax payer’s money.
Our world is complicated, the pace of change bewildering, and in times of angst, people turn to demagoguery and charlatans. The ABC is now complicit in the surrender to post-truth, anti-science sentiment. It totally misunderstands the crucial role it plays in Australia society to help us make sense of a confusing world. If a publically funded broadcaster just surrenders itself to the age of stupid, like the tepid remains on the rest of the mainstream media, then its loses its reason to exist. This is a shameful day–and as Razer warns, a premonition.

You could not have chosen eleven more impactful words Helen. “We will not care to defend something we no longer trust.”

Knowing, as a ABC supporter of many decades, that indeed ‘the fix is in’ and we but await conclusion; chokes ere more that somehow loyalties morphed, become complicit, an end we deplore . . . . and rage against.

The ABC is being eaten from the inside, out, by twisted egos.

K, I tend to think in all large organisations, including the ABC where I worked for a total of twelve years, that it’s not individuals and their egos who ensure the decline. Sure, they can accelerate it. But the path dependency is itself organisational.
People build tracks, not even knowing where they’ll lead. And they might even do these things for very selfless reasons. Like, outsourcing is not in itself a bad thing to do, but is a great way to make better use of funding for the stakeholders, for example. It is done in the best spirit. But what it leads to is an accident.
I do understand what you are saying and there is no harm, and often much good, in calling individuals to account. But the thing is just built that way. It’s built to break, like America.

The individual is the manifestation we get to see, and judge.
The decline in standards, objectivity and impartiality, which seems to be allowed to go on in some chase for entertainment, ratings, even “relevance” – and some search for some “acceptable impartiality” (that mollifies other politicised parts of msm) to the point of giving over too much to one side. The sort of thing that management should be managing – but doesn’t seem to be.
Two examples of the carrots (of many) in the last week’s vomitus :-
The Drum last Thursday :- Jackie Kelly going after Tasneem Chopra over “racism” and 18C?
Kelly? ‘The Howard minister whose husband was caught letter-dropping “Thank You notes from Muslims to Labor” around Lindsay, days before the ’07 election’ – no one thought to mention that part of her c.v. to the audience, with that topic due for consideration?
Last night Lateline (after Tuesday’s – with Brendan O’Connor) – Alberici – allowing Joyce (who, as a Qld Senator, wrote off a $95,000 Toyota Landcruiser commcar, crossing a flooded road while on his way to his NSW property;
who wrote off attendances at weddings and parties as “work”, so slug tax-payers with theout of pocket expenses to attend those private functions and
who is relocating the APVMA to his New England electorate/Armidale at a cost of $25 million, as well as whatever it costs those families to sell-up and move) to whinge about those “selfish” protesters and Shorten’s “hypocrisy”? The night before she didn’t miss a chance to pull O’Connor up?
Then there’s the sweet and sour approach to politics of Leigh Sales, Lane etc? The Leigh-way she gives the Limited News Party compared to the bastinado reserved for Labor, The Greens or the likes of Triggs?
If we wanted that sort of “gerbalism” we’d buy Rupert’s Bog-rolls and watch A Currant Affair.
They seem to be being steered down hill?
Any wonder we’re losing faith in politics and the media at the rate we are?

“pseudo-scientific wi-fi Causes Brain Cancer malarkey.”
It took 350 years to determine that tobacco was bad. About 50 years for asbestos. About 20 years with thalidomide.
We are getting better. How long for wifi? Meanwhile, ask your co-workers how many have an ear ache after phone use? What causes that?

Precisely my thoughts. It was breathtaking to witness the speed at which the wi-fi/mobile phone episode was torpedoed. ABC management leapt to assure viewers the claims were questionable – as are the claims that wifi is perfectly safe.

Some value could be wrung from re-runs of Silvia’s Italian Table if it’s promoted as a self-spoof.

“wi-fi/mobile phone episode was torpedoed”
Careful Zut. You might get labelled one of those nutter conspiracy theorists. Is Bernard reading this? But you are right. This was probably the straw that broke the Camel’s back.

Holding the phone against your ear too hard for too long? It happened with my wall phone when I was a kid, but they were better formed for the ear.

Come of it Verity. The inference is radiation poisoning. Not pressing a plastic handle against your ear.

“It took 350 years to determine that tobacco was bad”
No. Just to act on it.
“About 50 years for asbestos”.
In the early 1900s Lloyds of London were refusing to insure asbestos workers. In the 1950s salesfolk were talking about the “good asbestos” and the “bad asbestos” in denial of it all causing problems if allowed to get into the lungs.

Nice work, DB. That “science” is blamed not only for the fact that it evolves, but that its evolution is wilfully ignored by policy makers and capitalists (the true policy makers) is too easily forgotten.