Merry Christmas, here is some violence ... how to glue and unglue yourself in Parliament ... job losses at Western Sydney Uni ...

Bill Shorten’s Christmas Greek tragedy. While Labor leader Bill Shorten got the chuckles in this morning’s end-of-year speech in Parliament, he has made an awkward gaffe in the Christmas card sent out to constituents in his electorate in Melbourne’s west. According to a Facebook post by Konstantinos Kalymnios, the card wished “Season’s greetings” in many languages, but not Greek — a community Kalymnios says is “very old and numerically significant”. The languages included were Arabic, Chinese, Vietnamese, Maltese, Italian, French, Korean, Turkish and Croatian, according to Kalymnios’ post. He writes:

“Many of the Greeks of the electrorate, most of whom have been Labor supporters for decades, have expressed the opinion [that] they are no longer considered important enough to have the greetings of the season extended to them. It should be noted that this electorate covers 4 significant Greek parishes – Panagia Soumela East Keilor, St Demetrius Moone Ponds, Agia Paraskevi St Albans and Apostolos Andreas Sunshine. it should also be noted that the Greek community of East Keilor constructed the building which [is now] used as the Maternal and Child Health centre, on Milleara Road, East Keilor.”

Kalymnios added on the end of the post that Shorten’s office has confirmed that the lack of a Greek language Christmas wish was an oversight and letters of apology would be sent. The Greek community plays an important role in the Labor Party in Melbourne; in some safe Labor seats in the inner north and west, branches are seen as “Greek” branches, while others are “Turkish” or “Lebanese” branches. 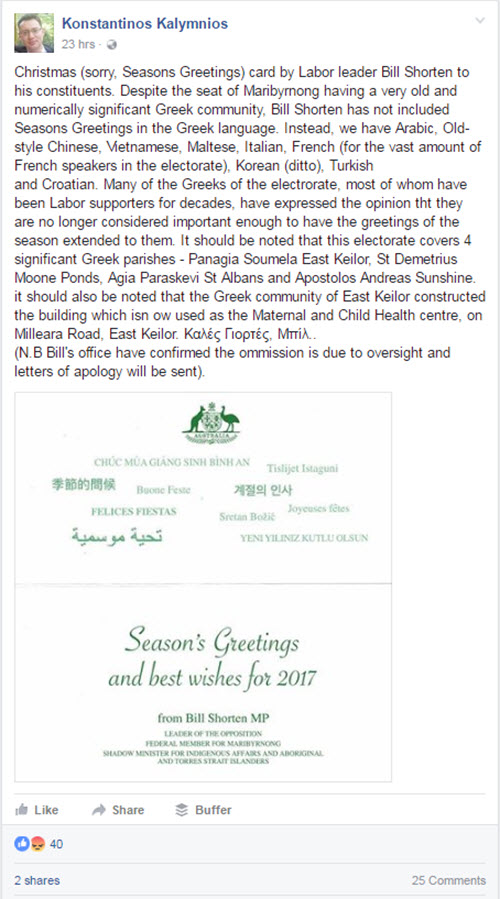 In other Christmas card news, we hear that Pauline Hanson’s card uses the same cartoon of Hanson and her colleagues that features in a poster outside her office. Liberal MP Andrew Hastie, a devout Christian, includes a quote from Isaiah on his card, which is quite a bit more fire and brimstone than general Christmas messages. It reads:

“Every warrior’s boot used in battle and every garment rolled in blood will be destined for burning, will be fuel for the fire. For to us a child is born, to us a son is given.” 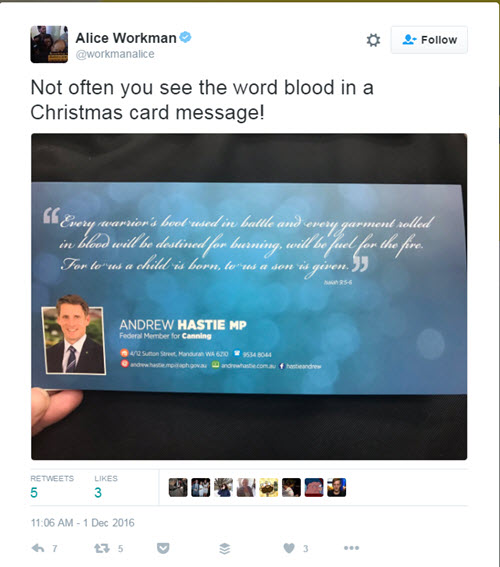 When the passage Hastie is quoting ends on the much more uplifting “and the government shall be upon his shoulder, and his name shall be called/ Wonderful Counselor, Mighty God,/ Everlasting Father, Prince of Peace,” it seems strange to go with blood and boots.

“The University is currently assessing the 200 applications received and staff retiring as part of the Early Voluntary Retirement program will do so by the end of 2016. The University is working with Schools and Departments to develop work-plans to manage vacancies.”

The university hasn’t confirmed which departments the retirements will come from, but did say that participation in the program was “voluntary and at the discretion of eligible individuals, and a range of tax concessions were available as part of the program”.

The spokesperson says the Deloitte report is separate to the early retirement program, but it foreshadows further possible job losses:

“The University is currently working with Deloitte in a separate program to review the delivery of professional services across the University. A range of consultation has been conducted in the early stages of this review, which will continue into the first quarter of 2017.

Hanson cancels Jewish event. One Nation’s Pauline Hanson and Malcolm Roberts were set to hold an event with members of Melbourne’s Jewish community on Sunday, but cancelled it yesterday citing security threats. Hanson wrote on Facebook:

“While there were threat towards myself and Senator Roberts what worried me the most was that people attending may have come to harm. I didn’t not want any fights to break out between protesters and my supporters. That was a risk I could not accept. This was the main reason I had to cancel this event.”

Roberts also posted on Facebook about the cancellation, writing:

“Peaceful protests are a very welcome and acceptable demonstration of our democracy. Violent and intimidating protests against a peaceful Jewish community wanting to hear Pauline and I speak is unAustralian.”

The event was to be hosted by a new group called Independent Jewish Council of Australia, a conservative group founded by Avi Yemeni, a gym owner known for recruiting members of his gym to fight with the Israeli Defence Force. Yemini told The Age he had invited the senators to talk about issues with Islamic immigration and section 18C of the Racial Discrimination Act. The event was originally meant to take place at Glen Eira Town Hall, but it was moved to a pub when the council decided they didn’t want to be associated with it. Protesters have disputed Hanson and Roberts’ claims they had to cancel due to threats, with protest organiser Jordy Silverstein saying in a statement:

“While Roberts and Hanson have cited security concerns as their reason to cancel we think this is bogus. We were planning in cooperation with the Victoria Police a peaceful and safe protest. The real reason the event was called off was the extent of Jewish community opposition to the event.”

Superglue is the new padlock. Chaining yourself to a bulldozer, tying yourself to a tree, sitting down in the middle of a busy intersection — nothing shows a protester’s commitment to a cause like the act of stubbornly getting in the way. Yesterday’s parliamentary protesters slowed things down by supergluing themselves to the stone railing of the public gallery in the House of Representatives. Superglue’s bond forms a kind of acrylic resin, which is why it’s so hard to unstick. One of Ms Tips’ colleagues has had many a mishap with superglue — the colleague would not elaborate on the reasons behind this —  and tells us that the quickest way to dissolve superglue’s plasticky bond is to use acetone, which can be found in nail polish remover or at your local hardware store. It’s unlikely that the highly flammable chemical would be allowed in Parliament House, so security had to make do with the next best option: hand sanitiser, which is made up of a mix of alcohol and water. Would protesters have been better off using rubber cement?  It forms a less brittle bond than superglue does. If anyone has any better suggestions, let us know.

Why two ‘m’s in omission? Was it an omission not to use a spellcheck before sending out a comment on Bill Shorten’s office omitting to include the Greek translation of ‘season’s greetings’?

Clearly English and comprehension are no longer taught at West Sydney Uni, “a service-focused, innovative and sustainable approach to professional service delivery for the University.“, else they’d not have tolerated such PR drivel.