A brief history of protest at Australia’s seat of government

Were yesterday's protests really the most disruptive since the ACTU riot in Parliament House?

Since Federation, hundreds of protesters have made their way to Parliament  House to protest government policy in the place where it is made. Here’s a brief rundown …

While Canberra was built, Australia’s Parliament sat in Melbourne. But from the opening of Old Parliament House in 1927, it served as a site for protest. Wiradjuri men Jimmy Clements and John Noble walked from the Brungle Mission in New South Wales (a journey of 150 kilometres) to attend the opening ceremony. The police objected to their shabby appearance and the dogs at their feet, so tried to move them on, but the crowd took the side of the Aboriginal men, arguing that they should be allowed to stay. Which is what happened. The Argus reported that “an ancient Aborigine who calls himself King Billy and who claims sovereign rights to the federal Territory walked slowly forward alone and saluted the Duke and Duchess”.

It was the first of many indigenous protests at Parliament House. In January 1972, four Aboriginal men erected a beach umbrella on the lawns outside Parliament and put up a sign that said “Aboriginal embassy”. It attracted many supporters, allowing it to maintain a permanent presence on the lawns. Those who maintained it, presented the McMahon government with a list of demands, which included legal title and mining rights on Aboriginal land, compensation for lands that couldn’t be returned, and the preservation of sacred sites across Australia. In July 1972, police moved in to demolish the embassy, arresting eight people in the process. But it was re-established, and Aboriginal activists continue to maintain it decades later. 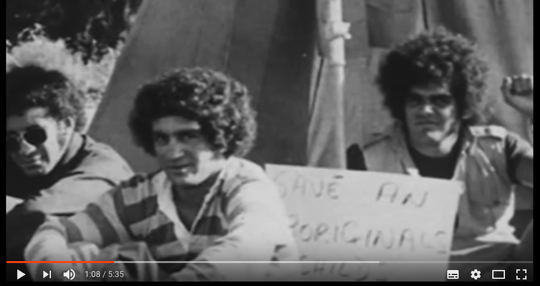 When Queen Elizabeth II came to Australia in May 1988 to open the new Parliament House, a noisy protest by Aboriginal people and their supporters could be heard across the forecourt. The founder of the Democrats, Don Chipp, said at the time this was a wonderful thing:

“In how many other countries on this planet would such a hostile open exhibition of dissent be allowed to proceed in full view of the reigning monarch? In a rather strange way, this outside phenomenon seemed to give real meaning to the many references being made to democracy in the speeches being delivered inside.”

The first moratorium marches against the Vietnam War took place in May 1970, and quickly spread to Parliament. During a visit by US vice-president Spiro Agnew protesters were carted away by security forces at (Old) Parliament House.

In August 1989, a retired army officer sitting in the House of Representatives’ public gallery got up and said he wished to speak, claiming it was his right under the constitution. He then stepped to the front of the gallery and dropped down to the floor of the House, where he was considered “a stranger”. He was escorted out before he got a chance to say anything, to applause from the galleries. The then-speaker Leo McLeay chided the applauders, saying:

“Those people in the gallery who think this is funny have really made a big mistake about the way they think the government and the Parliament of their country should be run. They should be ashamed of themselves for complimenting someone who has indulged in such action.”

Fighting for the caterers

“Commonwealth car drivers decided not to cross the picket line as they collected or delivered parliamentarians. Despite the cold weather at the time, most MPs were prepared to walk to or from their cars, including Prime Minister Hawke, who trudged by wrapped in an overcoat. By contrast, Senator Jocelyn Newman (Tasmania 1986-2002) would not leave her car when her driver refused to cross the picket line. Newman sat in her car for 75 minutes as a matter of principle, before accepting a ride from a Senate transport officer who drove down to collect her.”

It wouldn’t be the only time roads were blocked in protest. In January 1995, more than a hundred logging trucks turned up to Parliament House, where they blocked all the roads in and out, forcing people to make their way to parliament by foot. They were there a week, in protest of the government excluding large tracts of native forest from being logged. Clive Hamilton in What Do We Want: The story of protest in Australia described the blockade as “considerable show of force”, to which “the parliament’s presiding officers and the police took a hands-off approach”. “Prime Minister Paul Keating buckled under the pressure, agreeing to amend the licence governing the flow of logs to the Eden woodchip mill. Both sides described the Keating backdown as a huge win for the industry.”

A year later, a 30,000-strong rally in Canberra organised by the ACTU took a rowdy turn when some protesters tried to force their way into Parliament House, in contravention of a deal between union organisers and the police that the rally would go no further than the lawns. They used sledgehammers and metal pipes to force their way into Parliament. They were held back at the internal doors, but tried to get in through the Parliament House shop, which was ransacked and badly damaged in the process. About 40 people were arrested, and 90 police injured.

The protests were organised against then-prime minister John Howard’s attempts to introduce a decentralised bargaining structure to Australian workplaces. The union movement was strongly opposed and organised a “Cavalcade to Canberra” in response. Opposition leader Kim Beazley and the ACTU’s Jennie George, addressing a more peaceful rally on Parliament House lawns, were embarrassed when a bloodied CFMEU official, Davie Thomason, mounted the stage waving a police shield and yelling “look what we got from the coppers!” John Howard and Peter Reith couldn’t have ordered a better display of their stereotype of unionists.

The violent turn of the protest was condemned by both sides of politics, including from Labor’s John Faulkner, who slammed the “appalling violence”, and Kim Beazley, who said the rioters were “lunatics”. Howard blamed the ACTU.

In 2001, Shahraz Kayani, a Pakistani refugee engaged in a fruitless battle with the government for six years to bring his family to Australia, doused himself with petrol and set himself alight in front of Parliament House. He died some days later with burns to 50% of his body.

Reports at the time stated that the attempts by Kayani’s wife and daughters to join him in Australia were “rejected [by the Department] on the grounds that one of his daughters suffers from cerebral palsy”.

In 2002, three members of Greenpeace tried to climb Parliament’s 101-metre flagpole. It was a windy day, and they weren’t able to quite get to the peak, stopping 21 metres short. Still, it was high enough for one of them to abseil down the front unfurling a banner slamming Australia’s refusal to ratify toe Kyoto global warming protocol.

On March 17, 2003, John Howard said that Australia would be participating in the Iraq War. The day after, wailing song could be heard in the building. The musical lament had been organised by Glenda Cloughley, a Canberra resident who organised 150 women to scatter themselves through the highly resonant marble foyer. At 1pm, they began to sing in sorrow.

The choir formed that day still exists, and it continues to sing in public areas of government buildings in Canberra.

Then-federal opposition leader Tony Abbott himself addressed anti-carbon-tax rallies outside Parliament House in August 2011, where he was photographed with  Sophie Mirabella and Bronwyn Bishop in front of inflammatory placards against then-PM Julia Gillard, including “Ditch the Witch” and “Juliar … Bob Brown’s Bitch”. Also addressing the crowd was radio host Alan Jones, who told those assembled that convoys of protesters had been stopped by police at the Canberra border (police did no such thing). In October 2011, protesters even made their way inside the chamber, disrupting question time (though, lacking superglue, they were promptly removed). Then-speaker Henry Jenkins told them access to the public gallery was a privilege … 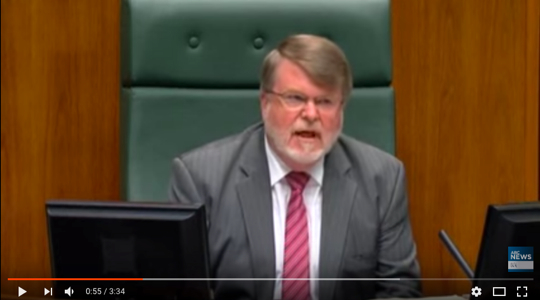 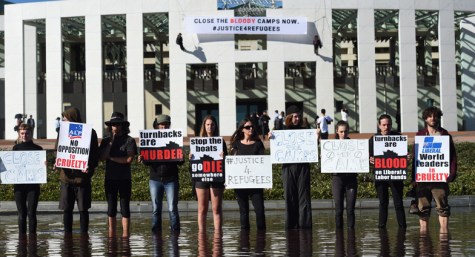 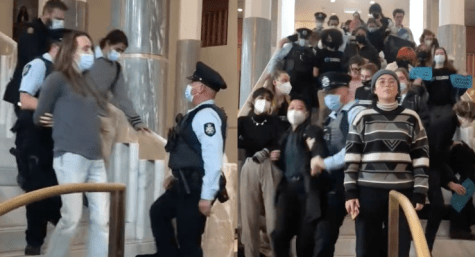 I watched the protesters yesterday. Good on them!

The best part, though, was the concerted rush for the door by the coalition members. What a bunch of hysterical cowardly pussies! The only concerted thing they’ve done this session! What on earth did they think was going to happen?

And finally there was Pyne with his usual sanctimonious hypocrisy, trying to look like he had control of the situation while shaking in his booties.

It’s typical though, isn’t it? Labor knew what was going on. They know a peaceful protest when they see one. As did I, having taken part in such things in the 1960’s and 70’s. Not our coalition members, though. Not a clue, and concerned only with the safety of their fat asses. Not concerned with the subject of the protest. Just grotesque, they were. Very revealing.

If you haven’t watched it, try and do so. It was by far the best television of the day, and revealed members of the LNP for the self-absorbed, fearful-of-everything, born-to-rule fools they are.

That would be Harry Jenkins!

I suppose Tiddles Pyne attended that “Ditch the Bitch” tea-party, with most of the rest of his Coal-ition ….?

I would have joined them! Too far away…dam it!!