Australia's ex-servicemen have a much higher rate of suicide than other Australian men, a new study confirms -- and younger men in particular are at risk.

The Australian Institute of Health and Welfare has confirmed that former servicemen have higher rates of suicide than Australian men overall in a new report released this afternoon. 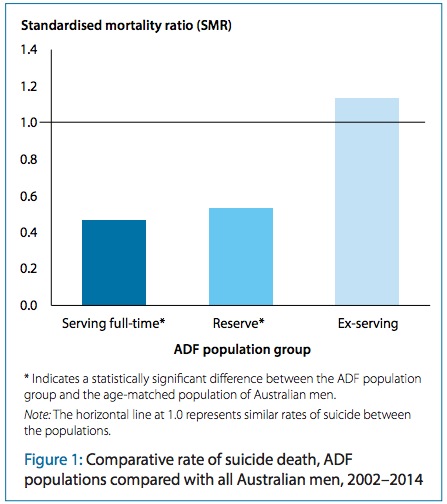 Any ex-serving member would know that once you have finally decided to leave the services (despite the feigned protests), the military establishment drops you like a hot potato and even worse, treats you like complete shit. It’s hero to zero and worse; some personnel are left languishing in hold-over units for months without any support or positive direction – yard duties, kitchen duties and back in the day, painting rocks.
Sadly, there’s no surprises in this article.

As an ex ADF member, I’m well aware of the prevalence of suicide – particularly of those with combat experience. But you need to go back to school on basic statistics. 142/292 is 48.6. That is a minority by any stretch of the imagination. And without going back to your primary source, the chart suggests the difference between ex service and men at large is not statistically significant

In the article “New Study confirms suicide higher for veterans” it seems that the graph does not match the claim of the heading. The graph shows that while the suicide rate of ex-serving ADF appears to be higher than that of the aged-matched population, it is not significantly higher, meaning that there is no real difference. However, the suicide rate of those serving full time and in the Reserve have significantly lower suicide rates than the general population, indicating you are less likely to commit suicide in the army that out of it. The text says that suicide rate of those serving full time was 53% of age-matched population, and that of reservists was 46%, but the graph indicates that these numbers are vice versa.

Point of (scientific presentation) order: Normally love your graphs, Bernard, but this is a tricky one. As the note states, similar rates of suicide are a ratio of one, so it would be more correct for the bars to originate from this line. Thus lower rates of suicide compared with all men are bars going down and increased rates are bars going up. Also, if the y axis is in a logarithmic scale, the negative and the positive will be the same height for the same change in ratio e.g. a ratio of 0.5 (two fold down) will have the same size bar as a ratio of 2 (2 fold up). A ratio of 0.0, the current origin, cannot exist.

The take-out from this surely is that people who sign up have personality problems – else why do so? -which become worse once they shed the uniform and have to deal with reality.

Sigh – the crikey comments are usually not visited often by trolls